So Funny It's Not Funny Comments (0) 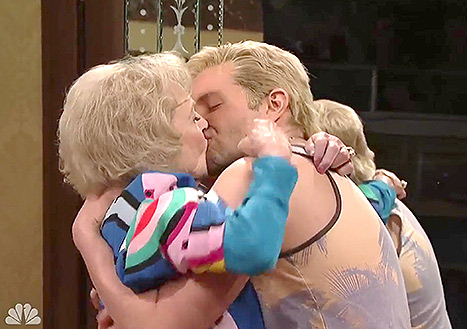 Bradley Cooper (looking exactly like Ryan Hansen) laid one on Betty White during an otherwise interminable skit during last night's SNL 40th anniversary special. It was amusing because they really went for it. The kiss, not the show.

The show was...depressing. Not sure why? It just felt like less a celebration than a memorial service, and I think the black-tie crowd lent to that. Paul McCartney sounded really rough, which didn't help.

I think what really killed it for me is that it had a barrage of fragments from so many amazingly funny skits that put me in the mood to actually revisit them, but instead of offering up vintage fun, it would instead focus on unfunny tributes to some of the show's legendary entertainers. I mean, yay, Chris Rock admires Eddie Murphy...but why couldn't there be something funny for Murphy to then do about that?

And the new live stuff mostly sucked. All the celebs in the world don't make unfunny stuff funny.

I did like those short clips, and I have to say that Bill Murray was hysterical singing the love theme from Jaws.

Rolling Stone has a list of the 141 cast members ranked from best to worst. It would be hard to argue that the Top 3 are undeserving (but Mike Myers at #4???), yet I think Bill Murray belongs at the top. Poor Robert Downey Jr.!

I think the special worked as nostalgia but failed as comedy.