Tard Nation: A Review Of HOUSE OF TARDS Comments (0) 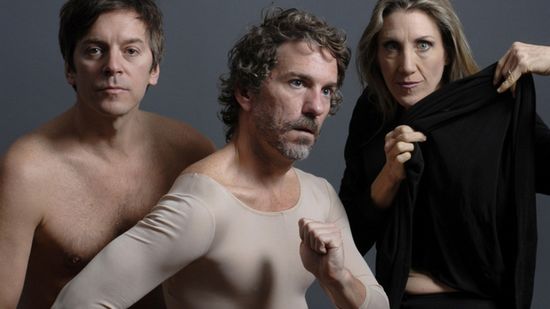 House of Tards is the second biggest riot the Stonewall Inn has ever seen.

The revue, by three-person comedy team Unitard, is a series of sketches that do what Second City and SNL have always done, but haven't done well in decades. That's why the show feels classic and brand-new at the same time.

Made up of Mike Albo (who generously flashed scrotum and bare ass the night I saw it for no reason except thank you), Nora Burns and David Ilku, the performers do pieces solo and together. They don't go there, they start there.

The show's best bits are painfully funny routines about NYC's dying downtown scene (Debbie Harry, who opens at the Carlyle shortly, was in the front row) and the phenomenon of grief tourists on Facebook who suddenly become a famous person's biggest fan once they're dead. That's Unitard's forte, identifying social trends and deciding, with humor, what they mean.

Unitard has fangs, but everybody has fangs these days. The difference is that Unitard has the brains to know how and when and if to use the fangs, and also the heart to try stuff that is definitely going to rub some people the wrong way.

Precious little of House of Tards fails to amuse (a terrorist stand-up act was both brilliant and gross, but was ultimately too distractingly interesting).

There is no MVP here; all of the performers shine equally, making them one of the best threesomes you'll ever watch outside of your computer.

House of Tards plays through April 9 at the Stonewall Inn.