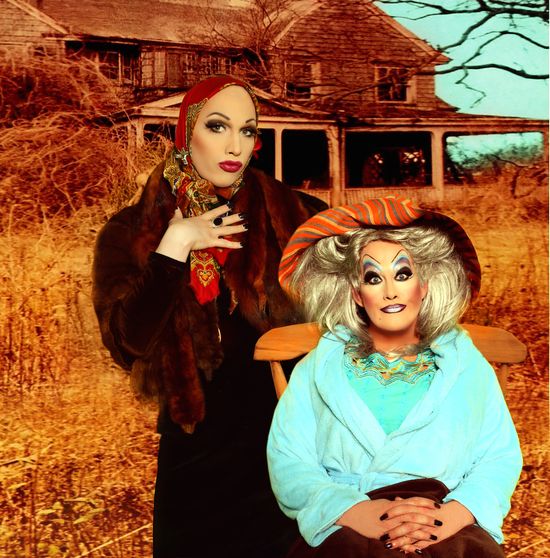 Here's your chance to win a pair of tickets to the show!

Just comment this post with your favorite drag performer of all time. A week from tonight at 5PM ET, I'll pick 1 of you at random to win. Good luck! (Tickets only, no transportation provided.)

More info on the show here:

Set forty years into the future, RETURN TO GRAY GARDENS documents the lives of an aging drag mother (Big Peachy) and her bitter drag daughter  (Lil' Jinkxy) who continue to perform for an empty house at the now dilapidated and run-down Mason Hall in New York City. How did this happen? What will become of them? And will their famous and successful royal drag cousin step up and help out?

JINKX MONSOON is the alter ego of Jerick Hoffer, who graduated with a degree in theatrical performance from Cornish College in Seattle. With ten years experience on stage, Hoffer is a seasoned Portland-born entertainer who has captured the attention of his native northwest region. As early as 2006, Hoffer appeared as the lead dancer in the world's largest drag queen chorus line, which made the Guinness Book of World Records. By 2012, he had advanced to roles in Seattle theaters, playing Moritz in "Spring Awakening" (produced by Balagan Theatre), Angel in "Rent" (produced by The 5th Avenue Theatre), and Hedwig in "Hedwig and the Angry Inch" (produced by Balagan Theatre and Seattle Theatre Group). In 2014, he was nominated for the Helpmann Award (alongside the likes of Cate Blanchett, Ivo Van Hove, Denis O'Hare and Baz Luhrmann), the Australian equivalent of a Tony, for his performanace in The Vaudevillians.

JOSHUA GRANNELL, the “altar” ego of PEACHES CHRIST, is a San Francisco-based filmmaker and entertainer who made his feature film directorial debut with the dark, horror comedy “All About Evil,” starring Natasha Lyonne, Thomas Dekkar (Bakstrom), Cassandra "Elvira" Peterson and Mink Stole.  He spearheaded the All About Evil: The Peaches Christ Experience in 4-D, a multimedia film/music event that toured the world featuring actors from the film and has created the immensely popular Midnight Mass movie series, an interactive celebration featuring a film tribute and live interview with a multitude of talent including John Waters, Elvira, Jennifer Tilly, Pam Grier and more. Grannell is currently developing, producing and distributing feature film projects, exclusive online content and ‘live’ events, for crazed fans, around the world. For additional information, visit www.PeachesChrist.com

MINK STOLE is a household name for anyone familiar with the films of John Waters – she has appeared in every one of his features, and almost all of his movies. She began her film career in Waters’ 1966 short Roman Candles, but her appearances in films including Pink Flamingos, Female Trouble, Cry-Baby, Serial Mom and Hairspray have undeniably made her an underground legend. In 2013, she starred Off-Broadway in an acclaimed revival of Tennessee Williams’ The Mutilated opposite Penny Arcade. She is the lead singer of Mink Stole and Her Wonderful Band and released her first CD in 2011.  Mink also co-starred with Natasha Lyonne in Joshua Grannell’s comedy horror film All About Evil. Follow her at www.minkstole.com.