Barely made it to the second sold-out show of Return to Gray Gardens, the one-night-only presentation by Peaches Christ (fresh, arguably, from San Francisco) that spoofed the classique Grey Gardens (1975).

Christ came through with a stellar case, including Thomas Dekker (Heroes, All About Evil), Mink Stole of John Waters infamy and NYC's own Bob the Drag Queen, attempting Onassis realness. Two hunks were on hand to play the Maysles Brothers, who directed the original. (One was doing double-duty as choreographer, werk.) 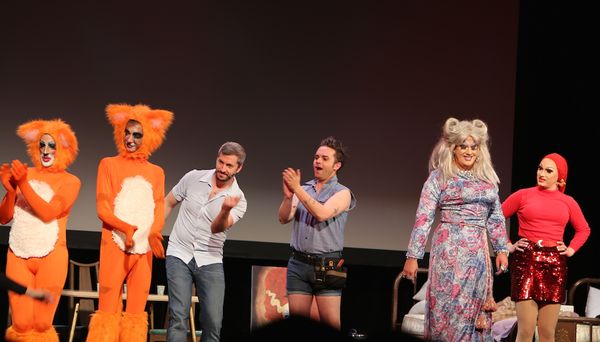 Lots of pussy on that stage.

Jinkx Monsoon, as Little Edie from the film, was the obvious highlight, but you know that if you saw her Snatch Game appearance on RuPaul's Drag Race, which the bitch won in a walk.

The next time you get a chance to see Jinkx in NYC is in The Vaudevillians: Bringing Up Baby May 21—24, 2015, at the Laurie Beechman. The first one was BRILLIANT.