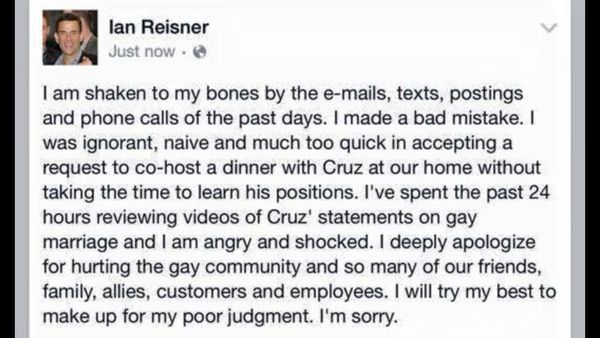 Well, it feels like it took a million years, though in reality it was only a few days, but Ian Reisner, who cohosted a dinner at his home for the virulently anti-gay Ted Cruz has now issued a statement on Facebook in which he claims he was unaware of Cruz's statements and in which he says—for the first time—he made “a mistake” and is “sorry.”

I guess his hiring of R. Couri Hay was money well spent, though one wonders why he couldn't have seen immediately that the best thing to do was to apologize and repudiate Cruz. It amazes me that any intelligent, successful, politically aware gay man had to resort to YouTube to know Cruz's positions, but there you have it.

At the same time, the operator of Fire Island Ventures, P.J. McAteer, posted: 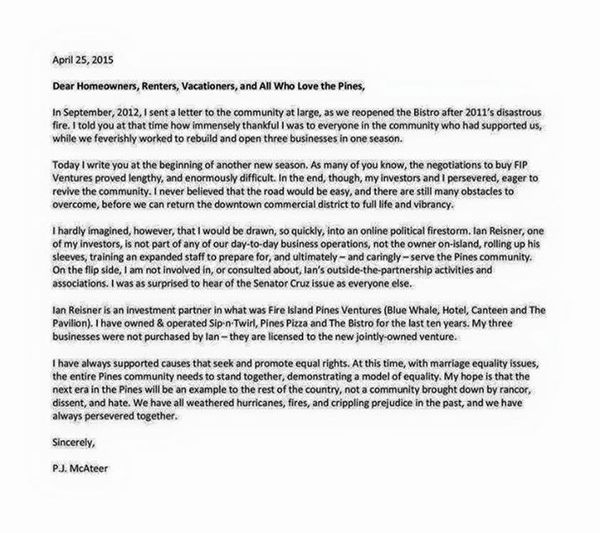 I am sympathetic toward Mr. McAteer, who couldn't have known what was in store when he partnered with Reisner, and is probably in no position to expunge Reisner from his business. However, his statement is pretty wishy-washy; it contained no repudiation of what Reisner did, it simply expresses surprise. But still, he isn't the villain, and I'm sure his statement will be what gay men cling to when they dash off to The Pines this summer.

Maybe I'll have to read fewer clueless comments from Reisner's twink supporters online now, claiming it's totes okay to meet with an anti-gay monster because Democracy.

Do you think this ends the matter, or is it not enough? Where's Weiderpass in all of this? Oh, digging in. He says to boycott him all we want, and says anyone doing so is harming the cause because—wait for it—a right-leaning publication is stating that gay boycotters are less tolerant than anti-gay politicians:

That statement is unFUCKINGbelievable. What the R. Couri Hay??? (I assume that since it's from April 24, Mr. Hay or someone will try to talk sense into Weiderpass, who will at some point pretend to be sorry to make it all go away.)