Tonight, three years (I can't believe it!) after my run-in with President Obama, I was able to attend a reception for future President Hillary Clinton at Jay Z's 40/40 Club on W. 25th St. here in Manhattan. 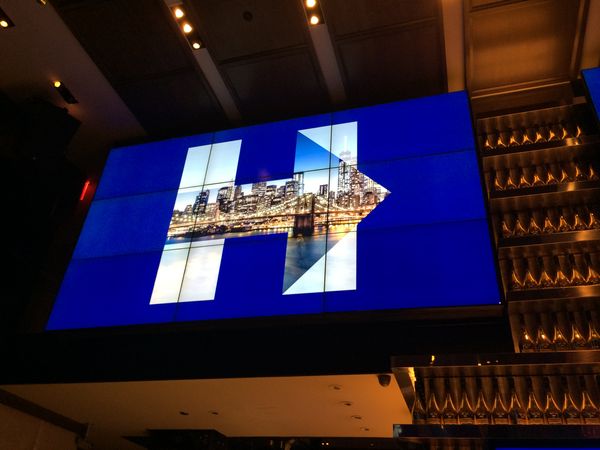 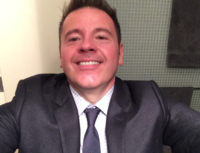 Entering, we had to pass a couple of anti-Hillary loons in Pinocchio noses murmuring about Benghazi. Oddly, they didn't really dampen anyone's enthusiasm. The woman is imperfect, but her desire to change the country for the better and her intellect are formidable.

It was an intimate gathering, no more than about 60 supporters, I would guess, a decidedly youthful and racially diverse lot. I spent most of my time chatting with a sexy guy whose company is already helping the campaign take advantage of digital outreach, and a guy who apparently invented an app that scans any object at all and provides you with info about it. He was telling me that the legendary photographer Albert Watson has promised him 7,000 outtakes of his famous shots of the late Steve Jobs. With the glam Uzo Aduba

We mostly joked about our nerves over the photo op, but it was low-key. We all filed down a hallway and into an open space where Hillary was posed in front of her logo on a screen. She looked gorgeous in what I had though was burgundy, but looks more magenta in the photos. She really is attractive in person, and taller than I thought she might be. Huge smile. 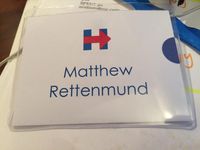 Emmy magnet Uzo Aduba went a few people before me, and I glimpsed Katie Holmes seated in a green room.

When it was my turn, Hillary shook my hand and laughed heartily at my line: “The only title I want you to have more than president is queen.” I think she was open to  the idea. She positioned me for the photo, which I'm afraid is going to be disastrous because it was shot with me closer to the camera (Bighead strikes again!) and sort of twisted toward the photographer, so I'm guessing I will look fat. Also, I wasn't wild about my hair.

But it was (where are you, Jody Watley?) still a thrill. Before I took my leave, I told her she has my full support, for which she thanked me, and then I shamelessly asked for an autograph, which she indulged. She wanted to know when I got into collecting autographs, and I told her I get into it only when in front of interesting people.

As I left, I congratulated Dascha Polanco and Aduba on Orange Is the New Black. I brazenly got a quick, dark selfie with Aduba, who graciously obliged even though nobody else was doing it. 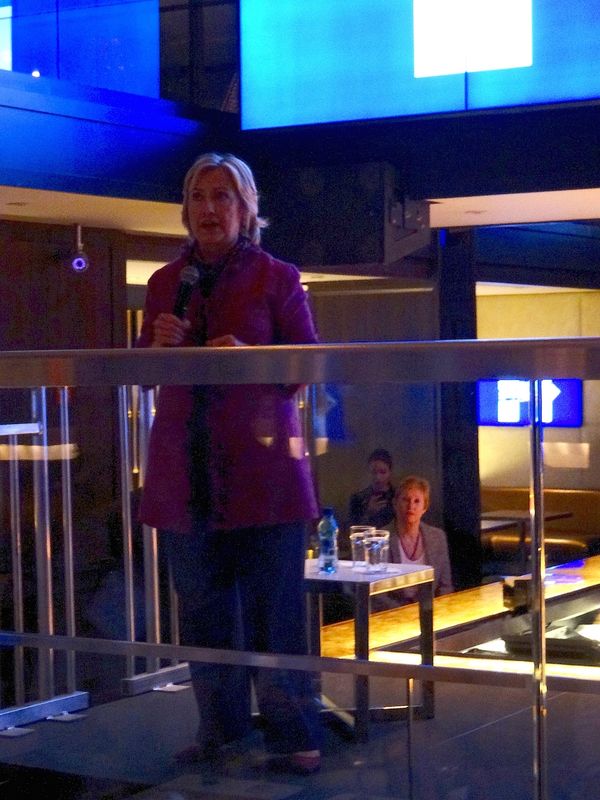 She has a sort of left-wing Shirley Jones thing, I think.

I was then instructed to sit in a glassed-in area before a low-stage. It was a terrible set-up for Hillary's 20-minute talk because every level had a tall, glass barrier nearly at eye level (when seated), and they didn't turn on any lights. The first hostess reminded us not to shoot any video, so I felt the awkward set-up was being embraced as a deterrent. Nobody wants to be in a money-rich fan setting and accidentally get videoed saying the wrong thing. It happens!

They didn't say anything about no photography, so I did my best in the dungeon; even flash wasn't discouraged, so I was able to flash away.

Katie Holmes (who gave me a darling, coquettish look when she noticed me stealing some photos) gave Hillary a quick intro, then HRC spoke eloquently about her vision for the country. It was a stump speech, but she is impressively sincere—a total wonkette.

Hillary made the point that the country does better with Democratic presidents, underscoring that the last two Democratic presidents have inherited devastating economies from their Republican predecessors. Interestingly, she stressed that the election is about deciding whether to go into the future, or returning to the past. Even though she is an establishment candidate (and often criticized as being of the past), she does not want to be a status quo or, God forbid, a reactionary candidate—she has a vision for the future.

“If being for equal pay for equal work is playing the gender card, then deal me in.”—Hillary Clinton, September 30, 2015

She pledged to fight Citizens United, to stand up for equal pay for equal work, to take climate change seriously, to address incarceration reform, to invest in renewable energy, to celebrate diversity, to take on infrastructure repairs—in short, a progressive's dream.

The most topical moment was when she addressed the abysmal treatment of Planned Parenthood's Cecile Richards before Congress just yesterday, saying [please credit BoyCulture.com for any quoting]:

“I thought the way the Republicans treated Cecile Richards was so terrible; they were bullying, they were demeaning, they are contemptuous of the important work that Planned Parenthood does ... It was just a continuation of their insensitivity ... to women and women's health needs. I hope that we send them a very strong message in this upcoming election.”

At the end of her speech, she greeted some late arrivals at the side then tore off to her next obligation.

It was dazzling. I hope she becomes our next president. Twice.