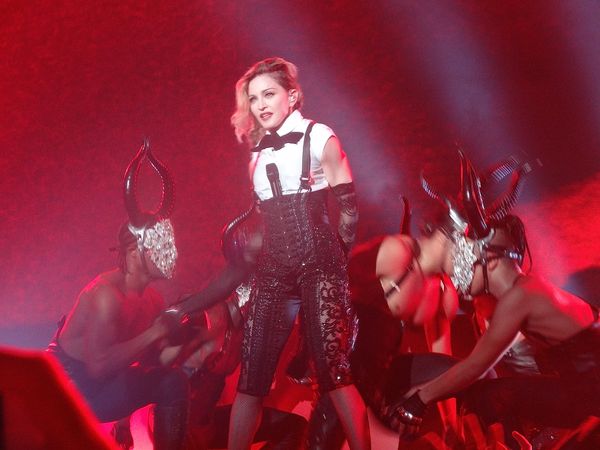 I could understand it if someone said they didn't love Madonna's MDNA Tour. I would be shocked if anyone professing to like Madonna would say to me they didn't love her new Rebel Heart Tour, which kicked off in Montreal tonight—the unpretentious tour trades in art and angst for pop transcendence.

The set list is a longtime fan's dream, hitting her first and second albums harder than ever previously thought possible at this late date, and the costumes and set pieces are glitzy and escapist.

Madonna can command a stage regardless of her agenda, whether via stylized violence, sustained pauses, or—as here—pure charm. With Rebel Heart, she kills with kindness, captivates with mega-watts smiles. She has proved to the world that at 57 she's still sexy and sexual, but on stage, she is shockingly unshocking, covered from head to toe most of the time.

Also shockingly unshocking is the show's content Sure, there are nuns on stripper poles and a gasp-inducing Last Supper mise-en-scene. Nonetheless, Madonna's presentation of such things carries no sense of menace. She sings that she just wants to have fun tonight, and wasn't lying.

Madonna generously offers up some of her most fondly remembered hits, and manages to perform a large chunk of Rebel Heart without making it feel like she's forcing new stuff down old fans' throats. I was pleasantly surprised at how much I really enjoyed “Body Shop” and “HeartBreakCity,” two new songs I had assumed I would be able to live without.

Indeed, a highlight has to be an artfully choreographed stair-down on the latter, which segues into an exciting and beautifully sung “Love Don't Live Here Anymore.”

A hits medley had fans questioning their ears (yes, she really just launched into that song!), but what blew the crowd away was Madonna's exquisitely delivered “La Vie en Rose”; she earned a well-deserved standing O from the French Canadians.

When Madonna whipped out her guitar or her ukulele, she didn't damage how her classics sounded; indeed, many of her old hits sounded very close to their original renditions, with some intelligent tweaking here and there.

I'll have more on the tour when I'm not traveling, but I would summarize it as a thrillingly carefree, warmly nostalgic tribute to Madonna's roots (which are dark!) and to her fans.

Bitch, she's Madonna ... but she acknowledged tonight that she does not always have to be a bitch about it.