Why Are Gay Guys Obsessed With Storytelling?: Darryl Stephens On His New Book REQUIRED READING Comments (0)

Darryl Stephens, one of the actors who starred in the film version of Boy Culture (2006), and who is known to many for his titular role in the series Noah's Arc (2005-2006), and/or from the series DTLA (2012), contributes this essay on the occasion of the publication of his first book, Required Reading.

As always, he expresses himself with conviction and intelligence. I'm honored to include his work on the site.—Matt 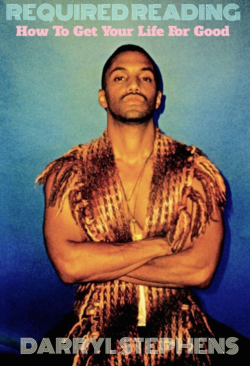 I recently wrote and published a book called Required Reading: How to Get Your Life for Good. It’s part memoir, part motivational, and intended for anyone who might be interested in discovering how I’ve managed to make it to 41 years old as an unapologetic, openly gay black man.

Since Noah’s Arc first aired ten years ago, I’ve been hearing from people from all over the world, asking my advice on dating/relationships, or coming out to their families/friends, or navigating their careers as openly LGBT artists. The visibility that series provided me really opened my eyes to how many people are really struggling with these issues.

Initially, my book was going to be more “Dear Abby” in tone, as I’d planned to include people’s real questions on topics affecting the LGBT community and then share my advice as tidy, politically correct, inspiring responses. But as I was writing, I realized that without the context of how I came to reach these various understandings, readers would have no reason to consider my opinion worthy of their consideration. Personalizing the lessons by rooting them in my own experiences, be they “failures” or “successes,” seemed to make my conclusions more relatable. Making it personal also allowed for the tone to be more conversational, which meant that I could be honest about the things I’m still struggling with, rather than throwing advice down from the proverbial mountain top.

Writing the book in the way that I did allowed me to pose questions that I think we need to consider, instead of pretending to have all the answers.

People my age really didn’t have many visible gay role models, largely due to HIV/AIDS wiping out the generation before us. I’ve always wondered if gay men would be more adept at navigating our lives and relationships if we’d had more gay elders to look up to and emulate. Then, I realized, as a middle-aged man, I am a gay elder, and it’s now my responsibility to impart what I’ve learned upon the next generation.

Three of the many faces of Darryl Stephens

Required Reading is me encouraging young people to take advantage of all the recent progress the LGBT movement has made by choosing to lead more honest and authentic lives. Black gay men in particular are at a crossroads right now. The Black Lives Matter movement is gaining national attention, but so many of those conversations seem aimed around the preservation of cisgender, heterosexual black men. It’s crucial right now for us to integrate our black lives with our gay lives so that our communities recognize that our lives—our black, queer lives—matter, too.

A few weeks ago, I did an interview with a writer I genuinely like and respect for a major Web site.  Before we’d even sat down to chat, he admitted to me that his editor was having a hard time framing the story about the release of my book in a way that would be relevant to their readers. I didn’t have any time-sensitive appearances scheduled, so there was a chance that once it was submitted to the editor, the article might be in limbo for a couple of weeks.

Then, that black gay man killed those journalists. The following day, the piece on my book was published with a quote from me as the headline: “Being Black and Gay in America Both Come with Heavy Doses of Self-Loathing.” As I expected, based on the interview, the piece was thoughtful and totally in line with the book’s themes. What I did not expect was all the Twitter trolls comparing me to the killer, or assuming that I was offering some justification for his actions. To this day, I haven’t followed that story, so I obviously wasn’t justifying anything. But just like the media likes to assume that all black men are thugs based on the actions of a few individuals, these people decided to dismiss my black gay perspective as psychologically unstable because the only other black gay man that had been in the news that week happened to have killed some white folks. 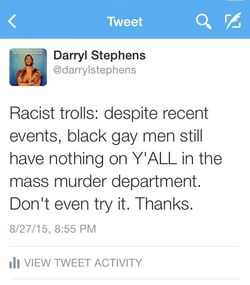 A few “twits” simply quoted the headline with my Twitter handle and added, “Not my problem!” or “So go see a shrink.” I kept thinking, if the themes of the article didn't apply to them, why bother tweeting the guy the article is talking about? But they seemed genuinely angry that I was being honest about my experience. They were somehow threatened by a site they respected validating my truth.

It really confirmed for me how important it is for us to be visible and tell our own stories. The fact that some people so desperately don’t want to hear them just proves that we need to keep speaking up.

Most of the quotes people are pulling from the various interviews I’ve done seem to frame my perspective as that of a “black gay man struggling.” While I do try to illuminate the obstacles to our collective empowerment, I don’t see the book as “woe is me” at all. Most of what I’m discussing is rooted in empathy and gratitude, not strife. I want my book to inspire readers to live honestly and without shame.

I am well aware that my story of unconditional familial support and flattering film roles might be considered an anomaly in the black gay world. I know that many of us are struggling to be accepted by our churches and our families. Many of us still have a lot to overcome—I see that. But Required Reading is really about finding ways to support one another in that process. I’m hoping to provide an alternative perspective to the suffering that being black and gay in America presumably entails ... but it’s definitely a process. I’m learning, too.

Sharing our experiences and perspectives is how we build coalitions. We validate our lives by affirming our truths with no apology. We can’t hide in the shadows anymore. We have to claim our place in our own communities and start talking about our role in this country’s complicated history.

And we have to do it now.

Required Reading by Darryl Stephens is available now at Amazon.com.