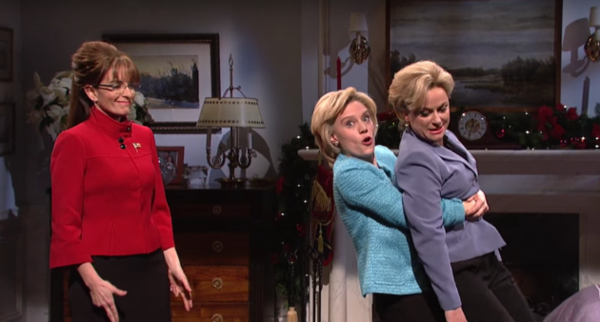 Tina Fey and Amy Poehler returned to SNL last night, bringing with them their most famous political impressions—Sarah Palin and Hillary Clinton. This led to an A Christmas Carol-esque situation, with Hillary 2008 (Poehler) advising Hillary 2015 (Kate McKinnon), with Palin playing the role of spoiler.

Here is the sketch.

And this is the impressive pep talk Palin had for the Hillarys:

Now here's my advice: Ya gotta do what ya believe in your spirit, but also: America. But not teachers and their fat, liberal books, but also. And even, why worry about fast-food wages with their status quo, which is another Latin word — 'status quo.' Meanwhile, Americans are bein' taken for a ride, and also, the man can only ride you when your back is bent, so ...

The real Palin may want to consider hiring Fey as her speechwriter; it's nonsense, but it's still better than her usual fare.