Pea Shy: A Review Of ONCE UPON A MATTRESS Comments (0) I feel like I need a passport whenever I head east—way east—to the Abrons Arts Center (466 Grand, NYC), but it's worth the trip when Jackie Hoffman and John “Lypsinka” Epperson are teaming up in a revival of the musical comedy Once Upon a Mattress, directed by Jack Cummings III.

In spite of being staged Off-Off-Broadway, every aspect of the production is on-point, from the committed performances by top-notch talents to the staging by Scott Rink and even whimsical drawings happening live via projection behind the action courtesy of illustrator Ken Fallin.

The piece itself is shticky, the kind of work that can be pulled off only if all involved are embracing the humor; all are, making this Once Upon a Mattress an absolute charmer. 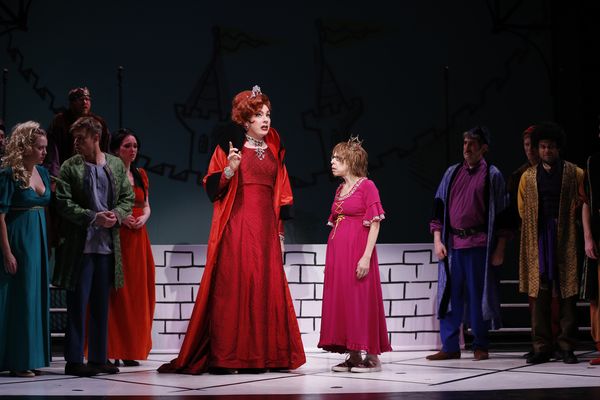 Epperson, the woman in red: This particular queen will drag a bitch.

The show is based on the old story of The Princess and the Pea, in which the overbearing Queen Aggravain (Epperson) attempts to keep her son, Prince Dauntless (Jason Sweet Tooth Williams), from being married off by making each potential princess endure ridiculously impossible tests. Worse, no one else in the kingdom can get married until Dauntless does, leading to a lot of frustration in what seems to be a regular Club Med-ieval. When Lady Larken (sweet-voiced Jessica Fontana) announces to her lover Sir Harry (dashing and quite appropriately hair Zak Resnick) that she's preggers, he sets off to find a suitable princess for Dauntless so the couple can get married before they become parents. 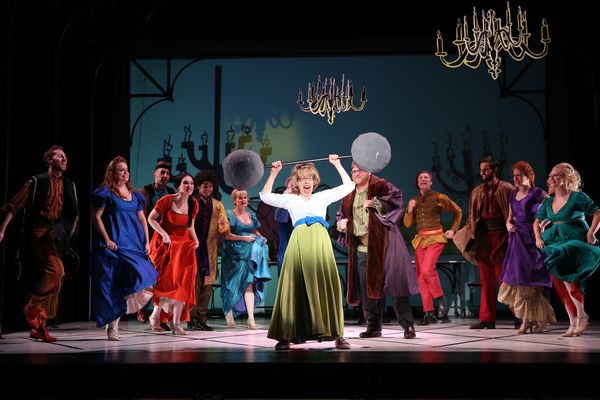 Hoffman could carry this show if she had to; she doesn't have to.

Enter Princess Winnifred in the form of the sublime Jackie Hoffman.

Hoffman doesn't approach her part as a camp, instead imbuing it with genuine heart, inspired comic timing and her amazingly supple voice, which careens without warning from impressively operatic to expressively hammy. She elevates every task she's given in the show, and the modern asides she's given (or possibly that she created) always find their mark.

Of course, we all know that Winnifred will pass the queen's test and all will end well, but it's never not fun watching and listening to that happen. (For a two hour, 20-minute show, it's remarkably engaging.)

Epperson is a treat, bringing to the queen his unique set of woman-nerisms from his character; it's a riot watching him give line readings in his own voice that would normally be lip-synched samples from obscure movies. The queen's a total gasbag, which Epperson underscores with every affected syllable out of her mouth and every twisted expression of malevolent grandeur. 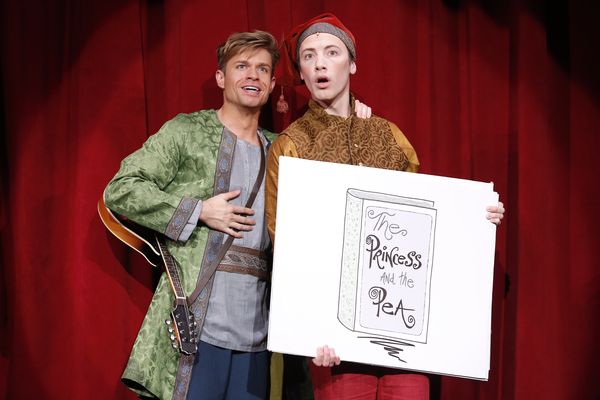 You'll also love comedic fave Jay Rogers as The Wizard and the gifted David Greenspan as the mostly mute King Sextimus. More of The Minstrel's (Hunter Ryan Herdlicka) lovely voice would have been one of few welcome changes in a show that's exactly what it should be.

Special praise is reserved for Cory Lingner, adorable as The Jester, physically dazzling in his big dance scene and a never-ending supply of charisma.

Get tickets for Once Upon a Mattress through January 3 here.