President Obama won't back any candidates who are not serious about gun control, he writes in The New York Times.

He also went on the offensive in a unique town hall-style setting with Anderson Cooper, during which he effectively 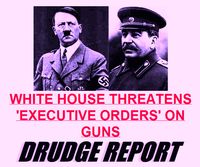 dealt with criticism from people like the (in)famous American Sniper's wife and a woman who was raped and who worries that Obama wants to take away our Second Amendment rights.

To the latter, Obama said:

Your story is horrific. The strength you've shown in telling your story and, you know, being here tonight is remarkable...really proud of you for that. I just want to repeat that there's nothing that we've proposed that would make it harder for you to purchase a firearm.

Meanwhile, Ted Cruz and others continue to play into right-wing conspiracy theories that the president will somehow unilaterally do away with gun rights and successfully have all guns removed from Americans' hands. I'm sure he will have no problem persuading the military and local police forces to assist him in this, the final year of his presidency.