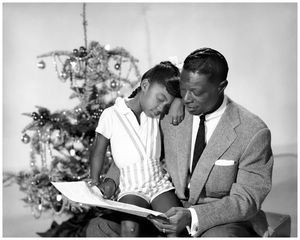 Natalie Cole, a unique vocalist who first carved out her own niche in the music industry that was distinct from her dad's—the legendary Nat King Cole—and who later performed a famous virtual duet with him, has died at 65.

Cole had been battling hepatitis C and was the recipient of a kidney transplant, health conditions from her years as an addict. She had successfully kicked her addictions years ago, and was upfront about her struggle, which ended with rehab in the '80s. The official cause of death appears to be congestive heart failure.Along with her signature song, the aforementioned duet “Unforgettable”—which shockingly only went to #14 in 1991 and became her final Top 40 entry —Cole's singles included the Top 10 hits “This Will Be” (1975), “I've Got Love on My Mind“ (1977), “Our Love” (1977) and the comeback tunes “Pink Cadillac” (1988) and “Miss You Like Crazy” (1989). She released 21 albums and collected nine Grammys, one as recently as 2009.

Nat King Cole (pictured with his daughter, inset), one of the great American voices, died of lung cancer at 45 in 1965.