BROADWAY BACKWARDS Is Here, Is Queer, Get Tickets For It! Comments (0)

The cast of this year's Broadway Backwards has been announced. The show features same-sex versions 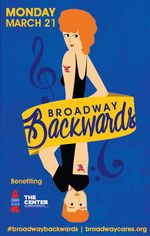 of Broadway classics, performed one night only to raise money for HIV/AIDS.

I went a couple of years ago and had the pleasure of hearing Patricia Morison, age 99, sing one last time (unless she rotates into Chicago unexpectedly!) on a Broadway stage.