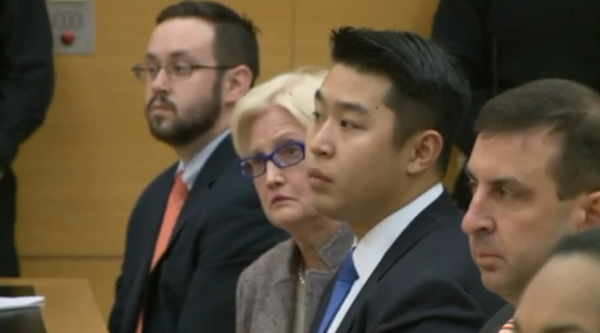 Liang prepares to hear the verdict. (Video still via HuffingtonPost)

Rookie cop Peter Liang was convicted of manslaughter in the 2014 shooting death of Akai Gurley in a dark stairwell.

Liang said he drew his pistol as he and his partner patrolled the darkened 8th floor stairwell of the Louis H. Pink Houses in Brooklyn. He said he flinched when he was startled by a noise, which he said caused the gun to fire.

Liang tearfully recounted the shooting in court, claiming his finger was never on the trigger.

“I was panicking. I was in shock, in disbelief that someone was actually hit,” he told jurors.

Neither Liang nor his partner came to Gurley's aid, claiming they felt improperly trained to do so. SHOCKER: Patrick J. Lynch, head of the NYPD union, decried the verdict. He thinks police never do wrong. Ever.