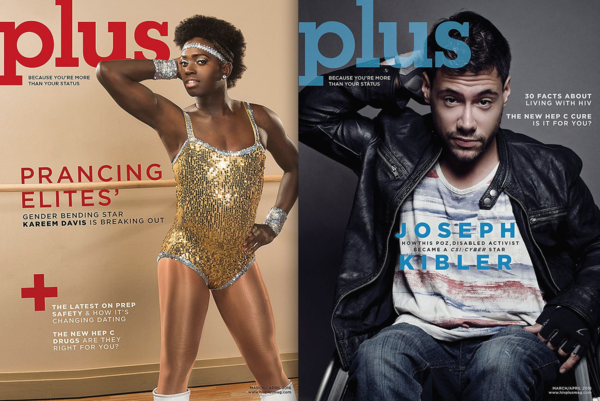 Covers via Plus Magazine

The Prancing Elites star Kareem Davis—diagnosed as HIV positive at age 23—is on one of the March/April 2016 covers of Plus Magazine. In the feature, Kareem says this of coming out on the show:

At first I thought I would face more judgment, but I have actually had people show more respect than anything. People are definitely more excited when they see me [because] I’m an individual that shared such a profound story and I am still doing this whole jazz of the Prancing Elites while maintaining my health at the same time… I’m grateful that it went in a positive direction.

Joseph Kibler, an activist-turned-actor (Re-Casting Kyle, CSI: Cyber) who was born HIV positive, has the other cover. He says being marginalized (both as a person with disabilities and as a person with HIV) has made him a better person:

Whether or not we want to admit it, being marginalized, placed in a box where we are told what we can and can’t do, is actually the best thing that could ever happen to us. We are constantly being challenged. We have to push back and fight for every little thing we have. Every inch of success feels like yards. So if you don’t know what it’s like to be discriminated against, talked down to, been told no, then you’re missing out on the most rewarding experience of proving every single one of them wrong.

Check out the issue now.