From the notes on Film Forum's An Evening with James Sheldon: TV Pioneer (held Monday, March 27, 2005):

James Sheldon may not be a household name, but it’s one that’s flashed across

your TV screen thousands of times.

Coming from radio to the new medium in 1948, Sheldon directed CBS’s first sponsored television series (We, the
People), the beginning of a 40-year directing career that took him from pioneering live shows like Studio One and Mr. Peepers, to just about every hit series you ever watched, including The Twilight Zone, Alfred Hitchcock Presents, Gunsmoke, Perry Mason, My Three Sons, The Fugitive, Route 66, The Naked City (filmed on location in NYC), Batman, and The Man From U.N.C.L.E., right up through Knot’s Landing, Dukes of Hazzard, and M*A*S*H.

Tonight, accompanied by some evocative slides and clips, Sheldon will take us on a history of TV through his career, talking about some of the 1,000+ shows he directed and the many stars he worked with, including Bing Crosby, Tony Randall, Rock Hudson, Gloria Swanson, Barbara Stanwyck, and Boris Karloff—and Dustin Hoffman, Gene Hackman, Clint Eastwood, and James Dean at the very beginning of their careers

The veteran TV director, who died at 95 on March 12, got his start as a page at NBC during the days of radio. Working his way up through the ranks, he at one point found out a directorial gig was opening and went to RKO secretary Norma Anderson to find out how he could be considered. She told him she had a stack of other men vying for attention, but that one way for him to rise to the top of her pile was to go home with her that night. He did, and he was hired. (Anderson later became Mrs. Burt Lancaster, proving she had a shrewd eye for both talent and talent.)

Click here for some fascinating interview footage of Sheldon.

The first radio show Sheldon directed was an installment of the wildly popular We, the People, on April 20, 1948. It went well, and the timing was fortuitous; when the series was launched on TV on June 1 of that year—just six weeks later—Sheldon had been chosen to helm it. He was, in this way, able to step into an established brand and bask in its success on TV, all the while bringing to the show his own artistry, such as filming flashy interstitials using actors and using theatrical props.

Though content was largely driven by sponsors in that era, Sheldon, by virtue of the fact that the show he directed was made up of interviews and stories about real people, found himself handling anything but stale, commercial content. He worked with such luminaries as composer Richard Rogers, Harold Russell (the Oscar winner who'd lost his hands in WWII), boxer Jack Dempsey, baseball great Mickey Mantle, blues legend Billie Holiday (he told me she was much better in rehearsal and was a pain to work with), opera singer Ezio Pinza and actors like Mary Martin, Gloria Swanson, Glenn Ford and Charles Boyer.

Boris Karloff made his first-ever TV appearance under Sheldon's wing, and sent him an effusive note of praise upon its successful completion.

It was during this period that Sheldon directed James Dean in two early live dramas for television: the Robert Montgomery Presents episode “Harvest” (January 30, 1950), in which Dean played the last of three sons of an old farming couple (Dorothy Gish and Ed Begley); and the Armstrong Circle Theater presentation “The Bells of Cockaigne” (June 6, 1950), in which Dean played a desperate young dad gambling to save his family. Kinescopes of these telefilms exist, and are definitely among the most important of Sheldon's contributions to Hollywood history, thanks to his eye for talent regarding Dean.

In fact, his friendship (never a romance) with Dean was such that the men were together in the days 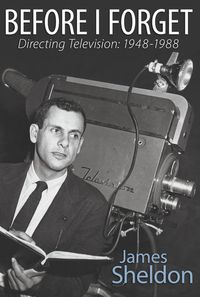 prior to Dean's tragic death. Sheldon wrote in his memoir, Before I Forget: Directing Television: 1948—1988 (Bear Manor Media):

Two weeks before he was killed, we went to a rehearsal at NBC in Burbank of a live television adaptation of Our Town, which was starring Frank Sinatra, Eva Marie Saint and Paul Newman with songs by Jimmy McHugh. This type of special was a once-a-month show that Fred Coe produced. The next month, Jimmy was to star in an adaptation of Ernest Hemingway's The Battler. Jimmy wanted to see the studio set up and we enjoyed sitting through the Our Town dress rehearsal. Jimmy died before he could do his episode.

Dean's part went to Newman, whose career escalated because of it.

In his memoir, Sheldon described in detail how he got James Dean a job:

I received a call from my friend, director Ralph Levy, the original camera director on We, the People, who was now at CBS in Los Angeles. Levy had a friend of a friend, a young actor, coming to New York, and would I help him get started? A few days later, a handsome twenty-one-year-old named James Dean showed up in my office.

I happened to have on my desk some copies of an audition scene from the comedy-drama series Mama. The producer, Ralph Nelson, needed a replacement for the juvenile lead, Dick Van Patten, who was being drafted into the army. I gave Jimmy a copy of the scene to read for me. He did a good reading, good enough for me to call Mama's casting director, Doris quinine, and recommend that she meet him. I told her that Dean reminded me of a young Brando ... Jimmy read for them and got the part. I was a hero to everyone ...

Sheldon, in a remarkable series of interviews for the DGA, spoke of telling Rock Hudson of his friendship with Dean while Sheldon was directing McMillan & Wife (four episodes, 1974—1977). When he brought up Dean's name, Hudson reportedly said, “That prick!” This led to the men screening Giant (1956) at Hudson's home, after which Sheldon convinced Hudson that Dean had probably tormented Hudson as an extension of his character in their film.

James Dean in “Harvest” (L) and “The Bells of Cockaigne” (R)

Sheldon's first direction of a popular series that has survived, to some extent, in the public's imagination was Mister Peepers (1952). He enjoyed a tight bond with star Wally Cox, knew Cox's best friend Marlon Brando well and was instrumental in the launching of neighbor Tony Randall's career via the series.

Though Sheldon's work with Dean is important historically, probably his best-remembered TV work will wind up being his six episodes of The Twilight Zone (1961—1962). I just watched one of them, one of my favorites, the other evening: “I Sing the Body Electric” (1962), in which a gaggle of kids who've lost their mother are gifted with a nanning robot (Josephine Hutchinson) by their doting dad (David White, Larry Tate of Bewitched). It's a wonderful episode, one of my favorite types of Twilight Zones—spooky, but with heart.

His other episodes of The Twilight Zone were also humdingers: “The Whole Truth” (1961), in which used-car salesman Jack Carson is doomed to tell the truth by a magic car; “A Penny for Your Thoughts” (1961), in which Dick York can hear others' thoughts; the devastating “Long-Distance Call” (1961), starring priceless Billy Mumy as a kid who speaks on his toy phone with his beyond-possessive, beyond-the-grave granny (Lili Darvas); the equally gut-wrenching “It's a Good Life” (1961), starring Mumy again, this time as a malevolent kid with the ability to control everything, including the destinies of his terrified parents (Cloris Leachman and John Larch); and “Still Valley” (1961), about a Confederate sergeant (Gary Merrill) who could win the Civil War for the South with some help from a warlock (Vaughn Taylor).

Sheldon longed to direct features, but never did. He thought of his dramas for TV as films, but the one time he was invited to direct a feature—by Anthony Perkins, who wanted to star in the film version of the play Fear Strikes Out (1957)—Sheldon declined, feeling he wasn't ready for movies. The man who said yes, Robert Mulligan, was as inexperienced in film as Sheldon, but said yes. Mulligan went on to direct 20 features, including To Kill a Mockingbird (1962). It was one of Sheldon's only real regrets.

Sheldon was just as natural-born a storyteller off camera as he was on camera. Hetold me he admired Marlo Thomas for maximizing her talents and for her overall business acumen, crediting her for shaming him into dressing casually in the '60s, when he was still showing up to work in his Eisenhower-era suit and tie.

He complained that he disliked The Love Boat because the cameramen behaved as directors and had more power due to their long-running work on the series and because of the show's scattershot filming schedule, with multiple directors duking it out per episode. The quality was not there in the storylines, either.

Ominously, he told me a story of wanting to use his buddy Eddie Albert on a radio show in the late '40s, and being told no because Albert was blacklisted. He took a train to I believe Boston to speak directly with the guy in charge at the ad agency, believing he could persuade him in person. The usually amiable guy told him no way, because Albert, a commie, couldn't be trusted not to abuse being on live radio by calling on fellow commies to riot. Sheldon found this preposterous, suggesting he have someone on his crew be on hand to pull the plug should it become necessary. The by-then-wild-eyed ad man shot back, “What if he's in on it???” Albert didn't get that job, and Sheldon wouldn't be able to work with him until the blacklist was lifted.

On a lighter note, he said of one of his last jobs, directing two episodes of the camp Partners in Crime (1984) starring Loni Anderson and Lynda Carter, he was once running out of time to shoot because each lady insisted on long makeup sessions. He calmly informed them that while they looked beautiful, there would soon be no time to shoot their closeups. They emerged from their trailers in record time.

A huge success in TV, Sheldon branched out into the world of theater by asking director Harold Clurman if he could shadow him during the preparation of William Inge's 1955 play Bus Stop. Giving up a tidy sum to have been earned directing TV, Sheldon was allowed to work with Clurman on Bus Stop, thus getting a bird's-eye view of one of the most important productions in Broadway history, from its out-of-town run (they replaced leading man Jerome Courtland with eventual lead Albert Salmi) to the Great White Way.

Following his successful career, the bisexual bon vivant, who was previously married and had two sons and a large extended family of whom he was proud and loved dearly, traveled the world, socialized extensively in New York, L.A. (where he'd once lived, throwing storied pool parties), Fort Lauderdale and abroad, remained active in the Director's Guild of America and consumed film voraciously; he was up on most of 2015's Oscar nominees. One of his passions was live theater, a hobby of his that spanned from the 1940s, until the very end of his life, and he counted the most important Broadway shows in history among those he'd attended—often on opening night.

A pioneer of TV and a lover of life, James Sheldon's legacy for those who knew him and his work will be a creative curiosity that enriched every project and every person he touched. 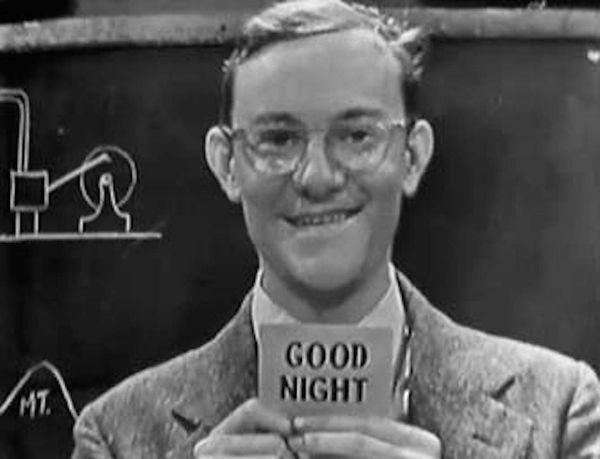