Madonna will bury her critics—hopefully, literally. (GIF by Matthew Rettenmund)

Tabloid journalists have been going the extra mile to try to paint Madonna in the most negative possible light during her Rebel Heart Tour. For a woman they've been calling “irrelevant” for years, it's remarkable that every time Madonna took the stage late, it spawned major international headlines and served as reliable clickbait.

On top of her tardiness, Madonna has been called out for being drunk or even on pills (or both), totally new fronts in the decades-long assault on her integrity as an artist and on her character. Already slurring her as a problem drinker, it wasn't a very big leap for the press to begin using the coded descriptor “bizarre” for Madonna's onstage behavior. Calling her bizarre, coupled with impugning her sobriety, is just a new way to make Madonna seem unworthy of her fame and success and of the support she receives from admirers—and becomes another argument for why the only woman to ever earn a billion dollars touring (helped along by $100+ on her latest tour) needs to retire already.

The latest scandal, hyped up to seem as vile as possible for outraged consumption by people planted in front of their computers: Madonna “humiliatingly” exposed an underage girl live onstage during her final concert in Brisbane, Australia. Except it turns out all that happened was an unintentional wardrobe malfunction (the fan was in a corset with nipple rings attached) that the 17-year-old fan described as “the best moment of my life.” The fan went on to state:

Only I get to decide if I’m humiliated or not—why would people assume I am humiliated by my own breast, nipple or body? I didn’t realize my boob was such a big deal—it was nothing to me.

Making something out of nothing has been the goal of the tabloid press during Madonna's globe-trotting Rebel Heart Tour. In spite of (almost) universally glowing reviews for Madonna's actual performances, she's been pilloried again and again, over and over, demonized as callous, as anti-status quo snobbish (“I'd rather die than work in Vegas,” sniffed the woman who refuses to become an oldies act) and, when that failed to dent her reputation sufficiently, mocked as past it, perhaps even addled.

Madonna hasn't exactly discouraged the narrative. There's no good reason even an elaborate tour such as hers can't get it together to avoid hours-long delays, and she should just apologize rather than making light of it (“It’s you people that get here early that’s the problem. Just come late and I won’t have to come early.”). Once the media circulated stories that she was tipsy, she didn't really need to drink from a flask, even if only a moron would miss the theatricality of what she was doing. Only Madonna could give a totally free show in which she sings many songs she'd never before sung live and have the resulting press focus on her drinking a single Cosmo. 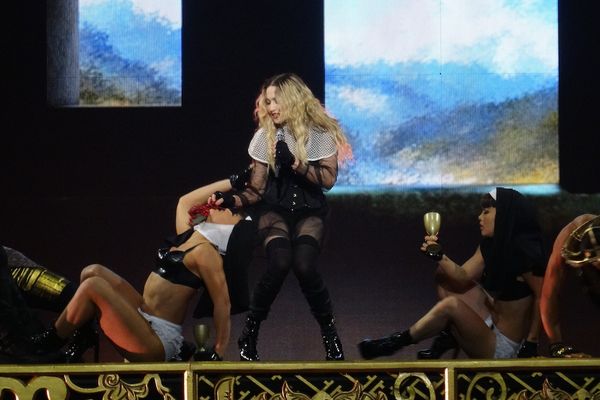 I think Madonna, anything but self-destructive, has always exhibited an element of self-sabotage, which is different.  It's all there in my book, Encyclopedia Madonnica 20, which playfully gathers minutiae about Madonna but which also, in gathering countless quotes and narratives about her from over the years, documents the media's strategy in attempting to take her down and Madonna's reaction to it: Accused of being a whore, she shows her ass all the more. Embroiled in a custody battle that might make some moms scared to do anything offbeat in public, she projects images of her son on a screen behind her and openly pines for his company. Accused of behaving bizarrely, she dresses as a clown. Accused of being drunk, it's perhaps not surprising that she would pretend to be smashed during a brief monologue ... all the while flawlessly executing an exhausting two-hour concert filled with intricate staging and precision dance moves. (Outrageously, more than one outlet recently offered/profited from a video of her “Like a Virgin” choreography, a combination of stagger and swagger, terming it a “stumbling” performance.)

But the press shouldn't be lazy just because Madonna is defiant and does not beg for mercy and make excuses. There should be a conscience there, a desire to get it right even while capitalizing on a performer's notoriety. If Madonna does something newsworthy, good or bad, report it—but don't make it up. And do not, as a senior editor at Entertainment Weekly recently did, go on an entertainment show claiming people are legitimately “concerned” about Madonna's behavior, right before terming it “crazy.”

An objective observer should be able to report that outside of the distressingly late start times in some venues — perhaps to be expected from the girl who, pre-record deal, appeared at Studio 54 at 2 a.m. even though she knew Robert De Niro and other big shots had been waiting all night — Madonna has been a trouper on her Rebel Heart Tour and continues to put on a spectacular show, the likes of which no other performer is currently willing or able to offer. She is historically fit and energized; compare her to other famous women when they were her age and, outside of some Broadway hoofers, you'd be hard-pressed to find any who extended the physical qualities of their acts this long, this successfully. 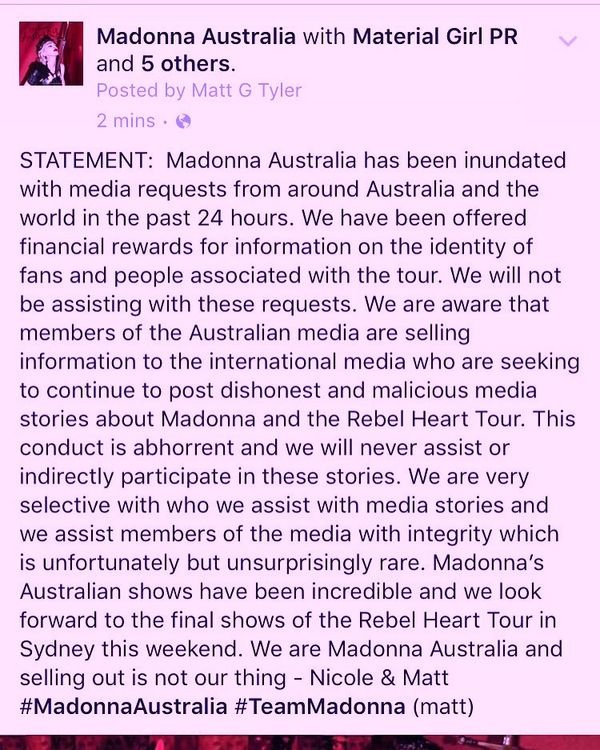 This is why I shouldn't have given an interview to the noxious New York Post. (Image via Madonna Australia)

Sadly, Madonna's wildly entertaining Rebel Heart Tour has only two more shows to go, both of which will be filmed. On the other hand, it can't end soon enough for her the sake of her reputation, which the press has been trying to diminish forever, and which they've certainly dinged this go 'round.

Madonna is not perfect and is not above being criticized, but just because she is not a passive sex object, insists on approaching society's rules with true rebelliousness and is not simply in this for the cash (if she were, her set list would be 100% Top 10 hits), fans should still recognize that she is one singular sensation who should be enjoyed and appreciated until the day she decides it's not worth all the hassle. 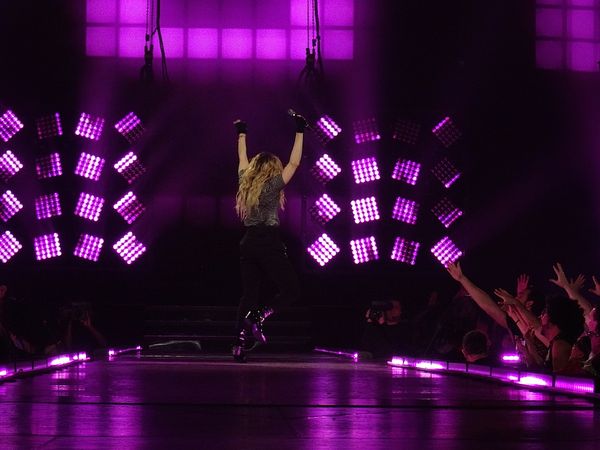