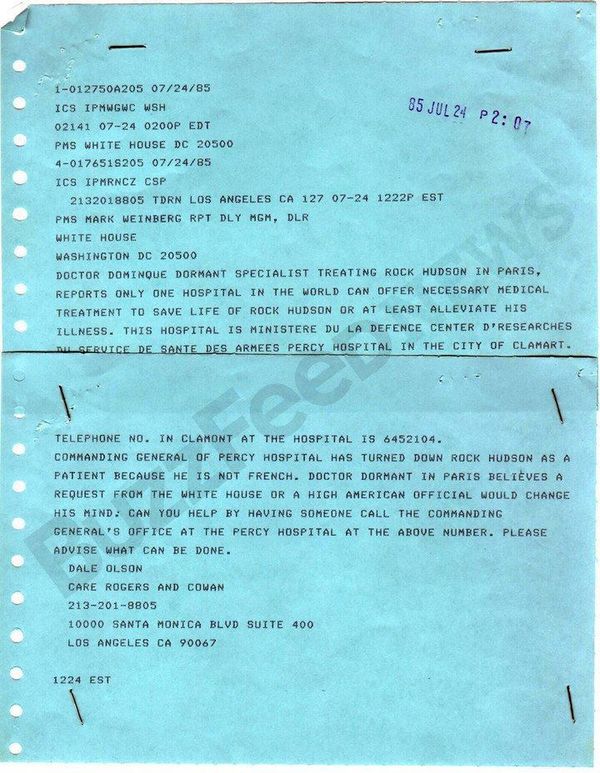 Andrea Mitchell declared on TV today that Nancy Reagan should get credit for helping President Reagan change his mind on AIDS. I can't fathom anyone believing that, or thinking that whenever he did allegedly change his mind it mattered much.

In 1985—all spelled out at Buzzfeed—Nancy Reagan coldly dismissed an opportunity to lend a hand to friend and fellow conservative Rock Hudson, who was desperately seeking admission to a French hospital in order to battle the AIDS that was consuming him. Granted, Hudson was an elite figure, and Reagan's intervention would have been a problematic act of favoritism, but on a human level, the woman didn't want to get involved in a way that would have helped her suffering pal.

Yes, it was early, but 1985 wasn't 1981; had the Reagan White House been more interested in AIDS, it may not have been such a mystery to the general public and to Nancy Reagan years after its discovery.

Just remember this when you're reading about Nancy's elegance and class, two superficial things that often hide quite the opposite.

On a related note, there is a story that has floated around the Internet for years that Bob Hope told an offensive AIDS joke in 1986 at the time of the Statue of Liberty's refurbishing and reintroduction. The story, supplied by noted LGBT scholar (and a great guy I met years ago) Michael Bronski, goes that Hope joked that the Statue had AIDS, and, Nobody knows if she got it from “the mouth of the Hudson or the Staten Island Ferry.”

In Bronski's memory, the Reagans laughed at the joke while the French president and his wife, the Mitterrands, looked horrified.

My first thought about this has always been that it was a pretty raw joke for Hope, and that if this happened—Bronski describes it as being telecast—there should be video footage. It was a huge event. No video exists.

I dug around, and with the assistance of Will Kohler from Back2Stonewall.com, located this link from the time of the event.

This is a letter (published July 30, 1986) to the editor from John H. Bunzel, who'd been appointed to the U.S. Commission on Civil Rights by President Reagan. Bunzel writes:

“One of the delights of Liberty Weekend, as many observers of the national celebration have pointed out, is the knowledge that the Statue of Liberty managed to rise above all attempts at trivialization. Unfortunately, Bob Hope's attempt at humor was the only exception. He shocked an audience with a tasteless and offensive remark about Miss Liberty.

“Hope appeared before 360 guests, who paid $1,000 each for a July Fourth dinner and fireworks cruise aboard the yacht Princess. His so-called "joke" was about Miss Liberty having AIDS. Hope said, "Nobody knows if she got it from the mouth of the Hudson or the Staten Island Ferry." Those who did not groan in embarrassment sat silent in dismay.

“Hope's "joke" was worse than obscene. It was abusive and unworthy. He should not have to be reminded that profanity--and he was profane--is the refuge of insensitivity. It is both sad and shameful that a man who many have considered a national treasure should think it would be funny to besmirch Miss Liberty on her 100th birthday with the kind of glibness and vulgarity that, in truth, only brings discredit to him in the evening of his years as an entertainer.

“The Statue of Liberty survived all of the hoopla, slogans and souvenirs of the weekend--and it will also survive the morally crude and indecent language of Bob Hope. The Statue came through everything with its dignity intact. Regrettably, that is more than can be said for Bob Hope.”

In my opinion, this letter is good evidence that Hope probably made the joke; a government official putting this in writing would face scrutiny had the joke never happened at all.

However, I believe this letter means it is very, very unlikely that the Reagans reacted positively to the joke for a couple of reasons.

First, I do not believe the Reagans or Mitterrands attended the function in question.

The Mitterands were on hand for the major, televised ceremony on Liberty Weekend 1986, and President Reagan gave Medals of Liberty to various figures, including Hope. This massive event, which attracted thousands, cost $5,000/head and was mostly peopled by stars and power players. It occurred on July 4, 1986, and the festivities were televised. Here is an exhausting 4:38:29 recording of all the festivities. The New York Times reported on it:

Bob Hope did not make any AIDS joke on that telecast.

If you refer back to Bunzel's letter, he specifically states that Hope was performing for 360 people only, on a cruise on the yacht Princess. His anger over Hope's joke was not that it was anti-gay, but that it was sexually vulgar. If that is his complaint, why would he not have noted that the Reagans and Mitterands were there? Why would the Reagans and Mitterrands attend an event that held only 360 people and that cost a mere $1,000/head? They wouldn't.

I think Hope made the joke, and I think he made it on a private cruise for which he was probably handsomely paid, and that was arranged around his appearance at the main festivities.

In fact, if you check out this New York Times story, it would appear that the event was in honor of Lee Iacocca, and the president was not there:

“And we're having a party for [Lee Iacocca] on the Princess yacht with Bob and Dolores Hope and John Denver and Andy Williams and Rudy Giuliani, the U.S. Attorney, and Bob Morgenthau, the District Attorney, and Diahann Carroll.

“Bob Hope will give Lee an award for all he did and Vic Damone will sing 'That's Why the Chairman is a Champ.'”

According to yet another Times piece, the Reagans or Mitterands were NOT on that July 3, 1986, cruise, and I don't believe they heard the joke. (Rudy Giuliani was there!)

I think the episode is a mixture of truth and reality, and while debunking part of it shouldn't affect the Reagans' legacy when it comes to AIDS, it shouldn't be repeated, unless video or more evidence surfaces that it actually happened.