Susan Sarandon Goes There, Suggests She Could Vote For Trump Comments (0) 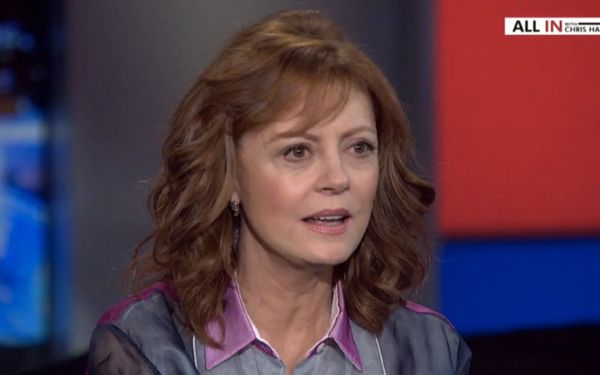 I've lost a lot of respect for Susan Sarandon over this one.

Sarandon, who felt Al Frickin' Gore was such a threat to democracy that she stubbornly supported Nader (and we all know how that turned out) is giving off a let-them-eat-coup attitude toward this year's presidential election.

Sarandon prefers Sanders. Good for her. He's my second choice, and I have no third. But in a conversation on MSNBC, Sarandon—whose distaste for Hillary Clinton is well-known—wouldn't even commit to voting for Hillary were she to win the nomination over Bernie, saying she'd wait “to see what happens.”

When prompted as to whether that implied she could really support Trump, she said:

Really... some people feel that Donald Trump will bring the revolution immediately if he gets in, things will really explode.

She says this like it's a good thing. She's about as much of a revolutionary as Patty Hearst. Am I supposed to believe a rich movie star like Susan Sarandon is hopeful our country will explode into revolution thanks to a critically unprepared President Trump, and she'll be out in the streets with the little people?

This is so elitist and disconnected an attitude, which is the total opposite of her actual political concerns—for women, for workers, for fairness.