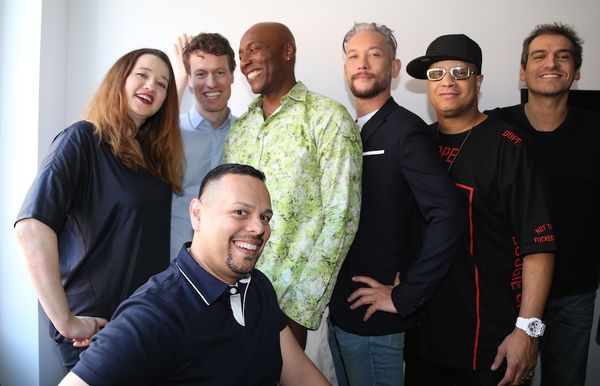 Strike a Pose, the touching documentary that catches us up on the lives of Madonna's dancers from her Blond Ambition World Tour and the ensuing warts-and-all documentary Truth or Dare, is currently playing the Tribeca Film Festival. This limited engagement was enough to score me some face time with five of the seven original dancers: Slam Gauwloos, Carlton Wilborn, Luis Camacho, Oliver Crumes and Kevin Stea (Gabriel Trupin died of AIDS in the mid-'90s and Jose Gutierez was doing another interview).

Check out my review of Strike a Pose

First, I thought I was getting them in a crowded round table session, so I only had a couple of questions prepared. After all, I'd once been in the same situation with Madonna and it had been a battle to get a word in edgewise. As I got into a cab, I received word I'd have them to myself. Gulp. Could I handle those guys? They seemed high-maintenance in Truth or Dare, holding their own in scenes alongside the planet's biggest superstar. On that topic, Slam later noted of Madonna, “She was not that insecure, you know? I think a lot of artists don’t do that because of their insecurities. She just was perfect at picking the good talent, putting it together, and just, in the end, it made her look better, too.” Kevin chimed in, “When you’re secure with yourself as a star, you want stars around you.”

I frantically dashed off some impressionistic questions. Lucky for me, I'd seen Strike a Pose as well as Truth or Dare and do know quite a bit about the subject matter, so even though I ultimately wound up sharing them with one other journalist, I was ready for these guys and wasn't too nervous that they'd gang up on me.

Making things easier, I found the boys—now men—to be extremely articulate, witty and forthcoming, as you might expect from the cast of Truth or Dare, which has been called the “grandmother of reality TV.” (I submit that Madonna might prefer “aunt.”)

If I dominated a bit, I hope the other writer can forgive me. After all, these were the guys who showed me it was okay to be gay, and who were in the position I most coveted 25 years ago: Madonna-adjacent.

As the film shows and as my life experience had already taught me, glamour is often an illusion, and reality is better anyway.

Keep reading for my talk with the guys, and with filmmakers Reijer Zwaan and Ester Gould ...

Kevin Stea: Um, how did it feel? Um, it, it, well—after so many years of, of, of reflecting back on Truth or Dare, I definitely felt like there was a lot more to say, so I think the things we were saying in the interviews were kind of the things we wanted to say for 25 years but were unable to. [Laughs] This was much more comfortable, though. It felt more intentional. Truth or Dare was more about capturing just what was happening, this was actually about our opinions and our experiences and our feelings and our emotions, as captured by Reijer and Ester.

Carlton Wilborn: And it’s also a different journey, having gone the documentary-filming process already. It’s kind of like getting back on a bike that you already know. Having cameras around you, knowing that you’re gonna do this, this kind of fumble-ness that may have been there before, we were much more anchored in knowing how to navigate that territory.

BC: Were you all on board right from the beginning?

Everyone: [Laughter, shouts of “no” and “Luis”]

Luis Camacho: I just didn’t know what it was about, and I just didn’t wanna answer another question about, you know, the ever-wonderful Madonna. But after meeting with them and having at least two dinners bought for me ... [Everyone laughs] ... I was just charmed by them, and I felt comfortable with them and I loved their honesty and transparency. They’ve been impeccable with their word so far.

KS: One of the most powerful things, I think, that made them so special is that their viewpoint is not an American sensationalist viewpoint. They’re Dutch filmmakers, from Europe, with a different perspective that only they could bring to this movie, and we all felt that.

Slam Gauwloos: [My b]eing from Belgium, they were different from the others who asked us to do documentaries and talk about Madonna. There was an immediate connection.

Ester Gould: Obviously, our goal was to get them all on board, but I do understand why Luis would doubt us and I think in general people who jump on being in a documentary too easily are often less interesting. Fighting to pull these guys on board was part of the deal. We had to strategize, like, “Okay, should we send them a cake?” [Everyone laughs]

Reijer Zwaan: We knew what we set out to do. When we met them, we saw how interesting they are and how interesting their stories are, so we were very sure about wanting to make a film about them. I think if we would have been in doubt ourselves of what we wanted to do, whether this was a way to get to Madonna, or something, it never would’ve worked out.

CW: And we would smell it.

SG: I think it was great, just the dancers, you know? No Madonna, no brother, no backup singers, just the seven dancers. That’s what really appealed to me.

BC: Truth or Dare demystified being gay. What about this film is demystifying… Oliver? I had a very different impression of you after I saw Truth or Dare than I did after seeing Strike a Pose.

Oliver Crumes: I mean, I was myself, but I was 19 in Truth or Dare.

LC: You were a brat.

OC: [Sassy] That’s not cursing. Whatever. (We’re like brothers.) When they did this movie, it was kind of a piece of cake to just be natural and normal. It’s not like they pushed me to say something. It’s not scripted. It was like, “Oliver… go!” [Everyone laughs]

OC: When I pull on my pink Adidas in the movie, that’s just me! The way it came out in the movie, it made me laugh. And when my wife interrupted me when I was talking about my Bell’s palsy, that’s just us. To find a woman like that and for her to put up with this [gestures to himself] I give her props for that.

EG: I think Oliver’s still as bubbly as he was.

BC: What was the hardest part of making Strike a Pose?

RZ: The hardest thing for us was the editing, because you have seven characters that are so strong and their stories are so impactful, but in the end we saw common ground in the fact that back then, it was all about “express yourself” as a message, and as something everybody was standing for, but then during research, we found that for these guys, even though they were examples for so many others, it’s hard to do that on a personal level—to just be yourself, to express yourself.

BC: When I saw Truth or Dare, your lives seemed glamorous to me and perfect, and in Strike a Pose, we learn things weren’t always that way. How did you find it to open up and expose yourselves so much this time around? Slam, you in particular came out about your HIV status in this film.

LC: It’s very empowering to tell your truth, especially after so many years of keeping us secret. It’s just … release that you get. Honesty is always the best policy. [All laugh]

SG: I didn’t know, kissing Gabriel, that it was, like, such a, like, big deal. But it was a big deal.

KS: I thought it was a big deal—it was hot! [All laugh]

SG: Yeah, it was, right? But I mean me, doing it, I never thought about it. It wasn’t like, “Everybody out of the closet, it’s gonna help a lot of people”—I never did it for that, and neither did Gabriel, I think. And we were so young. Now, with me coming out about my HIV status, I always wanted to do it and it was never the right time, and with this, Reijer and Ester came along, and it was the right time to do it and be aware of it and to hopefully inspire more people, do the same thing we did 25 years ago but be more aware of it.

CW: What’s amazing about this right now, for myself, is the irony—because I also was diagnosed in ’85, it’s in the movie—that the thing that I thought that I needed to keep secret, and wouldn’t allow me to have a rich and prosperous life, is exactly the communication that’s allowing me to soar in my career, because of what Ester and Reijer have created, bigger than I ever have before. We think we’re crippled by whatever. The way that they present us celebrates us because of that, in spite of that, and that’s amazing. 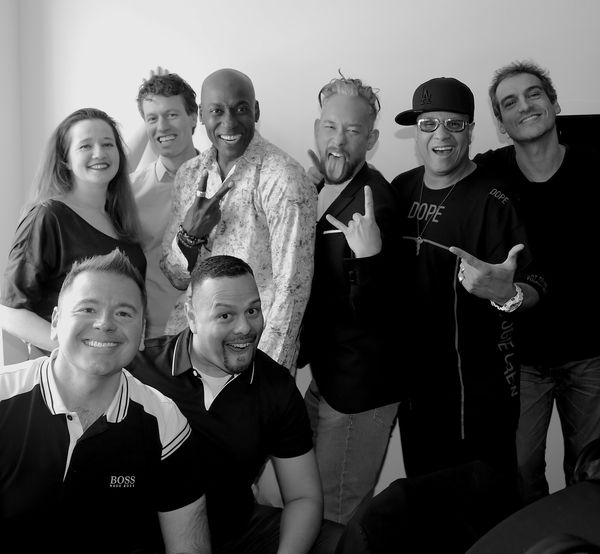 BC: The culture has changed to much. When I saw the gay kiss in Truth or Dare, the theater gasped. Do you ever look at culture today and think, “Wow, we are a part of that happening”?

OC: I think [Slam and Gabriel] opened up the doors.

RZ: Truth or Dare showed you could be gay and happy at a time where it was not shown at all—here they were, having fun, being themselves.

EG: Before that, it was problematized, so there was always something dark about it. There was something very liberating about it. You can be all these colors of gay. I think that was really extraordinary about Truth or Dare, that there was so much choice and color, all these guys from different backgrounds.

KS: Obviously, everybody else knew I was gay before I did, right? But I was literally questioning at the time, and being able to see all you guys and all the people we met on tour that were gay, that were normal people, crazy people, loud people—it made me understand I could be gay and still be myself.

BC: How do you think Gabriel would’ve reacted to this movie? Do you think he would've participated?

KS: Are you kidding me? He would’ve loved the opportunity.

LC: Yes, to express himself and to bring forth his own story. It’s been closure for us, it’s been a full-circle moment for us. Looking back, it’s what was missing, at least for me.

CW: I’ll say what feels nice about this also is the way we showed up in the first movie was light and playful and up here, and most people’s view of us was trite. Because we’ve developed and grown, there’s a real depth and seriousness about who we are. It’s nice to feel people acknowledging that.