You Heard Him Through Vine: Rickey Thompson Goes Viral Comments (0) 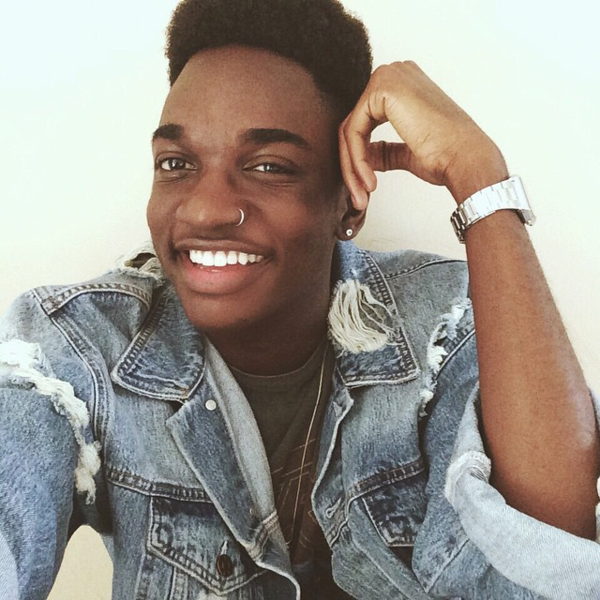 At 17, Rickey Thompson is a viral sensation, with over 2.5 million followers on Vine and 7.6 million YouTube views. Why is he so popular? Let's just say his personality has personality.

Now, Thompson is part of the cast of the new YouTube Red sitcom Foursome, which launched Wednesday. He plays one of the opinionated friends of Andie Fixler (famous on YouTube under the handle JennxPenn), who's trying to date in high school under the all-too-watchful eye of her overprotective big bro.

Keep reading for my interview with this rising star, who does not look like broccoli on crack, as he's fond of saying ...

Boy Culture: What does it take to be as successful on social media as you are, or is it different for each person?

Rickey Thompson: My success is all about being authentic. I cant be anyone else but Rickey! It takes hard work, determination and loving what you do.Your main focus should be about having a voice that will inspire others to do what they where born to do.

BC: Your Vine/YT Channel is hilarious—did you always know you were funny, or did you find your voice as you started posting videos?

RT: I feel like i've always been funny even when I wasn't trying to be funny. All my life, everyone always thought I was the funny guy. Vine/YT has given me a platform to showcase my humor and I'm very thankful for that!

BC: Your confidence is a huge part of your funniest videos—is it an act, or are you really that comfortable with yourself?

RT: I haven't always been confident in who I am. I have learned through my struggles the importance in loving who you are. I will say making Vine/YT videos has enhanced my level of confidence. My main focus is about teaching others to be happy with themselves.

BC: What's your advice for others, especially gay teens, for how to tap into that kind of confidence?

RT: My advice is to surround yourself with positive people who really care about you and are accepting of the way God made you. Don't allow the opinions of others to affect the way you feel about yourself.

BC: Do you ever look back at old Vines/YT videos and find flaws or hate how you look or regret them in any way?

RT: I feel everyone has something they look back on and want to change. I look at old videos and I do wish I could change some things; like my clothing or the way I told a joke. I will say I am happy with the majority of my videos.

BC: What is your #1 favorite Vine/YT video you ever made (or maybe your favorite one-liner or moment)?

RT: It's pretty difficult to pick one of my videos as a favorite; however, I will say I love saying my popular phrase, which is: Swag money all day. I hear countless people saying this all the time and I absolutely love it!

BC: Have you had a lot of friends trying to get in on your social-media action?

RT: Yes, I have had a few; however, the majority of my friends have been very supportive of my career. I have given advice to many friends and associates on how to find their voice on social media.

BC: What music most inspires you?

RT: Although I enjoy different types of music, the music that inspires me the most is called underground music. It's edgy, fresh and different from the other types of music. I have put together some creative videos while listening to this genre of music.

BC: What performers/comedians do you think have influenced you?

RT: Amy Poehler, Johnny Depp and Rihanna have influenced me so much. Each has their own unique style that has made them extremely successful in an industry that has been so traditional.

BC: Have you ever been approached to do voice work? You need to be!

RT: Yes! I actually have. Being in theater for many years has helped me refine my acting voice.

BC: You're an out public figure—what do you think about performers who decide not to be professionally out?

RT: Thats a personal choice that each person is allowed to make. Because of my desire to be authentic, I chose to come out. I'm hoping that coming out has made a difference in the lives of people who felt like they couldn't come out.

BC: What can we expect from Foursome? Was it your first acting experience? What did you expect and how did it live up to your expectations?

RT: You can expect to experience a wide range of emotions, including a lot of laughter and a strong appreciation for the true meaning of friendship. I have been acting since the third grade; however, this was my first major role on the big screen. I knew this series would be a lot of fun and would allow me to make some new friends while showing my love of acting. The experience was everything I thought it would be.

BC: What's your actual high school experience like compared to the one your character is having?

RT: There are many similarities between my high school experiences and Dakota's experiences. I had many female friends who wanted my advice on a wide range of topics. I wasn't always as confident as Dakota while I was in high school. I will say Dakota and I share the same type of humor.

BC: What other kinds of parts would you like to play?

RT: I would love to play a villain, superhero and any other role that will challenge my acting abilities. I am excited to see what opportunities will exist after Foursome.