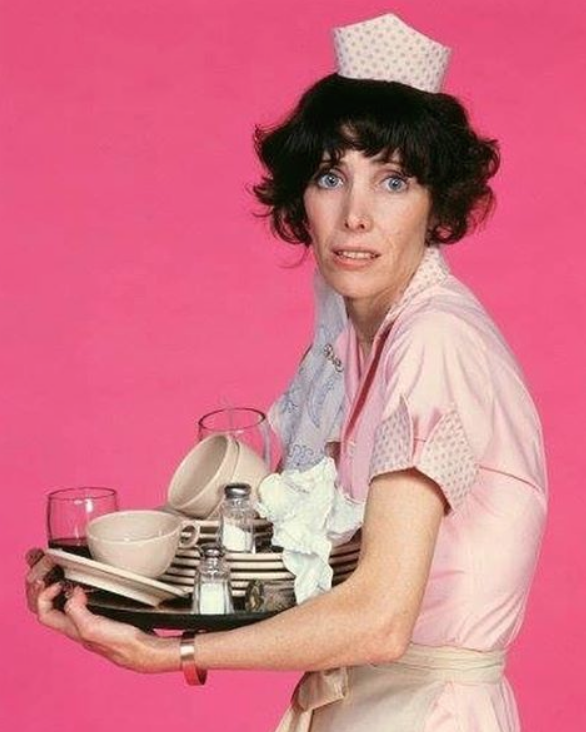 So sad to report that the delightful Beth Howland of Alice fame has died at age 74.

Just last week, I was at Joe Allen in NYC and remarked that a friend of mine, within the past couple of years, had encountered Howland and her husband, Murphy Brown's Charles Kimbrough, and been granted a picture. (Her first husband was Michael J. Pollard.)

More ironically, she was already long-dead—she died on New Year's Eve, but she didn't want her death announced.

From The New York Times:

The cause was lung cancer, her husband, the actor Charles Kimbrough, said, adding that she had not wanted a funeral or a memorial service.

“It was the Boston side of her personality coming out,” Mr. Kimbrough said. “She didn’t want to make a fuss.”

Another snippet from her obit is so 1970s it has to be savored:

After being cast as the wife of a character played by Bert Convy on an episode of “The Mary Tyler Moore Show,” she moved to Los Angeles to work in television. She appeared on “Love, American Style,” “Cannon,” “The Rookies” and other shows before taking the role of Vera on “Alice.”

Along with her work as Vera—who had a Katharine Hepburn-esque quality spiked with inimitable dottiness—Howland was of course famed for her “Getting Married Today” from Company. Here she is reprising her performance in 1993 at an original-cast reunion: