30 Years Ago Today: Madonna's TRUE BLUE — The Coolest Album In The Universe — Was Released Comments (0)

It's hard to believe it's been a full 30 years since Madonna dropped her third studio album, the delightful, singles-heavy True Blue.

Were you alive then? Did you buy it upon release? What is your memory of it?

I believe True Blue was the first Madonna album I bought the day it came out. I didn't buy her first album until well after her second, 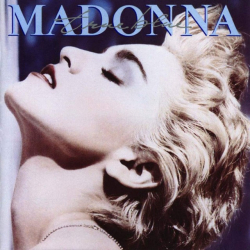 which I bought only after having realized I was slowly dying without it. I remember going to Genesee Valley Mall in Michigan and being dazzled by that Herb Ritts cover, an instant classic. Her face was the entire cover! So arty, like a high-grade Andy Warhol Polaroid.

I like other Madonna albums better, but there's no denying the artistry of “Live to Tell,” the urgency of “Open Your Heart,” the unique voice of “Papa Don't Preach” and the timelessness of “True Blue.”

The record went on to become one of the best-selling albums of all time, and is Madonna's best-selling studio album worldwide.