Pedro Julio “Pochi” Serrano is one of Puerto Rico's most visible LGBT advocates, as well as an HIV-positive voice on HIV/AIDS issues. Today, he was set to become the first-ever gay-rights figure honored at the Puerto Rican Day Parade in Manhattan ... but the cars sent to transport him and his party specifically rejected the job because they refused to carry gay passengers.

In a Facebook post (in Spanish) Pochi, lamented the fact that The Custom Shop—whose HQ is apparently in Queens, New York—refused him service, but celebrated the fact that he made it to the march anyway.

Incredible in this day and age, and in New York City!

UPDATE: The Custom Shop has replied to my Facebook post with their side of the story. Gee, I didn't realize being gay was an issue a business had to stay neutral on. How about being a woman or being black? Check it out: 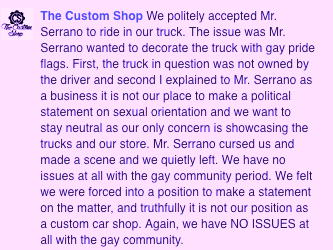