The Eiffel Tower is lit up like a rainbow in solidarity with Orlando https://t.co/zJeMpOuGtl #lovewins pic.twitter.com/rhJ4jWMn7w

International outpouring of support for victims of Orlando rampage.

State Rep. Andy Holt (R-Tennessee) will give away same rifle used in Orlando slaying at fundraiser. Because rights.

Trump uses Orlando tragedy to double down on his war-baiting views on Muslims: “I don't want them in our country.” 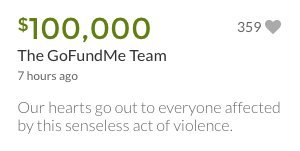 Watch Anderson Cooper choking up as he honors the 49 people murdered and 53 injured at Pulse:

"They are more than a list of names. They are people who loved and who were loved." - @andersoncooper #Orlando https://t.co/DkxxPC1XtW