RIP to all the Pulse victims (GIF by ezgif.com)

Many of the 49 people murdered by Omar Mateen have been identified now; quite a few are seen in the GIF above.

Read more about them here and here.

Disproportionately Latino, black, and gay, three things the vile Mateen despised, according to a former co-worker and one of his ex-wives.

With people like Donald Trump hinting that President Obama may be sympathetic to Islamic terrorists, and with people like Geraldo Rivera casting aspersions on the courage of these victims for allegedly not doing enough to fight back (hope you'll get a chance in a similar situation, my man), we have to focus on who they were—they were just like most of us, and they were just out having a good time.

A couple of notes on the victims:

J.K. Rowling posted emotionally about Luis Vielma, a 22-year-old who worked on the Harry Potter ride at Universal, saying, “I can't stop crying.”

Luis Vielma worked on the Harry Potter ride at Universal. He was 22 years old. I can't stop crying.

Amanda Alvear's final moments were recorded on Snapchat; she'd been joyously recording bits of her evening, and the final clip showed a close-up of her face while a series of shots rang out in the background. 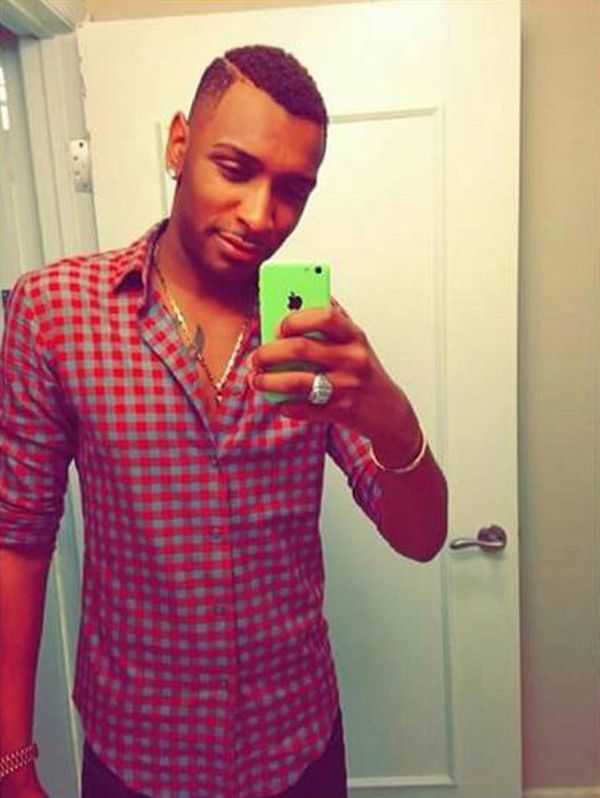 Echoing the unforgettable stories from 9/11, when dozens of people called their loved ones in a panic in their final minutes, Eddie Justice's story is particularly gut-wrenching. He texted his mother, “Mommy I love you” “In club they shooting” “Trapp in bathroom” “He's coming” and finally “I'm gonna die”.

My FB friend Jeffrey Michael touchingly, hilariously remembered his friend who died at Pulse in a way to which I'm betting many gay fans can relate: 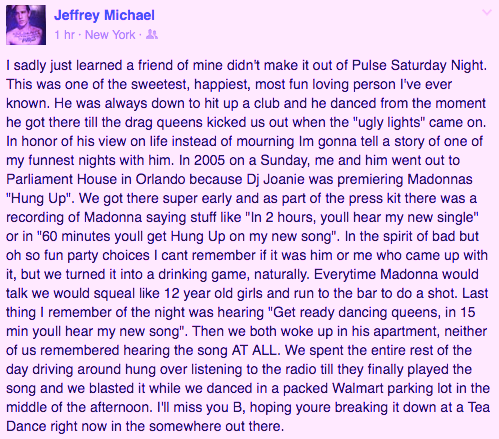 The latest on the shooting is that President Obama believes—and this seems pretty clear—that Mateen was not directly supported by nor was he directed by ISIS to commit his crimes, but rather was self-radicalized.

Presidential candidate Hillary Clinton has referred to the inspiration for the murders as radical Islamism, a shift for Democrats treading lightly so as not to play into terrorists' hands—it's clear they want the U.S. to single out Islam and turn this into a global war. As long as we're clear it's not Islam, I think calling it radical Islamism is perfectly appropriate.