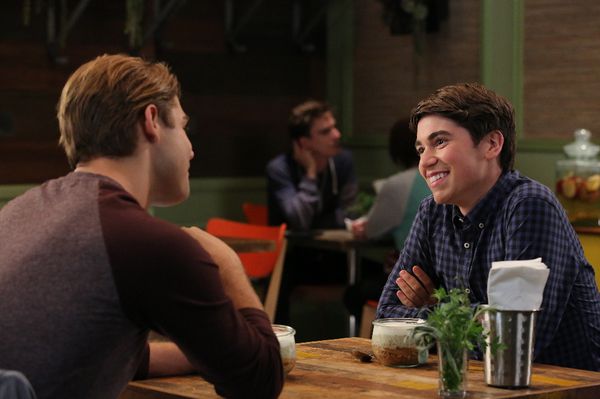 Noah Galvin (R) is not ready to play nice. (Image via ABC)

I'm not gonna slam The Real O'Neals star Noah Galvin for his at-times unfortunate, at-times excitingly candid interview with Vulture, in which I think he sounds too sure of himself by a factor of four, but I do think some of what he says is a bit misguided.

First off, I like that he's honest and has positions. He admires Dan Savage and I think that Savage's outspokenness is rubbing off:

He's also to be admired for being a 22-year-old who is out and proud, and who recognizes the impact of being out:

It's important to me that with this slightly revolutionary thing we're doing on network television that I should go full force and follow through as completely as possible. And it's paid off in ways. In terms of, like, the kids who watch my show and say thank you for being open about who you are, and playing this character, and bringing a level of authenticity that maybe somebody else wouldn't have. I like to think it makes it that much more relatable. And older people who watch the show are like, damn, I wish I had something like this on TV when I was younger to normalize my situation and make me not so self-hating.

But speaking of self-hating, it's jarring that Galvin is so contemptuous of Colton Haynes, someone I've criticized for trying to expunge gay images of himself from the Internet in the past, but who has since come out—not only as gay, but as having severe anxiety, which I think goes a long way toward excusing him for not being Harvey Milk in his twenties. Rather than commending Haynes on coming out, Galvin brands him “the worst” and, well, worse:

I don't think Haynes deserves that, nor do I think Eric Stonestreet—who plays gay on Modern Family in a way that I understand some gay people seem to find a little too gay—deserves to be trashed for his performance. I think he is very broad on the show, but so is Jesse Tyler Ferguson, so is Sofia Vergara, so are all of them—they're supposed to be recognizable, but ridiculous.

When Galvin talks about his sex life—he is pretty blunt about Bryan Singer (“Bryan Singer likes to invite little boys over to his pool and diddle them in the fucking dark of night.”)—he just kinda comes off as snotty:

First of all, I’m gay, and that’s just hard because gays are naturally a promiscuous collective of people. So there’s the lack of monogamy and then there’s me looking like a 12-year-old. And then there’s being in L.A., where half of the men are closeted and the other half are just dumb. But also gay boys my age are either club kids or they’re in college and they haven’t come out yet and they’re still DL on Grindr. So I tend to date people that are slightly older, but then I get into this situation where they’re just, like, twink hunters. I’m like, “No, I don’t want to date you, you 45-year-old man.”

I think he sounds like he's too good for everyone, not very sex-positive (paging Dan Savage!) and while he acknowledges he's usually with older men (because, presumably, they're better adjusted to being gay and are not “just dumb”—believe me, some are!), he worries about “you, you 45-year-old man.” That sounds more than a little ageist when he's copping to dating someone he thinks is 38.

I dunno. It sounds a bit jaded to me, and ageist, if also super smart. I still haven't watched his show, though everyone I know raves about it and I am of course glad a show with a gay 16-year-old is renewed for Season 2. I wouldn't toss him over this, but it's not endearing.

Other gay readers will focus on the take-no-prisoners, proud-to-be-gay tone of some of his remarks, and I get that, too; that's rare in Hollywood, and to be encouraged.