Be Afraid ... Be Very Afraid: The New GHOSTBUSTERS Is a Cringe-Worthy, Empty, Unfunny Stab At A Girl-Powered Resurrection Comments (0)

I wasn't offended when it was announced that Ghostbusters, an '80s fave but hardly Citizen Kane, would be remade with a female cast. With Kristen Wiig, Melissa McCarthy, Kate McKinnon and Leslie Jones—with Chris Hemsworth and cameos by most of the original cast tossed in—how could it be anything but fun?

It is anything but fun.

The film is ineptly directed by Paul Feig with a distractingly off-the-mark tone, is terribly witless, is charmless (except in rare flashes) and contains 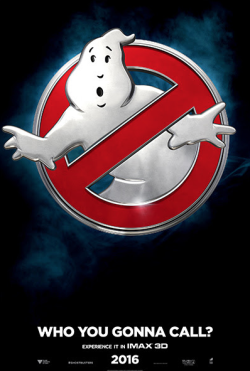 mostly phoned-in performances. You almost expect a scene to catch Wiig and McCarthy hitting their marks after quickly exiting cash machines, where they're ogling all the loot they made for doing nothing but their most boilerplate schtick.

Jones is irritatingly one-note. Her undercooked Eddie Anderson/Mantan Moreland routine is painfully dated. I like her as an actress and I think she would be an excellent lead, given a multi-dimensional role, but she wasn't given a lead or that type of role here.

Still, you know you're in trouble when you can write better jokes to improve every scene in your head as the film unfolds, and that mental workshop becomes vastly more entertaining than the awkwardly, at times embarrassingly broad comedy unfolding before you.

At one point, Jones's character exclaims, “This is so not good.” It sums up the entire misfire of a half-baked remake, which has zero attention to detail (a ghost shakes up a rock concert and no one has their iPhones out to capture it save for one couple snagging selfies), zero comprehension of how to do nerdy humor and, worst of all, a misguided feminist wink here and there intended to razz the male fans of the original who seemed dead-set against the idea of women taking over their club.

Turns out they were right that the new Ghostbusters would suck; they just got hung up on gender without giving the film a chance to fail miserably based on its own merits.

Leading up to this screening, I'd been arguing with people mortified that Feig—whose career should take a hit over this—would attempt to re-do something dear to them.

The old Ghostbusters really wasn't Citizen Kane, but it had a wonderfully sustained sense of whimsy, the impeccable timing of its stars and an unselfconscious understanding of the pop culture of the era it was in. It knew how to make teenagers giggle and adults giggle against their better judgment.

The best the remake can offer is a queef joke.