That CERTAIN Summer: A Review Of BOYS OF A CERTAIN AGE Comments (0) 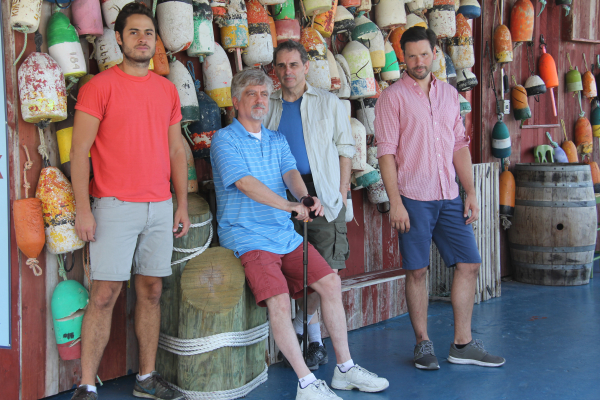 I was lured to the Lower East Side for a second day in a row, this time to take in the new play Boys of a Certain Age, written by Dan Fingerman and directed by Dan Dinero. Part of the Fresh Fruit Festival, the 90-minute piece nails down four very different, very similar gay Jewish men sharing a tense weekend that's supposed to be a chance for old friends to get reacquainted and new acquaintances to become friends, but which winds up being a knock-down, drag-out examination of what motivates members of different gay generations.

Liberal firebrand Ira (R. Scott Williams) is hosting his gay Republican nephew Christopher (Brian Gligor), as well as his childhood friend and former flame Larry (Joseph J. Menino) and Larry's snarky son Bryan (Marc Sinoway). The men rub each other in all the wrong ways from the get-go, with Bryan lashing out at the Trump-supporting Christopher, Larry riding his son about his slacker ways and Ira challenging all of them to live up to his standards. Each of them has a secret and is touchy when pushed to reveal it.

Revealed in short vignettes, the events of the weekend are a mixture of funny, moving, confrontational and conversational, with major rifts and both personal and LGBT history to navigate. The dialogue is at times a little on the money, but frequently takes left turns into fresher territory and startlingly topical terrain (the 2016 election, Pulse gay nightclub shootings and Dallas sniper attack all come up).

The performances are all solid, with Williams ranging from Dixie Carter flair to The Normal Heart melancholy, Menino coming off as a wholly believable ubermensch, Gligor making for the most likable gay quisling ever and Sinoway effortlessly sizzling as a self-righteous millennial who really thinks you should look into Jill Stein. Like now. (His thighs did pull focus in some scenes, but that's the chance you take when you set a gay dramedy on the beach.)

All in all, while the production feels slightly under-rehearsed—or maybe more like a Broadway production in previews—due to some timing bumps, the material is challenging, intelligent, witty and full of surprises; one hopes it will find new life once it closes Tuesday, July 19, at The Wild Project (195 E. 3rd St., NYC).