Gena Rowlands On A WOMAN UNDER THE INFLUENCE Comments (0) 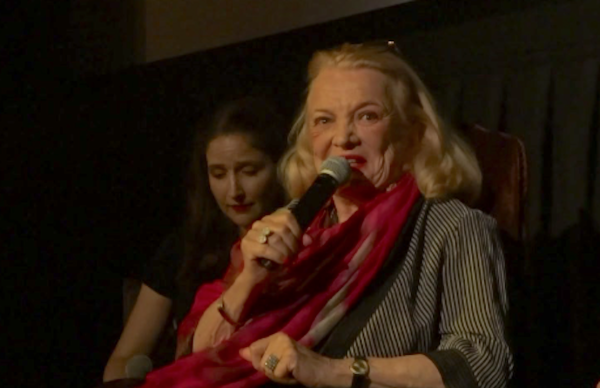 Rowlands answers my question about working with kids. (Image by Matthew Rettenmund)

I was privileged to attend a screening of A Woman Under the Influence (1974) at Metrograph, NYC's fantastic new Lower East Side theater that shows classics and quirky non-classics, after which star Gena Rowlands appeared to answer questions about her greatest role.

Rowlands, 86, won a Golden Globe and was nominated for an Oscar for her incredible performance in the film, in which she plays a mentally unstable wife and mother whose husband (Peter Falk) is touchingly in love with her quirks and disturbingly unprepared to handle them. The cast is rounded out by non-actors (her real mom, who lived to be 95, played her character's hapless mother in the film) who somehow hold their own against Rowlands' tour-de-force portrayal.

The crowd was young, period. I felt like the missing link between Gena's generation and the one seated around me. A nearby restaurant was so hipster it was a self-parody, offering organic eats and featuring a chef in a Bernie T-shirt. When I ordered a Diet Coke, the pale young bearded fellow acting as my server informed me sweetly that he didn't have soft drinks but had a variety of homemade beverages. It was a safe space for your tummy.

Kidding aside, with all the negative impressions of millennials, it was nice to encounter a slew of them with a healthy appreciation for something that came before. The kid next to me informed me he hadn't seen the film in five years, suggesting a rich arthouse catalogue bubbling in his head, and the questions people asked were, to a one, intelligent and unembarrassing. I've never been to a Q&A like this at which at least one or two mortifyingly inappropriate, self-involved, non-question questions aren't asked.

I captured the Q&A, an edited version of which appears after the jump. In it, Rowlands speaks about the film—which she's only ever seen one time—as well as about her late husband John Cassavettes's artistic approach. My question involved her incredible bond with her character's kids in the film, which also led her to talk a bit about her second most famous role, in Gloria (1980) ...