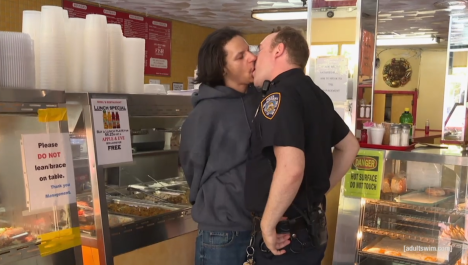 He kissed a cop, and he liked it! See this clip after the jump ... (Image via Adult Swim)

Towleroad's Mark Allen corners outrageous comic Eric Andre on all things LGBT, getting him to admit—in terminology I haven't heard used in decades!—that he is, for all intents and purposes, bisexual:

EA: I think everyone is bi, right? There’s no such thing as sexual orientation, or race, or gender. Those are all obsolete man-made concepts. I’ll say it again, a hole is a hole.

So Eric Andre, would you say you’re coming out as bisexual?

EA: I’ll f*ck anything that moves.

Watch him suck face with a fake cop after the jump ...