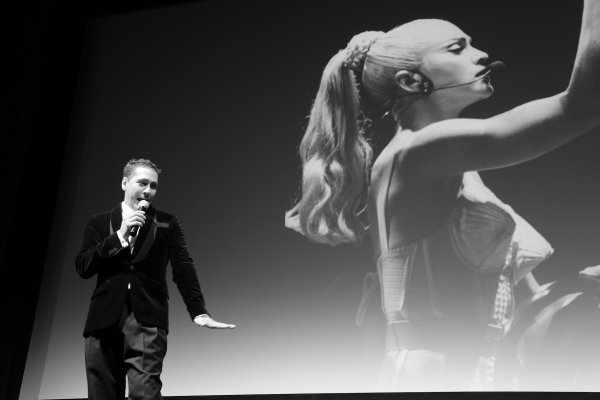 Host with the most, Joe Berger (All images by Matthew Rettenmund except for Instagram embed)

Joe Berger has been working his heart out to get Madonna's glory years on film properly acknowledged, first with an invite-only MoMA screening of the 1991 gem Madonna: Truth or Dare (at the time the most successful documentary ever), then with a special evening devoted to choreographer-director Vincent Paterson, then with a Madonna film series at Metrograph that embraces the best (Dangerous Game) and worst (Body of Evidence) she had to offer. 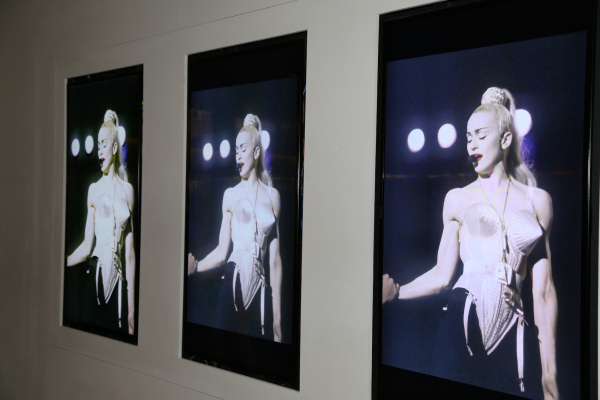 Madonna posed by these Warholian images in the lobby 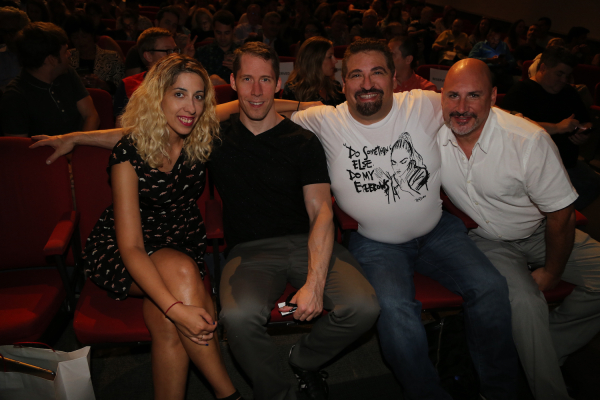 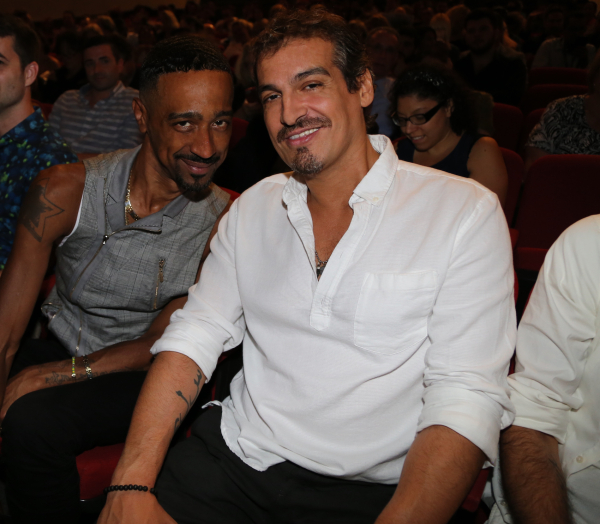 So think of it as Kabbalistic karma that tonight, at his Truth or Dare event, Madonna herself shocked the entire room by showing up totally unannounced (her publicists knew, the MoMA curator knew—that was it) to sit in the middle of the audience and watch every frame of the film. 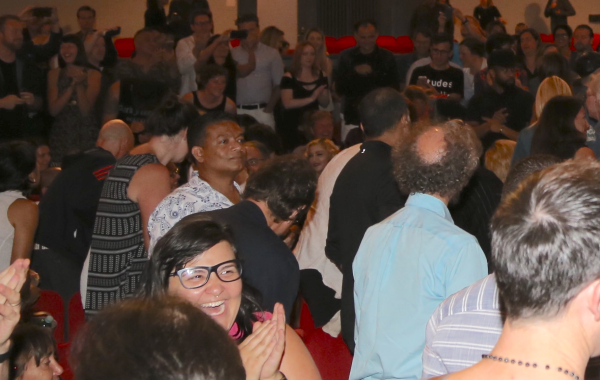 Can you spot Madonna in this pic?!

Yes, that means we sat in a room with Madonna while she watched herself being Miley Cyrus I, while she joked about being nailed by her father, while she kibitzed with Sandra Bernhard, while she cavorted with her dancers who she swore she would love forever (some of whom then sued her), while she laughed when told her hair-and-makeup girl might've been raped. The works. 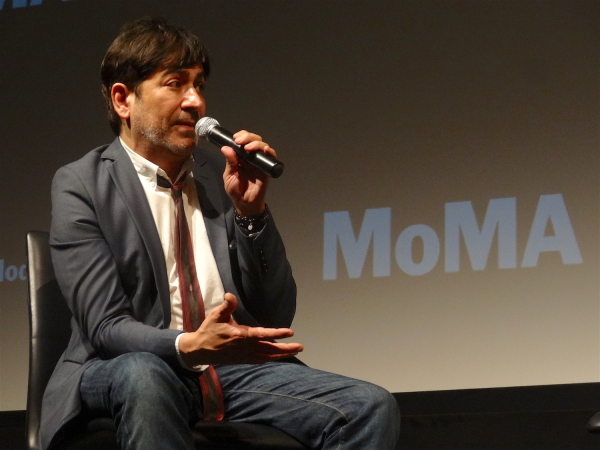 Keshishian reminded us of how brave Madonna was to let this film be shot. 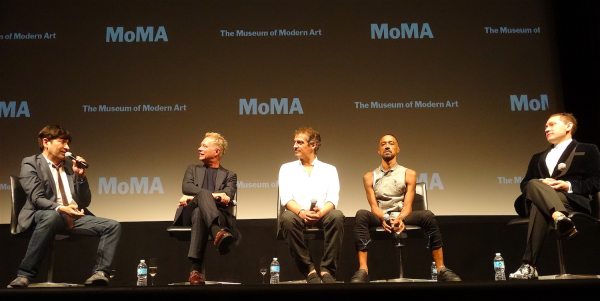 The panel discussed Madonna's respect for people who push back.

Madonna's like a cat, though—when she falls, she can convince you that was her intention. More often than not, she simply avoids falling, and she never, ever looks backward, so her appearance at the MoMA to take in a film that is, regardless of any personally squirmy moments for her, a brilliant piece of filmmaking and one of the best things with which she's ever been associated, represented a sea change in her behavior, if only because it is something she did, not something she's doing.

And this shift was so welcome! 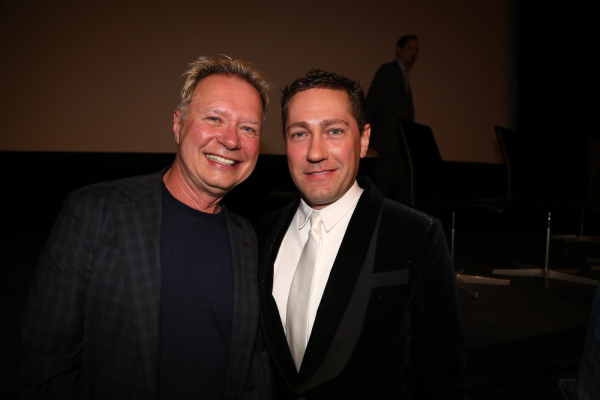 Joe with the great Vincent Paterson 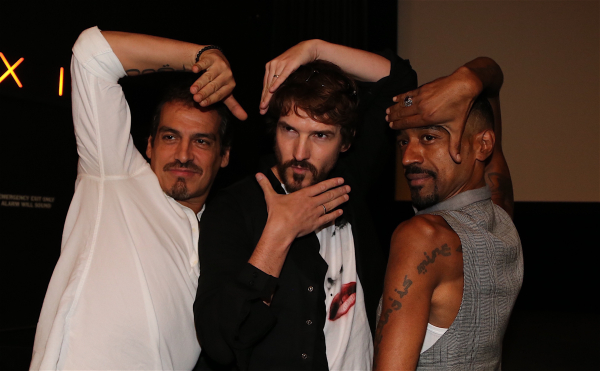 Vogueing with the best of 'em

The screening had been delayed a while when the curator urged patience, noting we'd be happy in the end. This made us jokingly guess that Madonna would surprise us, but definitely nobody thought it was a likely occurrence. When she appeared, a vision in an off-the-shoulder red dress, daughter Lola in tow (Lola spent the movie marveling at the outfits she coveted), Madonna smiled warmly but said nothing, instead content to be just another spectator as one of her greatest spectacles was unfurled on the big screen.

Actually, she first listened to Berger's heartfelt intro to the film, which must've been his dream come true. (Dreams come true, you guys!) 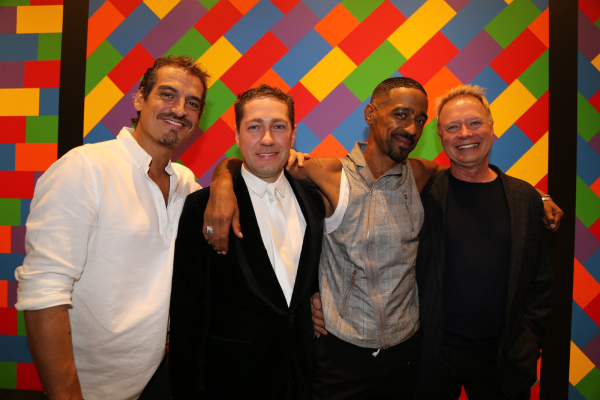 To say the movie has aged well is to say the same for Madonna—it's so obvious it hardly needs to be said. Truth or Dare was ahead of its time in dealing with gay rights, in touching on the spectre of HIV, in presenting a star to the world in whole—no filters needed. The concert footage is arrestingly crisp, the songs timeless and the black-and-white vérité elements look like they could've been filmed yesterday.

I'm thrilled that Madonna has at long last shown up and embraced a major moment from her past. Perhaps this is a toe in the water of legacy-enshrining without wallowing in nostalgia. Well done, Madonna. Next time, just get up on the stage and say hello before you take off!

After Madonna skedaddled (I'm told she had greeted Paterson with a kiss and a compliment—he last saw her making Evita!), Berger expertly quizzed Truth or Dare director Alek Keshishian, Blond Ambition co-director/choreographer Vincent Paterson and Blond Ambition dancers Salim (Slam to you!) Gauwloos and Jose Gutierez on a variety of topics, teasing out the fact that the legendary unused 250 hours of footage Keshishian shot is now ... gulp ... lost.

It was a convivial chat and one that ended with Keshishian praising Berger for his dedication to ensuring that Truth or Dare received its due.

After, I snapped the pics you see in this post, but missed Madonna—she left and her appearance had been so top-secret, it never occurred to me that she would stop outside in the lobby for posed shots (by a pro shooter—maybe called last-sec) before vanishing.

Don't hold onto the past? She isn't even close to doing that. But she is at least acknowledging it, and along with it, the meaning her work has to her legions of fans.