Lady Gaga's PERFECT ILLUSION Is Here: That's What It Means To Crush Comments (0)

I'm a sucker for seemingly superficial (as the medium is pegged) pop songs with transcendent yearning in the vocal, 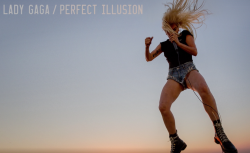 even if the lyric is simple or even banal (it's not banal here, just very direct).

This doesn't feel earth-shattering like “Paparazzi” or some of her very best hits, but it also doesn't feel canned like some of Born This Way and all of Artpop. I was thrown by the Led Zeppelin “The Immigrant Song” fake-out opening that I heard yesterday, which isn't very reflective of what follows.

Yes, the phrase “Perfect illusion” is sung identically to “Keepin' my baby,” but c'mon, some overlapping in pop is okay and the song itself bears zero resemblance to anything Madonna-like. As I'm sure others will say, her vocal has a Donna Summer thing when she's not pushing it beyond that into a rockier territory—total Pat Benatar vibes whens he does that. Not that there is any copying (I hate that that always has to be noted when making comparisons these days, sigh), but I get a Barbra Streisand “Prisoner” vibe at times from the controlled-hysteria quality of the vocal, which later becomes uncontrolled, though she never goes into a full-on “Ray of Light scream.

The similar yearning feeling I get is at around :54:

Most surprising to me is the part at 1:51 when she takes it up still another notch and makes it more urgent.

I'm surprised to read that some fans don't like this?! I mean, there's no accounting for taste, but this is better than anything on Artpop and superior, if similar, to the better bits on Born This Way, like “The Edge of Glory.” “The Edge of Glory” was fun but felt a little like, “I'm doing Bruce now!” whereas this song—in spite of not sounding like nothin' you've ever heard before—feels more organic.