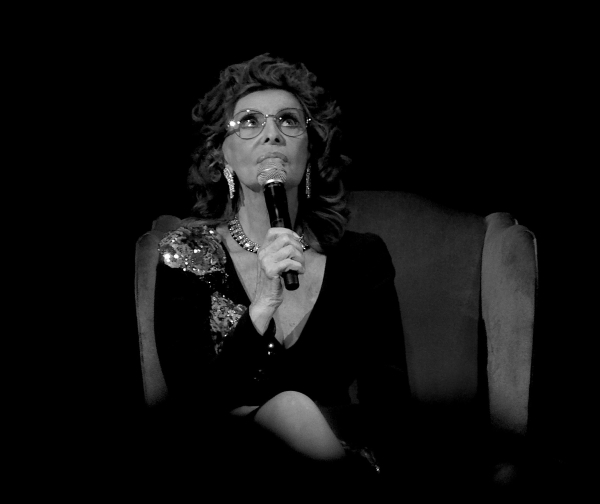 Last night, I did something new after 24 years in NYC—I went to Staten Island, the fabled most conservative borough.

I was lured there by a siren's song: Miss Sophia Loren was making an unusual appearance on her Q&A tour, An Evening with Sophia Loren. 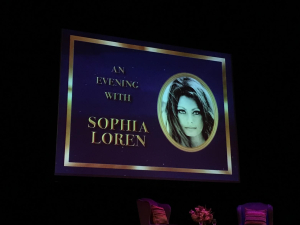 I find it odd that she would appear on Staten Island, but I think the tour is economically driven (she wants the money, not just remind us of her fabulousness) and the venue—the St. George—was probably much cheaper than anything in Manhattan. It certainly felt cheaper—it was frankly like the event had rented it out and the venue provided little more than a skeleton crew to move things along.

She's actually appearing in Detroit next.

Getting there wasn't half the fun, but it wasn't too much of a bother, and the ferry ride cooled me off. You may have heard that New York was stultifyingly hot recently. I went in and got my VIP pass, which was the very first moment I was notified that Sophia would not sign autographs at the $400 photo op. That seemed pretty stingy to me. I went back outside and spotted some autograph hounds by the stage door, listening in as one guy bent the ear of a security guy who could not have cared less as he talked about the various celebrity encounters he'd had in his life. I decided to hang there on the way, way off-chance that she would be accessible upon entry since only five or six guys were waiting and I had a nice pic for her to hopefully sign. 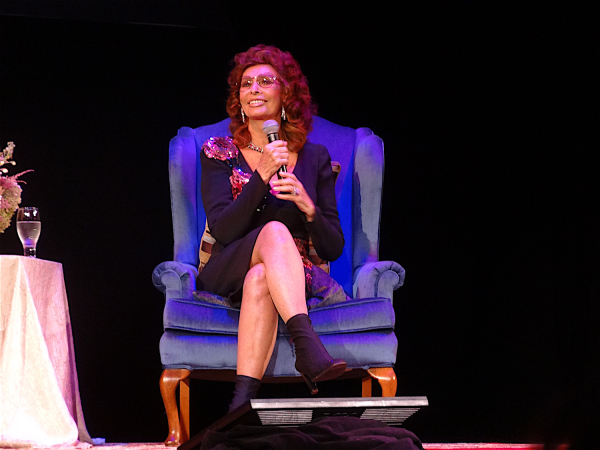 Her manager walked by us, never mentioning the inevitable—that she planned to be driven straight into the building and would enter without anyone laying eyes on her—until he was finally directing her SUV into the back entrance. At this moment, these pigs who hadn't been waiting at all physically pushed past us to get closer, but they got no more a glimpse of her than we did. My motto is to try, because I'd rather have her autograph than not have it, but I wasn't going to lose sleep. I think the nice guy who had roses for her might have.

Back inside, I saw they were selling signed posters for the event, another reason they weren't going to allow autographs. They were nice enough for $100, but I didn't bite just in case I could weasel a signature out of her later. 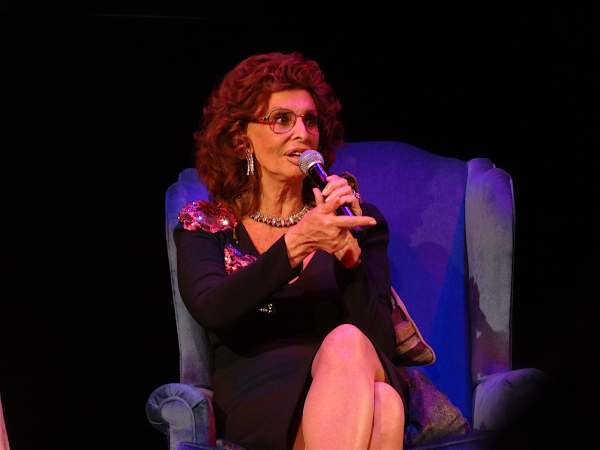 Loren kept chastising the audience for assuming everything was a double-entendre.

I was shown to my fairly close (but not pit) seat, where it soon became apparent that the theater was majorly skimping on the A.C. On a 90-degree day, that sucked hard. I was sandwiched between two older couples in a sea of older (but not exclusively old) couples and not a few young, clearly Italian admirers of both genders. It was so tight and so humid I almost got up and left; I'd been battling a headache all weekend.

The event began with a showy entrance by Loren, who at 81 looks about the same as she looked 30 years ago—same tinted glasses, big (but good) wig and those Barbra Streisand boots for stability. She has kept her statuesque presence and legendary curves, with her wobbliness the only indication of advanced age.

Once seated, the Q&A began. I won't name the nice-seeming moderator, but I am very sorry to say he was ill-prepared; he was no match for Loren's kittenish bitchiness. She gave him such a hard time she at one point had to underscore to him that she was only kidding when she pushed back. But one question after another, usually about something she'd said in the past, was met with her assertions that he'd gotten in wrong.

Things went south fast when Loren was handed a mic instead of being wired or having a standing mic. “I am a star,” she cooed, demanding a mic she didn't have to hold. “In silver.” The venue was of no help.

The Q&A had no sensible arc, like Carol Burnett's does, hitting Loren's early, pre-fame life pretty heavily, which meant plenty of stories of her as a starstruck teenager with a Garbo look-alike for a mamma before we got into some interesting aspects of her brilliant career, including clips from films like Two Women (1960). When the clips were shown, Loren would gaze into a monitor on the floor, openly enjoying seeing herself. I found this extraordinary, as some glamour girls might bristle at being shown images of themselves at their physical peak. Instead, Loren lapped up her own lusciousness as she stripped in The Millionairess (1960) and stripped  Marriage Italian Style (1964). 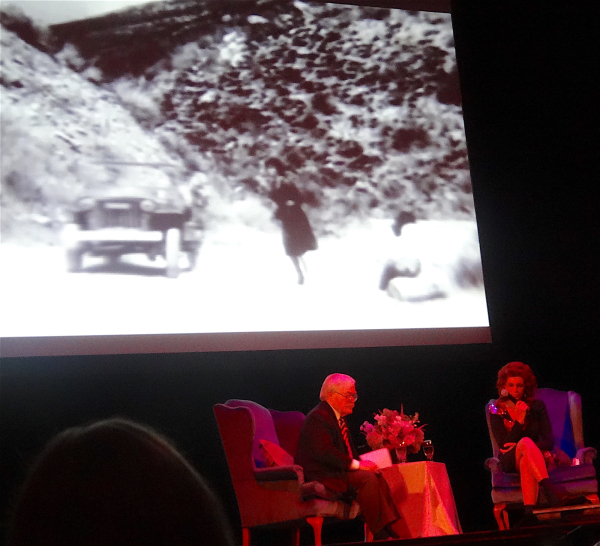 Watching herself in Two Women

She's stripped a lot, but she's also got amazing talent, as she was the first to remind us. I loved her ego! She told us more than once we simply could not imagine what it was like to win an Oscar (we know!), she made sure to bring up how important it was that she won an Oscar in an Italian-language role and she fondly remembered the days when she was cute and sexy. (She's still damn sexy.)

There were many missed opportunities, but she did comment hilariously on Cary Grant:

She also got weepy when sung “Happy Birthday” (she turns 82 on September 20), which was quite a memorable moment; for all 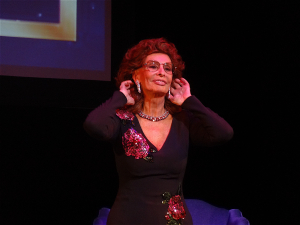 the tough-girl talk, she was vulnerable to sentimentality. She also had some funny, self-deprecating quotes about aging. When one audience member said Sophia looked like her mother, Sophia wanted to know the mother's age. She also complained that everyone made too big a deal of her age once she hit 80, but when the host suggested her past advice that happiness helped keep her young, she frankly admitted, “Not at 80.”

When the whole thing was over, there were aspects of her life and career left undiscussed, even in the rapid-fire questions that had been submitted in writing by the audience. One such question was so controversial that the moderator handed it to Loren to read—she glanced at it and threw it down in disgust. Was it about her stint in prison? He should've known better than to try whatever it was.

All too soon—she was on the stage about 70 minutes—Loren made a big exit, while all VIP ticket-holders were urged to remain seated. We were going to be escorted onto the stage one by one in order to have our pictures taken with Loren. They set it up with a backdrop shielding her from us and brought in pro lighting.

As we filed up to meet our destiny, we were told we had no choice but to use hand sanitizer:

We were also relieved of anything in our clutches to cut down on the possibility of asking Loren for an autograph. I sort of get that for the sake of time, but one pretty ungracious thing that happened is a fan shouted out from the audience, asking Loren to sign her cookbook. Loren agreed, and the woman came up, hovering near the stage. She was never brought up, and during the VIP encounter, she paced the stage forever—but went away empty-handed. I don't love that she asked for an autograph at a Q&A (someone always does), but don't say yes and then say no.

My moment with Sophia was brief. I shook her hand (I wasn't sanitized for nothing!) and just thanked her for doing the talk. Then we smiled—the photographer took only one snap, which made me nervous. (With good reason—she had her eyes closed in quite a few of the, again, $400 VIP photos!)

Since I couldn't get an autograph in the end, I sprang for a signed poster, asking the guy how he knew they were legit. He told me he'd watched her sign them. Good enough.

Once the photos were taken, everyone was supposed to attend a little cocktail party, which consisted of alcohol and pretzels or popcorn at the opposite end of the theater in very dim lighting. I had thought we would get our images emailed to us, but turns out they were printing them all on the spot. This took hours. I spent some time chatting up two really sweet guys, big-time fans who turned out also to have an interest in Madonna (one had my book!). They had better gossip on Sophia than Sophia did.

I eventually had to leave, so I gave the photographer my info. But as I was leaving, I started piecing things together—Sophia had never been to the venue before, and I saw her arrive around 7:40 p.m. for the 8 p.m. show. There had already been signed posters in the lobby—so she couldn't have signed them upon arrival. Mine had to be fake. I saw the employee who had sworn she'd signed them all and caught him offguard by asking him when he'd seen her sign them. He was rattled. He said he'd seen her sign some when she got there. When I pointed out the posters were already for sale by then, he hemmed and hawed and said he'd seen her sign some, but couldn't be sure which ones.

So I think the posters were blatantly faked. I wrote an email to complain about that, and we'll see what happens. UPDATE: “I received this info from the St. George, which directly contradicts what the employee told me: Thank you for your email. The autographed posters are indeed authentic, as they were signed by Ms. Loren in advance and brought to the venue hours before she arrived by her management.”

The most pleasant surprisew as that the photographer emailed me my picture within a couple of hours of my departure, which was nice: In spite of the bumpiness of an event not exactly fit for a queen, I wound up looking at the evening in the way I told one of the guards it had to be looked at. He was saying it was crazy of anyone to spend $400 on Sophia Loren. I said, “It's only crazy if you don't care. But if you really want a picture with a living legend, and this is probably your last shot at getting it, it would be crazy not to pay it.” 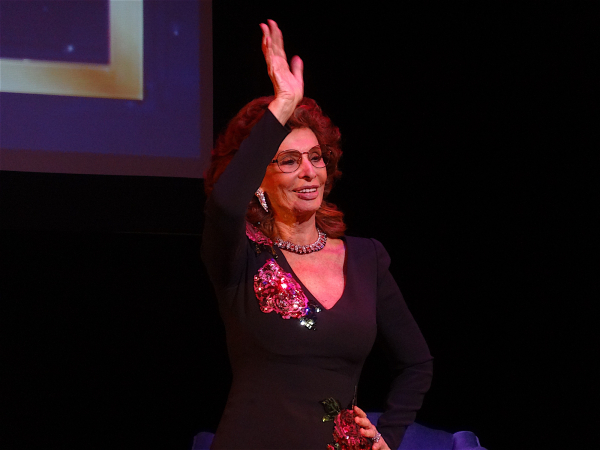