James Comey's last-second attempt to swing the election away from Hillary Clinton is unprecedented—and now we know that along with violating FBI guidelines, he also disregarded the advice of his boss, A.G. Roberta Lynch, in deciding to comment publicly on the newly discovered emails.

The media has already walked back initial reporting that the investigation into Hillary's private server had been re-opened, and now comes word that Comey's actions are in striking contrast to the precedents in place to avoid unduly swaying elections.

I don't know if Comey is just being ridiculously partisan OR if he just feels pressured to appear neutral (a wag the dog situation if ever there was one), but his actions throughout the case have the appearance of being partisan.

Damn, President Obama, why did you need a Republican hack in your administration? The Republicans don't pick Democrats to appear fair. 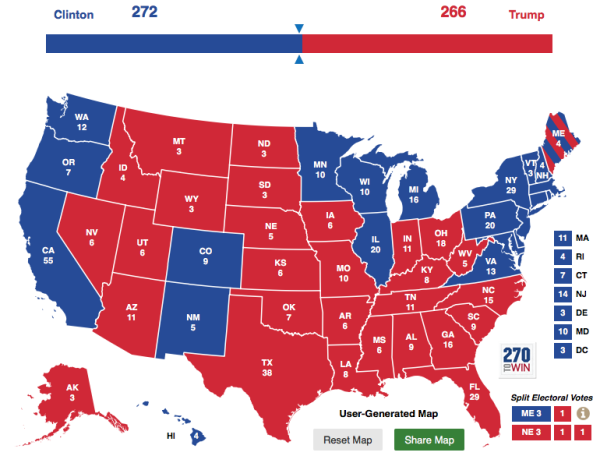 When Hillary is president, I'm hopeful she will avoid all Republicans in her ranks. The reason I continue to believe she'll be elected, aside from the unfortunate but I would argue not-explosive email news of yesterday and aside from the tightening polls (a new national poll gives her a mere 2-point advantage), is that I think she has a solid firewall of 272 EVs. Anything can happen and we must all vote, but I guess I'm saying that I would be shocked if she can't get to 272 EVs (she needs 270). She gets to 272 without Ohio, Florida, North Carolina, Nevada, Iowa—and does anybody really believe that she won't win any of those anyway?

To get to 272, I really don't include any shaky states in her column, but aside from the swing states mentioned, there are other states she could very well win, like Arizona (it could happen), Texas (it probably won't), Georgia (again, unlikely).