In NYC, Cher Sings Hillary's Praises, Says BIG PUSSY Trump Has NO SYMPATHY, NO EMPATHY, NO HUMANITY, Warns We Will Be Unsafe If He Wins Comments (0) 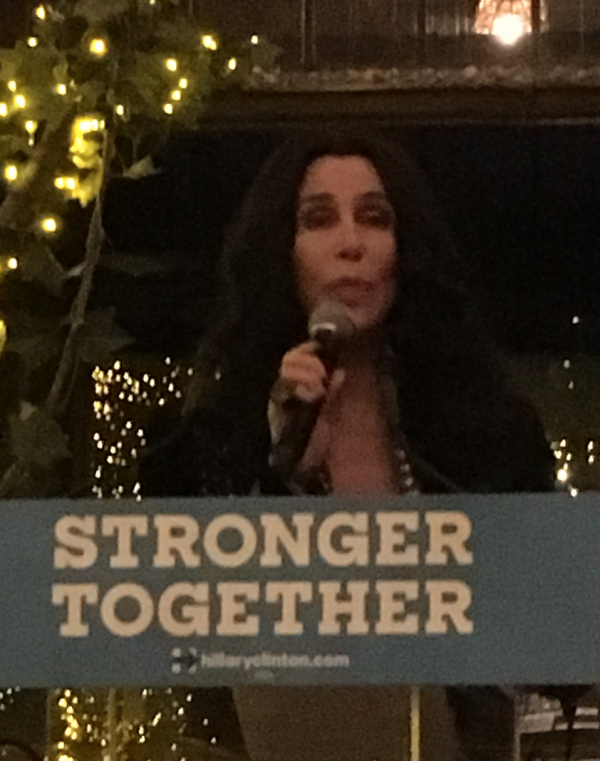 I was pissed off when I missed my chance to get a pic-with alongside Cher earlier this year—the unpredictable diva did several meet-and-greet events nearby (Fire Island, for one), but none that worked for me. So I was thrilled when the Hillary campaign announced a new set of events—including one right in Chelsea: Cher is Strong Enough for Hillary in NYC. Thanks to Ben Ryan and Jeff Campagna and all the other chairs, it turned out to be a dream-come-true kind of event.

For $250, you got to share air with Cher, for $1,000 you got a pic-with and I'm sure people paid even more for a private reception, all worth it to help Hillary become president and to help ourselves to some face-time with Cher.

I polled Facebook to figure out what I should wear. I had bought a fake leather (Nasty Pig!) shirt that I thought looked good on me, and that would be very Cher, but I also had a more ME polo. Then there was a sleek black Hillary tee.

People liked the tee the best, but I stuck with my gut (and I'm sure my eventual pic-with will reveal said gut) because I wanted to try something new. I even left the house with stubble! Gasp. (Hey, once I'm totally bald, I'll need options.)

The event was held at The Park on 10th Avenue, which has lighted trees inside and so little other light you could mistake Cher for me, so it had a nice, romantic, upscale-NYC vibe. I hovered near the front, where it was obvious Cher would eventually speak. I was behind a cool chick and her crispy friend (in a cute way), who was angry when he thought I was asking him to take my picture with Cher (since he knew I was getting one anyway!). They were sweet, and they unwittingly held my spot for me when, 45 minutes late, those of us getting pic-withs were called into the receiption area to form a line.

Some queens who'd just met her were talking about her vampiric agelessness, suggesting they'd had long moments to drink it in, and it soon became clear from the slow line that she was taking her sweet time with each person. Right when I got to the door, before stepping into Cher's presence, the handler was saying they needed a better puller because people were taking too long. I said, “Not yet!” and he snapped, “No. We do.” Bad timing ... but they didn't get around to it until I was done, haha. 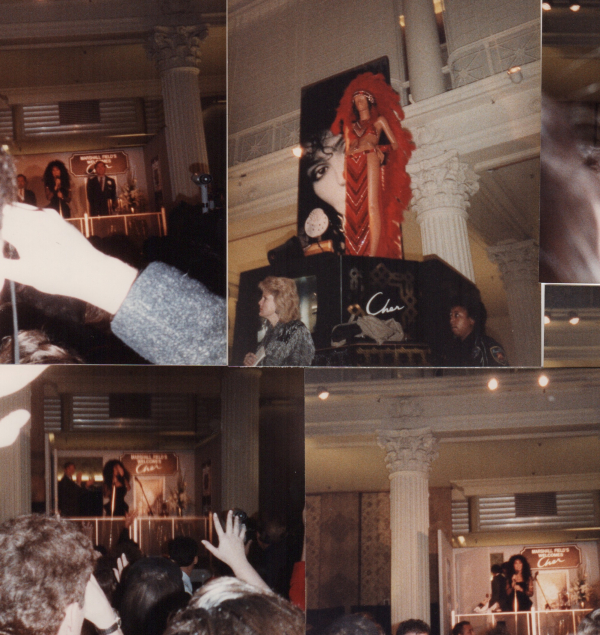 When it was my turn, I approached Cher, who was luminous under black hair, in a black, cleavage-baring outfit and black accessories (and so tall). I told her I'd been at a Marshall Field's event for her perfume Uninhibited 28 years ago and had been able to ask her a question, which I'd thought was going to be my ultimate Cher moment. (At the event, I asked her what she thought of tabloids, to which she replied, “Just look at the pictures.” I also sent up a tube with her “Skin Deep” 45 sleeve in it and my address and the bitch sent it back to me autographed within days!!! Ah, the '80s.)

“But this is better,” I said, emphasizing how lovely it was to pose for a picture with her. Cher replied, “Well ... yeah!” She then leaned in, pushing her hair in my face, and said, “And I still smell exactly the same—smell me!”

It was, indeed, Uninhibited. Or a reasonable facsimile. Or I just think that's what it smelled like.

I got beside her and two snaps went off before I was ready, but Cher must've felt the same because she asked for a third and pressed her head right against mine. It was so warm of her to do that. I hope I don't look utterly terrified. In pleather.

I thanked her for doing her Hillary tour and went directly back to my front-stage spot, while everyone else was shooed over to the side.

It took her a good 30 minutes more to do the other photos, but she was finally introduced hilariously by an elected official (who noted her use of the toilet emjoi for Trump and suggested it might also be used to represent Comey, Christie, Thiel and Giuliani) and then strode out onto her short catwalk and stood behind a lucite lectern with STRONGER TOGETHER emblazoned on the front of it.

Cher spoke with no notes for about 20 minutes. Here are the highlights (all transcribed by me—please provide link and credit if used anywhere):

On her right to speak up and her empathy for the poor:

Mostly Trump supporters and usually Republicans say, you know, “Libtard, you have no idea what's going on, you have no right to have a voice, just vote and shut up.” And if you read my Twitter, sometimes I'm very pleasant. And sometimes not so much ... I understand shame and I understand poverty. My grandmother picked cotton, my mother when she was 8 years old helped support her family by singing on bartops ... We were poor for the most part, really poor for the most part, but then my mother did marry this really rich guy and we moved to Beverly Hills and it was like the Clampetts. Okay? And I realized that rich is better.

Relating her dyslexia to being simpatico with LGBTQ people:

Which part of Trump's payroll is he on?

Being triggered by Donald Trump:

Donald Trump just comes to my mind and it's just like, I drama-queen out—I'm not kidding. I tried really hard not to say horrible things about him, but I can't help myself ... He doesn't mean, “Let's make America great again,” he means, “Let's make America straight and white again.”

On someone saying they'd leave their state if Trump wins:

Fuck the state—I'm gonna have to leave the planet.

The dire straits in which we will be if Trump pulls off a dark-miraculous win:

These people can't be in a position of power because I tell you, no one will be safe. And I know this from personal experience. And I would tell you my complete experience with these people, but I got death threats for days and so as much as I would like to go into it because I'm really pissed and I want you to know, I just want you to know we will not be safe with them. This is not a bullshit-get-out-the-vote-I-wanna-make-you-angry-and-nervous, this is I-swear-to-God-on-my-life ... I tweeted, like, kind of innocently—or as innocently as I tweet—so, but I mean I didn't expect it. The avalanche of death threats—it was frightening.

Somehow, from this elite bastard, they think that he's thinking about them, that he's gonna do something for them, I believe that each person has this wish and somehow they project onto him the ability to see them individually and to do it, to fix it, to care about them. This guy has no sympathy, no empathy, no humanity.

I don't think Kennedy or Lincoln would be wasting their time tweeting Cher.

I think one-on-one, he's a big pussy. He is one, he grabs one ... I don't understand how women—any woman—does not see [his misogyny] as a game-changer, you know? ... He sees us as body parts, he doesn't see us as people, he just sees us as, “Oh, look at the legs! Oh, look at the tits!” ... He doesn't see us as real human beings; we're just put here to make his life more fun.

How Cher's mom summed up Trump to Cher:

Trump is nothing ... The bigger the lie, the better the chance you have of getting away with it ... If you tell a lie long enough, it becomes the truth to most people.

How Cher sums up Trump:

His character ... like, if he was a young person, I would be very sympathetic and think, “You know, his life must've been so terrible and I feel so sorry for him in a way,” ... but he's a grown-up, so fuck him.

The decades of attacks on Hillary that have scarred her:

[Republicans have] managed to villainize Hillary to filth. You know? ... Even from the time that she and Bill got into office, it's been that. It's like they knew she was going to be running 30 years later and just thought, “We'll just kick this chick's ass now and just keep it going.”

The bottom line on Hillary:

I can't back every play, but I know a good person ... She's tough, she's tough as nails—wouldn't wanna fight her in a truck, okay? But she can do this job. She will go there every day, she will be there, she will try her best.