Who's That Guy?: An Exclusive Q&A With Madonna-Themed EMMY AND THE BREAKFAST CLUB's Creator, Guy Guido Comments (0) 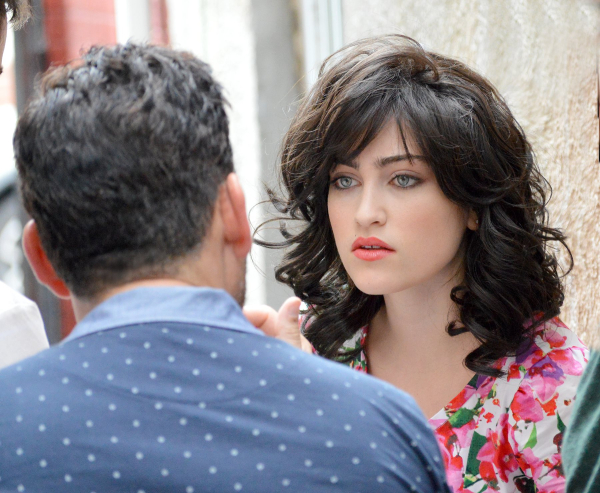 If you're a Madonna fan, you've probably read about the upcoming Emmy and the Breakfast Club, a documentary that promises to air unheard songs performed by Madonna 35 years ago when she was involved with Dan Gilroy and living with him in an abandoned synagogue in Queens. 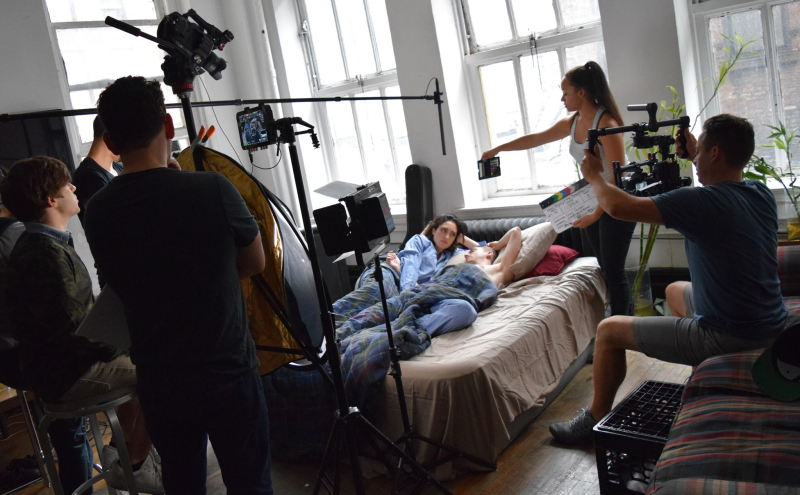 In bed with “Madonna & Dan” (Image by HeyMrJason Photography)

The movie is the second Madonna-themed effort for filmmaker Guy Guido, whose Physical Attraction followed a young man's coming-out story as he pursued some face time with a rising downtown-NYC star named ... you know her name. 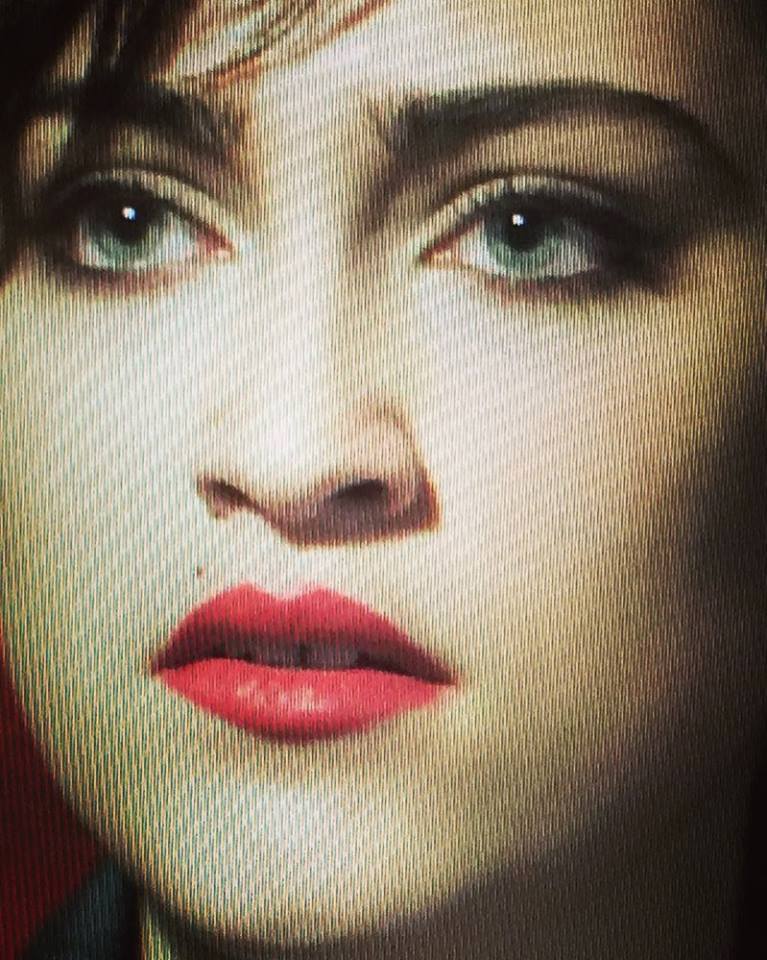 Keep reading for my full interview with Guy Guido ...

Boy Culture: Emmy and the Breakfast Club is your second Madonna project—what is the source of your interest in Madonna?

Guy Guido: I have been fan of Madonna from the first time I saw her perform at a small suburban night

club called Images [pictured] on Long Island back in 1983. She was something otherworldly to me ... I was mesmerized by her beauty, her bravado and her unique street vibe.

BC: The New York Post made it seem like the project will be exploitative. How far from reality is that impression?

GG: I explained a lot more to the Post about the project, but they seemed to hone in on the words “bedroom” and “tape.” When I said to them that this is an “intimate” film, I meant that in the context that it is a smaller group of people with more detailed information about this specific time period.

I also said that I have a recording that Dan and Madonna had recorded of themselves in bed one morning ... just fun, playful, romantic bantering and some fun, silly, random thoughts and life discussions—nothing serious and nothing sexual! ... It seems like something gossipy and headline-worthy; not my film and not my intention.

BC: So, starting from scratch: What is your project and what do you hope to accomplish with it?

GG: I have always been fascinated with the how of Madonna’s beginning in the entertainment industry, and with the before-fame struggles and work that went into her pursuits. My initial efforts were to find out through firsthand accounts (some of which have been quickly glossed over in the past),what the years 1979-1982 really looked like in regard to what she was doing.

People in the past have alluded that she slept her way to the top or that they gave her her real start, etc., but I knew that you don't sleep your way into a four-decade-long career. No one can make a star of her caliber without that person having an unmatched work ethic, talent and discipline. No one made Madonna but Madonna herself.

After having interviewed people and explored all of this more deeply, that is what became crystal-clear to me. 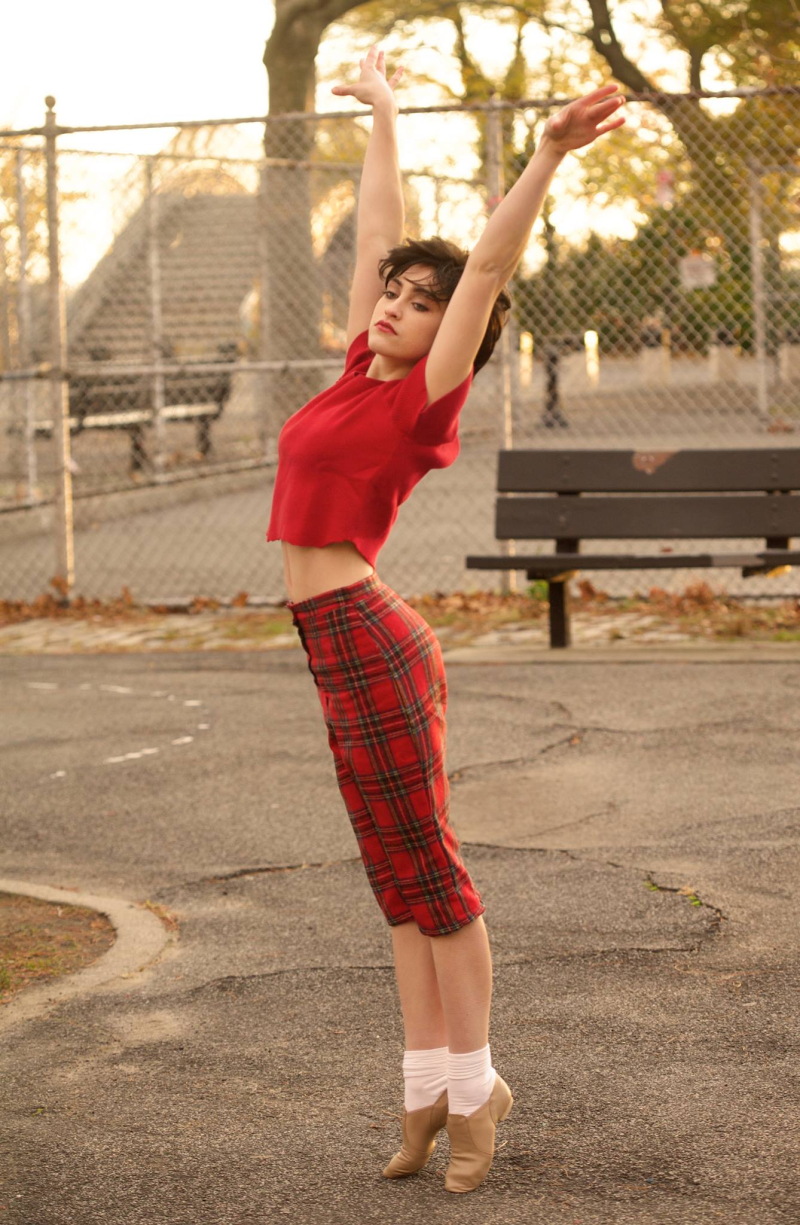 BC: Both Physical Attraction and your documentary focus on the very early part of Madonna’s career, which is often overlooked in favor of her breakthrough year (1985), or her arguable peak (1989-1991). What do you find interesting about the genesis of Madonna’s career?

GG: I think that because I saw her in person just before she was about to explode into the public’s consciousness, I feel that I got a glimpse of her raw, hungry state of being as a performer. When I first saw her, I can't imagine that she herself could have known the level of stardom that she would escalate to, so the very early years still interest me. Music and musicians are also very important in an adolescent’s life, so I probably also attribute my own coming-out and my own growth in self confidence to being an early fan of hers; I looked up to her as someone who was being herself no matter what anyone thought, and that gave me strength at an age when most teens need it.

In the '80s, a world before social media where we now know everything about celebrities (probably too much), we could only imagine what their real lives were like, and in my teenaged mind, Madonna walked around every day as the coolest person in the universe ... maybe not so far-fetched!

BC: Will your film have unseen photos and videos and unheard songs? Any tidbits you can share?

GG: Yes! We have some beautiful, never-before-seen photos and also some early original Breakfast Club music that has never been heard before.

BC: How did you get Dan Gilroy to be so forthcoming with materials he could have auctioned off or kept private forever?

GG: Dan Gilroy, as well as his brother Ed, have become friends and we have a great level of respect and trust for one another. That is all I would like to say in regard to that.

BC: What is Dan’s take on Madonna now? Still positive? Bittersweet? She thanked him in her Rock 'n' Roll Hall of Fame speech, but I’m sure she hasn’t been in touch...?

GG: In my opinion, Dan has nothing but great feelings for and memories of Madonna. It is a time in his life story that he looks upon with fondness. From what you will see in the film, they had such great times!

BC: What was it like meeting some of the people from Madonna’s early career—the Gilroys…who else?

GG: I have met lots of people from this time period in her life, but I am only using a select few in my film, as they are more relevant to the story that I am personally interested in. It has been an honor and extremely positive experience hanging out with Dan, Ed, Gary Burke and Norris Burroughs, to name some of them. 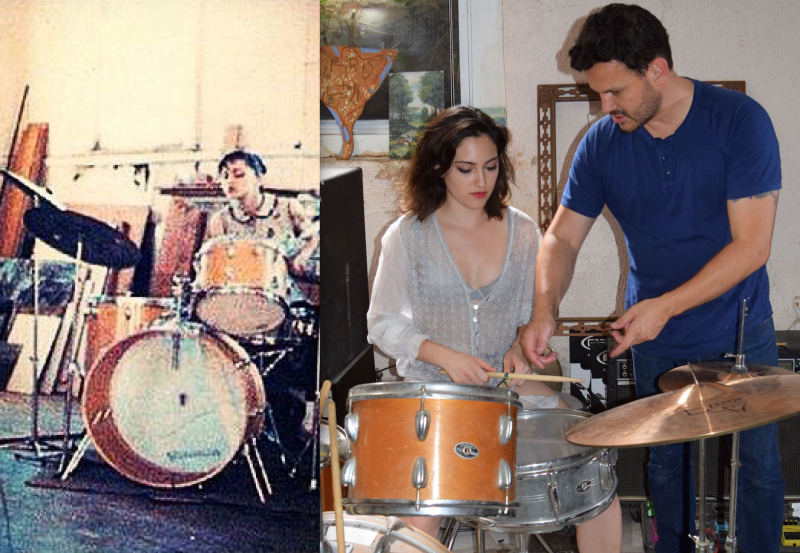 BC: What was it like going into the famous synagogue, where she lived and worked with the Gilroys?

GG: This was fascinating! I love history and I am very nostalgic. To see firsthand where this all happened was incredible. Ed Gilroy has been so generous with me, and to film things where they happened was a dream come true. It helped to make the reenactments eerily realistic! We even use her original drums and guitar in the film. 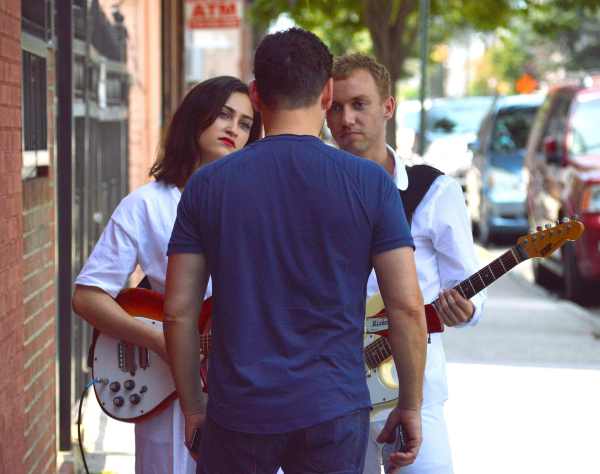 A reenactment of the days when Madonna and Dan would stroll the streets of Corona. (Image by HeyMrJason Photography)

BC: How did you go about casting “Madonna”—she’s another amazing look-alike.

GG: I had originally set out on the typical route of casting through talent agencies, but after some frustrations in that area, something wonderful happened ... I stumbled upon a young girl working in a doughnut store in Chelsea ... who, through my eyes, had the most striking resemblance to Madonna. I didn’t approach her right away, but her face kept poking at my mind and eventually I spoke to her. 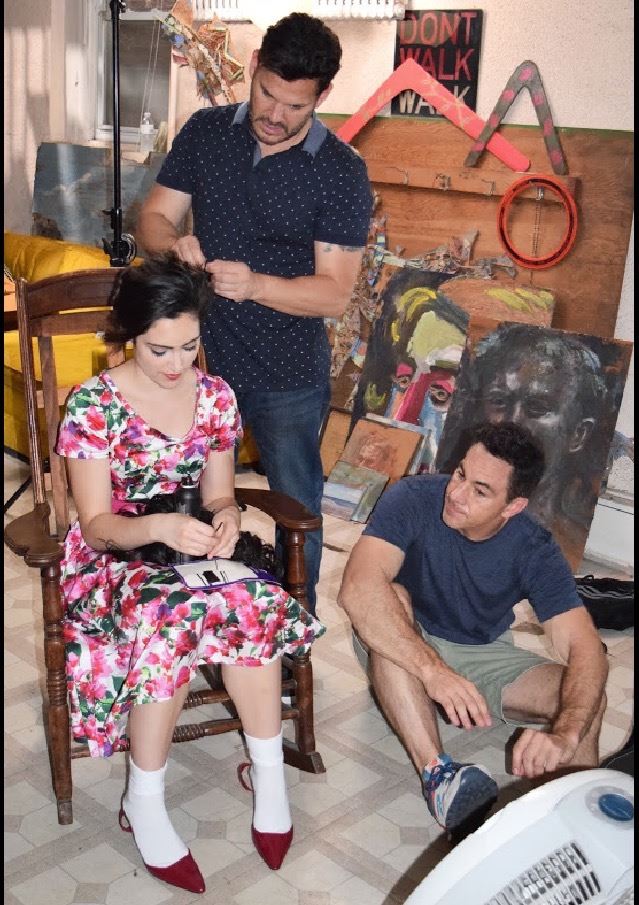 Guido is a hands-on director — here, he does his lead actress's hair for a scene. (Image by HeyMrJason Photography)

With something like this, I knew how important it would be to viewers and fans that the look was as perfect and realistic as possible. Let’s face it, Madonna has a very unique beauty and it is not easy to find a face like that, especially with the right body type and age range to match the time period of this story.

I realize that saying I found her working in a doughnut store sounds made up, because the fans know that Madonna worked at a doughnut store, but I promise you this is 100% true! Lots of things with this project have been falling into place this way for me. It is like the universe wants this to happen, that I am supposed to make this film.

BC: When Emmy and the Breakfast Club is finished, where do you envision showing it—film fests, getting a distributor for a theatrical release, or maybe pitching to TV?

GG: I am always an optimist in my life and I have the highest hopes for the film, but my first priority is finishing up production and then deciding on the best distribution situation that suits the project and will make it available to the widest audience.

BC: What’s your timeline for completion?

BC: How did you branch out into filmmaking—isn’t your specialty grooming? (And who have you worked with—tell.)

GG: I graduated NYU with a BFA in film in ’97, but I do have a first career in hair and makeup, which has paid my bills, but also comes in handy in all of my projects. I have been featured on major network talk TV doing makeovers and such, and don't get me wrong, it is fun and I am grateful for the skills, but it isn’t my passion. Telling stories is my passion! It does still come in handy, though, and I will admit that I am the hair and makeup person for our lead actress, Jamie Auld, because I wouldn't trust anyone else to create Madonna's look for this. 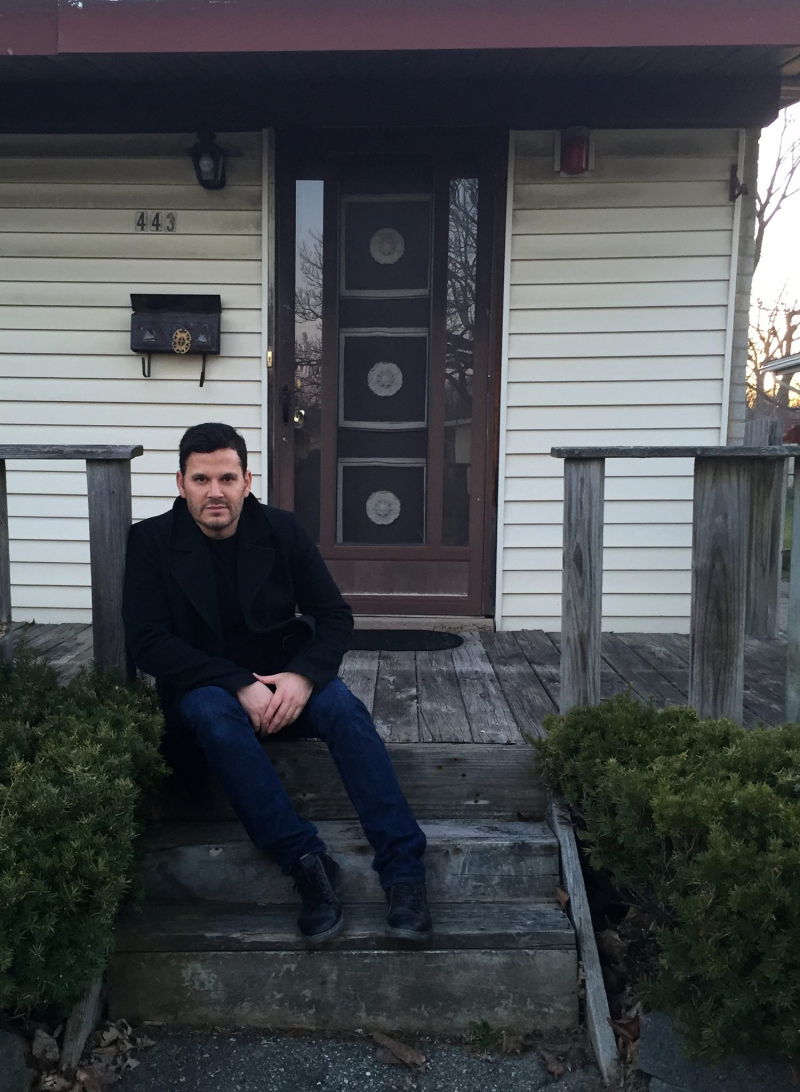 Guido at the home in which Madonna first lived — yes, viewers will get to see inside in the film (Image courtesy of Guy Guido)

BC: What’s your budget, or can you speak of some of the challenges of putting together a boutique film and making it look expensive?

GG: Our budget, like most documentaries, is small. However, I have a very talented team, like producer Paul Castro and cinematographer Jason Montalvo, who has been with me from day one on this project.

With today’s technology, it is more realistic to be able to make a feature film that can compete with bigger-budgeted projects as far as production value, but it all comes down to passion. Like any form of art, whether it be a film, a book, or a painting, the work is only going to be as good as the passion within the person behind it. There is no way I could have even attempted this without the extreme passion that I have for this story and subject matter. 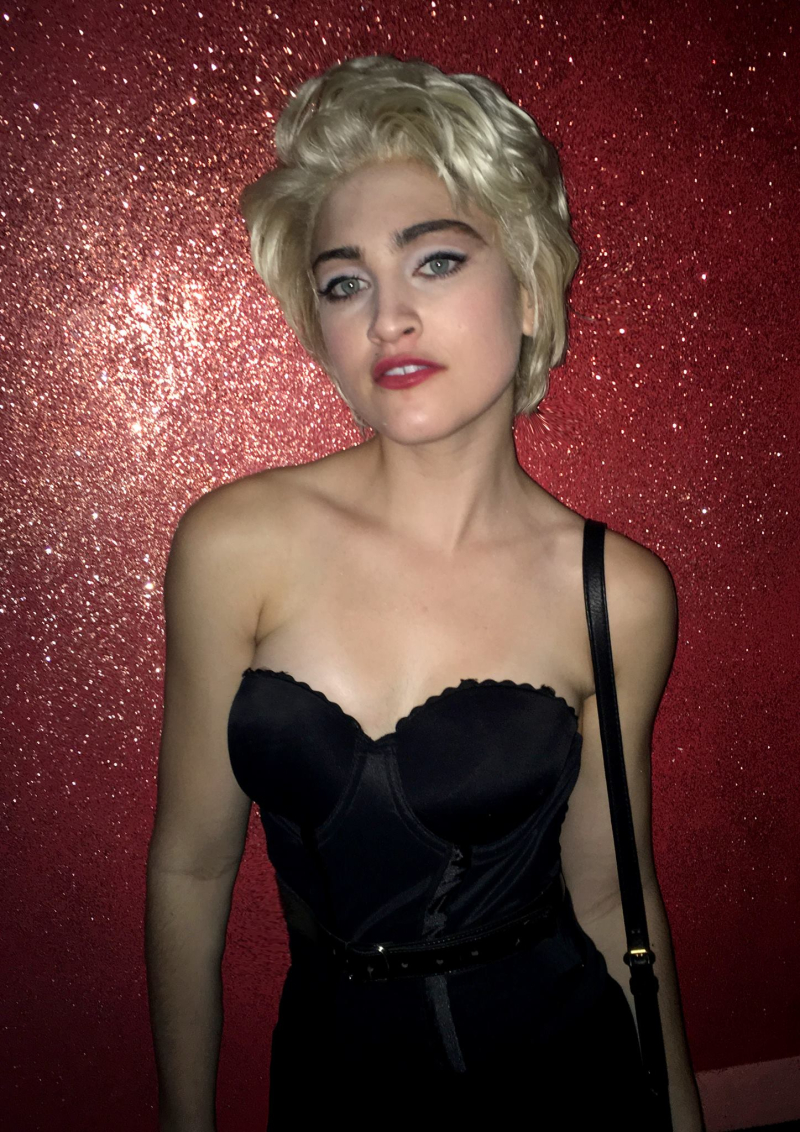 It is my hope that the audience for this film with see that, and that they will learn something new and interesting about Madonna, the people who were around her, and this time in music history. Whether you are a fan or not, you will have a newfound appreciation and respect for the way Madonna worked her way into the music business with blood, sweat, tears and, ultimately, determination.

Not that there will ever be another Madonna, but in today's world, where people feel entitled to fame based on selfies and social media posts, this should be a true inspiration to all.