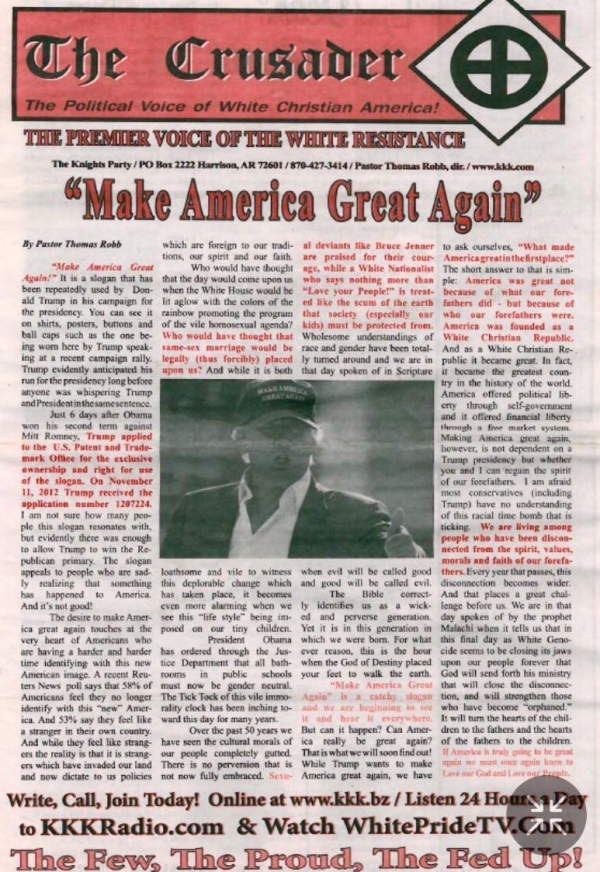 Trump dog-whistles to racists, then his campaign makes a show of denouncing their endorsement. (Image via The Crusader)

People talk about Hillary Clinton being establishment and even being shady/corrupt—I disagree emphatically that she is the latter.

Wanna catch Hillary doing wrong? Go for it. Once she's in office and the Democrats are in control. Catch her doing wrong? I'll be surprised and sad. But again, Democrats will be in office.

A historically black church in Mississippi was burned and what remained was "Vote Trump" spray painted on the side. https://t.co/H3yxyy2mMO

Donald Trump is not even in Hillary Clinton's orbit when it comes to doing good, caring about people and yes, following the rules. He must be stopped. The only way is to vote against him. The only vote that will make a difference against him is for Clinton—William Weld gets that—even if it's in the short run and you wanna go back to hating, criticizing, attacking her right after.

Bill Weld: “She deserves to have people vouch for her other than members of the DNC, I’m here to do that” https://t.co/HkWkthQSKg #ImWithHer pic.twitter.com/RofdsXRKjz

I've never understood how anyone could hate Obama. Never. I have always understood how someone could hate Hillary; I disagree with it, but I get a lot of it. But I think so much of it, which allegedly about her behavior, is either entirely because of who she is, or is exacerbated by who she is—her persona, her demeanor and her gender. Whatever the mix, people who rage against her often think they're raging against her record, but it quickly becomes obvious it is about her, that nasty woman.

Man shouts at press for selling out "for a few shekels" at Trump rally in Miami pic.twitter.com/f4MApeMgxa

The same is true of Trump at times—he's such a dick, so self-aggrandizing and smug. But if you remove their personae from the equation—admittedly hard to do—you're left with a highly political person with some potential ethics issues and a complete incompetent with zero understanding of how the system or the world works, who seems enamored of Russia and whose views on race and the economy are disastrous.

I feel like the U.S.A. has never been closer to being a failed experiment—I'm just holding out hope for a positive result in six days.