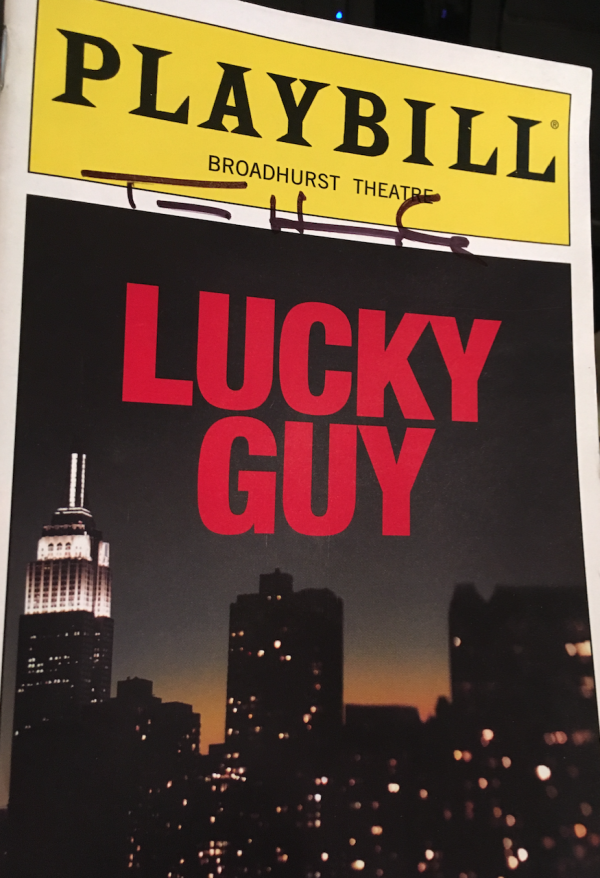 I recently wrote about something unusual that happened regarding my autograph-collecting hobby.

When I see plays, I tend to be too lazy to hang out and stage-door the stars, unless it's someone I really want to nab/would be extra-thrilled to meet in person. For example, the cast of Other Desert Cities in 2012 was irresistible, and I loved getting to meet Stockard Channing, Judith Light, Rachel Griffiths and Justin Kirk—who wouldn't?! I also had to stick around after the show when I saw the horrendous Deuce, if only to see Angela Lansbury and Marian Seldes, and was pleasantly surprised to see Celeste Holm, too.

When I saw Lucky Guy three years ago, I would've been excited to get a pic with Peter Scolari and Tom Hanks—Bosom Buddies was one of my favorite TV shows ever—but I couldn't brave the huge crowds, so I mailed my two programs to the theater in care of Scolari, assuming he'd be more likely to reply. I actually get back, signed, more than half of the Playbills I send, so don't scoff!

I never heard back ... until last week, when I received my three-year-old Playbills back in the mail from Scolari, who is in Wicked at the moment. I was floored! He signed one and kindly wrote a note instructing me where to try Tom.

I promptly mailed my Playbill to Tom at his office, assuming I'd never hear back. In my note, I wrote about the comically long wait I'd had for Peter's signature and joked that I hoped to hear from Tom “before Hillary Clinton is about to clinch her SECOND TERM. haha”. As one final joke, I noted that I had enclosed an SASE, and that “millennials have no idea what that means.”

Would you believe I mailed it 10/27 and received it back signed 11/4 from California?

Even better, not only did Tom sign my Playbill, he returned my typed letter with the haha underlined and a note on my millennial comment: “Idiots!” (I'm sure he meant it affectionately, as did I.) That, too, was signed.

I definitely felt like a lucky guy to hear back from someone busy winning Oscars.