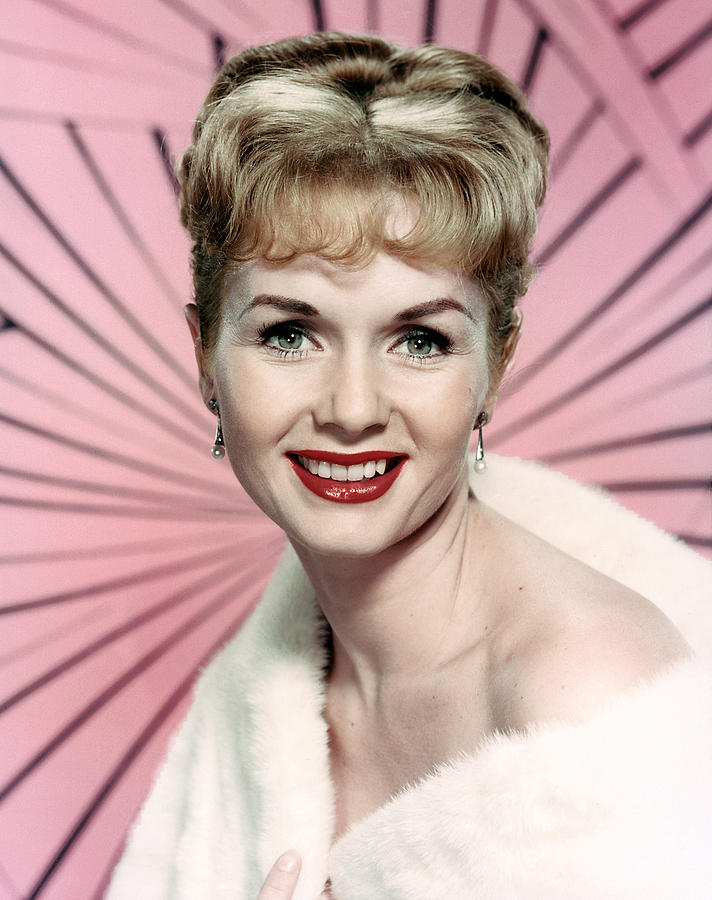 Just over 24 hours after the death of her beloved daughter Carrie Fisher (1956-2016), the incomparable Debbie Reynolds has died at 84, TMZ reports. Earlier today, Reynolds had been rushed to the hospital via ambulance after a possible stroke suffered while discussing the funeral arrangements for Carrie. According to TMZ, which had a direct line to Debbie's son Todd (b. 1958), Debbie had said — just 15 minutes prior to her stroke — that she missed and longed to be with Carrie.

Ironically, mother and daughter are starring in the soon-to-be-released documentary Bright Lights: Starring Carrie Fisher and Debbie Reynolds (2016), which I was privileged to see with Carrie onstage and Debbie on the phone less than three months ago. The modern twist on Grey Gardens (1975) was already a must-see ... now, how could you miss it?

Debbie Reynolds, who had been one of the last of a handful of top-tier stars active during the Golden Age of Hollywood, got her big break in Three Little Words (1950) as a teenager playing “I Wanna Be Loved by You” songstress Helen Kane (1904-1966).

That film was released the same year as the big hit Two Weeks with Love, a romantic trifle co-starring Carleton Carpenter (b. 1926) that contained the classic duet “Aba Daba Honeymoon,” the popularity of which propelled the pair onto a vaudeville tour to promote the film. 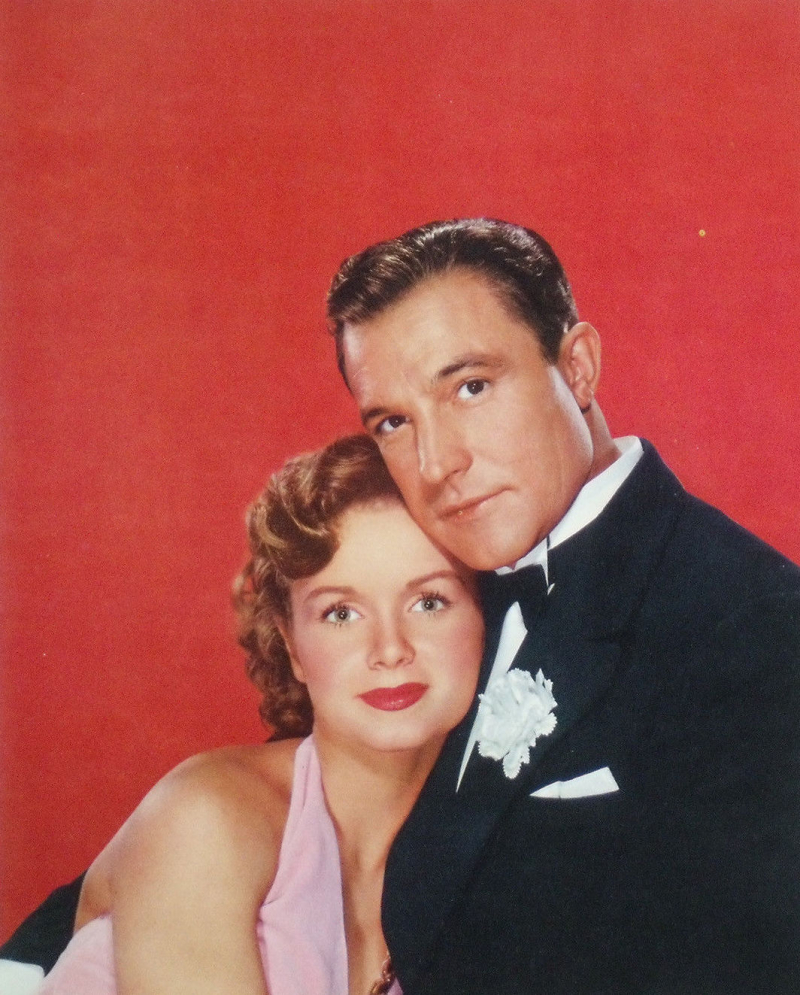 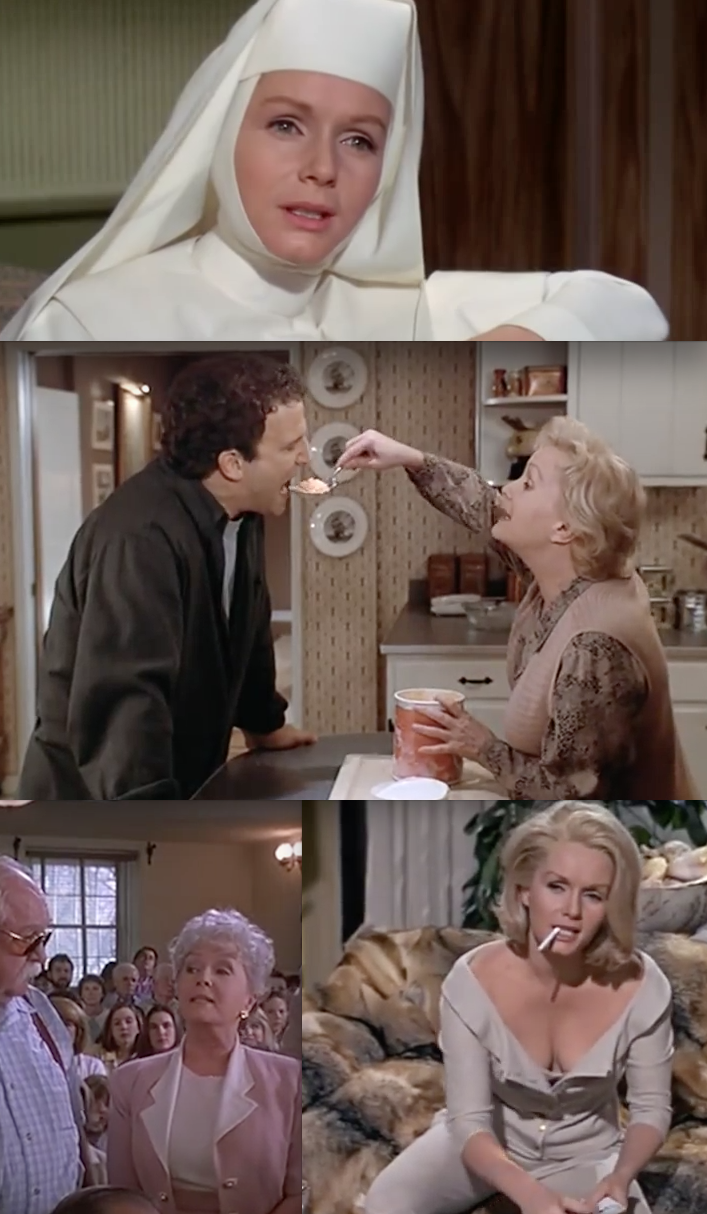 For decades to come, she would be a cheerful ambassador for the movie, helping to keep its legacy alive. In the film, she was dubbed by Betty Noyes (1912-1987), which was ironic since the plot was about the foibles of the transition from the Silent Era to the age of talkies, and included Debbie's character secretly dubbing the singing voice of the vocally challenged character played by Jean Hagen (1923-1977). 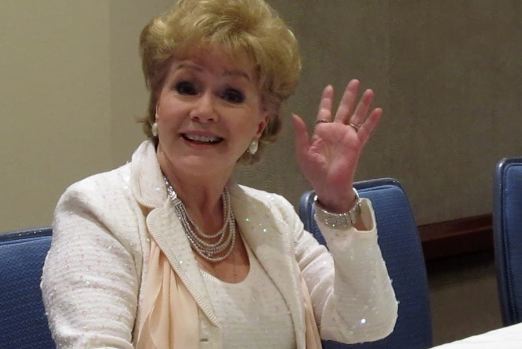 Debbie in 2012 (Image by Matthew Rettenmund)

In 1973, Reynolds was the voice of that wise, wonderful spider in the indelible animated children's classic Charlotte's Web. [A later generation of youngsters will remember Reynolds for her appearances in the Disney Channel Halloweentown films (1998-2006).]

Along with a winning, Emmy-nominated role on Will & Grace (1999-2006) as Debra Messing's (b. 1968) mother, Reynolds experienced a career revival in the 1996 Albert Brooks (b. 1947) film Mother, in which her performance as the type of mother who really did a number on her son had been thought to be a surefire contender for an Oscar nomination; alas, she was overlooked in a crowded year. She would go on to give one more tour de force performance on film before her death, knocking it out of the park in a too-small part as Liberace's mother in the HBO film Behind the Candelabra (2013).

Over the years, Reynolds, who excelled at light comedy, was nominated for four Golden Globe Awards for her films, was honored by the National Board of Review for her supporting performance in The Catered Affair (1956) and would go on to receive both the prestigious SAG Lifetime Achievement Award and a 2015 Jean Hersholt Humanitarian Oscar, the latter of which she accepted on video just this year.

Reynolds performed onstage for decades, giving them the old razzle-dazzle in her sequined gowns and blonde wigs in a way that only a true old-time Hollywood star could. Her indefatigable presence kept her working right into the early part of this decade. Perhaps her biggest accomplishment onstage was on Broadway in Irene (1973), for which she was Tony-nominated. [Her co-star in that show, George S. Irving (1922-2016), who won a Tony for it, died this month as well.]

Speaking of Debbie's impact as a live performer: I went with my ex-partner to see Debbie at Café Carlyle in 2009, and it is one of my most treasured memories. Because I have stones, I videoed some of it, and I'm glad I did! I captured Debbie teasing the two of us for being obviously gay and not caring about her one good leg:

I also captured Debbie singing “my only hit”:

So ... if ever you get a chance to see a legend, take it; as it turns out, they do not last forever. 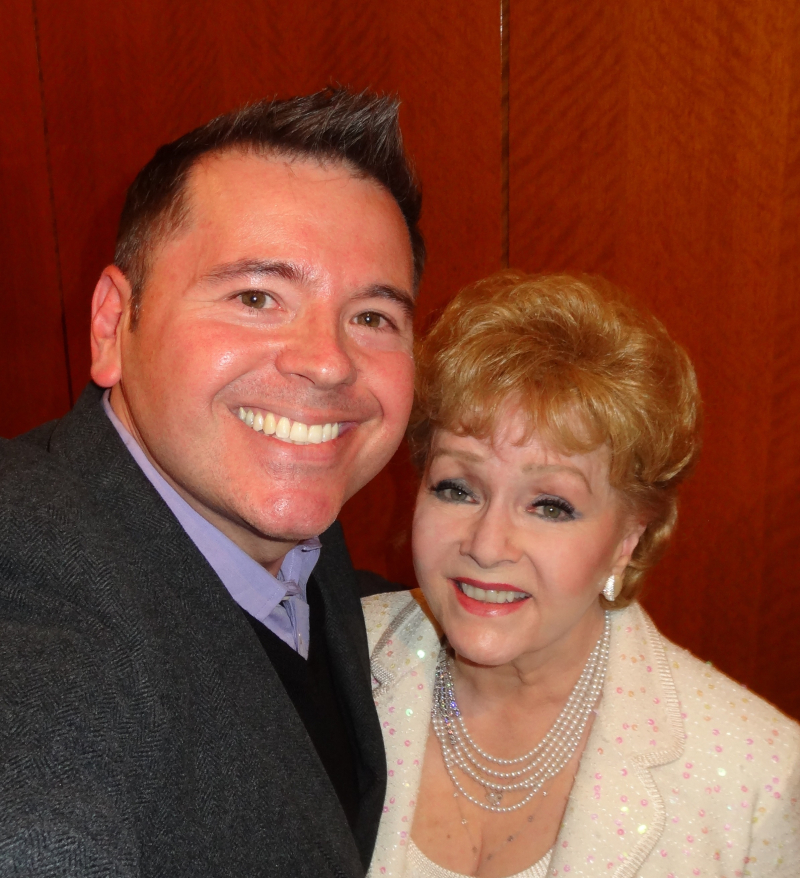 I had to work hard for this selfie at Cinecon. She was a doll! (Image by Matthew Rettenmund)

I was ecstatic to actually meet Debbie Reynolds in 2012 at Cinecon in L.A., where she was honored for her amazing career and gave an incredible, witty, somewhat blue, stream-of-consciousness speech about her life and her work:

Speaking of her life, for a glamorous movie star, Debbie Reynolds had a relatively hard time of it. Carrie described her mother as the Jennifer Aniston of her era, but certainly Aniston would be unlikely to envy her predecessor. Madly in love with husband Eddie Fisher (1928-2010), by whom she had Carrie and her son Todd, Debbie was forced to endure the humiliation when Eddie left her for their good friend Elizabeth Taylor (1932-2011), then recently widowed. The scrutiny took a heavy toll on Reynolds, whose luck with men was famously lousy; she was married to gambling addict/businessman Harry Karl (1914-1982) from 1960 to 1973, during which time he drained her finances, and to real estate developer Richard Hamlett (b. 1936) from 1984 to 1996, during which time she claimed she feared he intended to kill her to collect on her life insurance. Me in 1991 with those infamous Absolutely Queer/Absolutely Het posters; Debbie lower left (Image by Matthew Rettenmund)

She was outed as a lesbian in the '90s, and would later state, “Everyone I dated was gay. Except for Robert Wagner.” Her daughter said of persistent rumors about Debbie's sexual orientation that she wasn't a lesbian, just “a really, really bad heterosexual.”

In 1970, Reynolds purchased scores of items at the legendary MGM auction of all its historical wardrobe and props. Her investment was wise, as movie memorabilia wasn't a hot commodity then. She added to her collection for decades, planning to put it 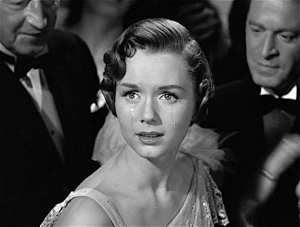 on permanent display in a museum or in her short-lived casino, but maintaining and insuring the priceless items destroyed her finances and let to three massive auctions via Profiles in History from 2011 to 2014. It is said Reynolds raised over $50 million from the sale, but parting with her beloved movie memorabilia and seeing her things scattered around the world instead of preserved sank her spirits. Among the items in her collection: Marilyn Monroe's (1926-1962) Seven Year Itch (1955) dress and one-of-a-kind items belonging to every major film star in movie history — including Elizabeth Taylor.

Many years after Taylor and Fisher split, Reynolds and Taylor patched things up, even working together in the campy TV film These Old Broads (2001), with Joan Collins (b. 1933) and Shirley MacLaine (b. 1934) — the latter of whom had played a thinly veiled version of Debbie in the 1990 film Postcards from the Edge, written by Carrie and also starring Meryl Streep (b. 1949).

If that doesn't prove what a trouper Debbie Reynolds was, what could?