During Billboard's Women in Music Awards, taped Friday for air Monday at 9 p.m. ET on Lifetime, Madonna was given a Woman of the Year Award (handed to her by Anderson Cooper), immediately following a souful rendition of “Like a Prayer” by Labrinth and a gospel choir. She liked the performance!

“I always feel better with something hard between my legs,” she Mae Wested while straddling her mic, before beginning.

She went on to deliver a powerful speech that kicked off with some feminism:

I stand before you as a doormat — oh, I mean a female entertainer... Thank you for acknowledging my ability to continue my career 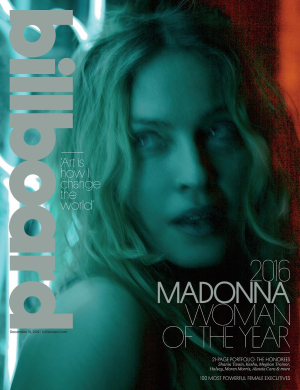 for 34 years in the face of blatant misogyny, sexism, constant bullying and relentless abuse. When I started, there was no Internet, so people had to say it to my face.

She name-checked the LGBTQ community early on in her speech:

There were very few people I had to “clap back at” because life was simpler there. People were just dying of AIDS everywhere, Manhattan was under the siege of a plague and it wasn't safe to be gay — it wasn't cool to be associated with the gay community.

She got deep discussing her formative years in NYC, which began in 1979:

In the first year, I was robbed at gunpoint, raped on a rooftop with a knife digging into my throat and I had my apartment broken into so many times I just stopped locking the door. In the years to follow, I lost almost every friend I had, to AIDS or drugs or gunshot. As you can imagine, all these unexpected events not only helped me become the daring woman that stands before you, but it also reminded me that I am vulnerable, and in life, there is no real safety except self-belief. And an understanding that I am not the owner of my talents — I'm not the owner of anything. Everything I have is a gift from God. And even the shitty, fucked-up things that happened to me, that still happen to me, are also gifts, to teach me lessons and make me stronger no matter how much I cry about it, I'm alone, no matter how much I ranta bout the unfairness of it all, I'll take any friend that'll listen.

She went on to say that she doesn't care about awards, but still wanted to use the moment to speak about being a woman, and a woman in the recording business.

She generously listed as influences Debbie Harry, Chrissie Hynde, Aretha Franklin and especially her “muse” David Bowie, who she says made her think there were no rules.

But I was wrong. There are no rules ... if you're a boy. If you're a girl, you have to play the game . What is that game? You are allowed to be pretty and cute and sexy, but don't act too smart, don't have an opinion, don't have an opinion that is out of line with the status quo. You are allowed to be objectified by men and dress like a slut, but don't own your sluttiness and do not, I repeat, do not, share your own sexual fantasies with the world. Be what men what you to be, but more importantly, be what women feel comfortable with you being around other men. And finally, do not age, because to age is a sin. You will be criticized, you will be vilified and you will definitely not be played on the radio.

Madonna remembered posing nude for art students, saying she recalls the media expecting her to be ashamed when the pics came out in 1985, saying people probably left her alone because she was “taken off the market” by Sean Penn. She also recalled being called a whore, a witch and like Satan during her Sex era even while Prince got to run around in provocative gear. She said this was when she fully got it that women and men were not the same in our society, period.

Her memory of that American Bandstand moment when she declared she wanted to rule the world was that she never planned to say that, but that her ego later understood:

...if you ask the universe for a lot, you're gonna get a lot — it just won't always be pleasant. So once you embrace and accept this universal law, you just might survive not only the entertainment business, not only the music business, but you must might survive this crazy thing called life ... People say that I'm so controversial, but I think the most controversial thing that I have ever done is to stick around.

Toward the end, she seemed to reference Donald Trump by stating:

She showed up to collect her award in a custom Gucci pantsuit, AFTER THE JUMP ...

I'm not in love with it. But it looks better on Instagram: 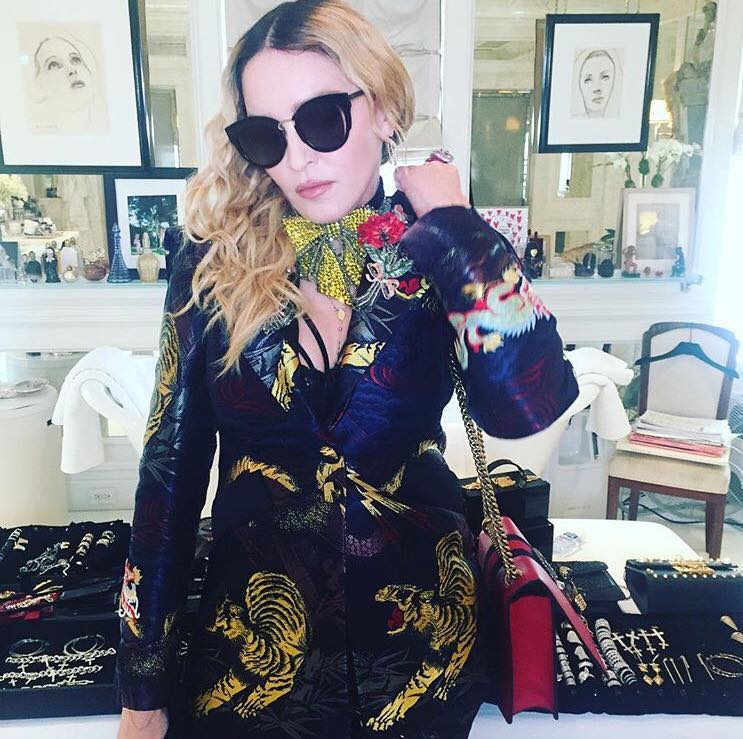