THE BRADY BUNCH's Susan Olsen Uses Anti-Gay Slurs When She's Mad — UPDATE: She Lost Her Job Over It Comments (0)

UPDATE: Susan seems to have lost her job over her hate speech.

I had not a clue that Susan Olsen of The Brady Bunch fame — cute li'l Cindy — was a Trump-supporting, Hillary-hating, Islamophobic spewer of right-wing bilge. That bothers me. But oh, well, it's a free country.

Still, when this person is also pretending to be a friend to the LGBTQ community and speaking very differently in private, that's some bullshit that needs to be exposed.

Leon Acord-Whiting (he of Old Dogs & New Tricks) criticized Olsen, an L.A. Talk Radio co-host, for spreading misinformation. Olsen did not take kindly to it, sending him this message, which he posted publicly: 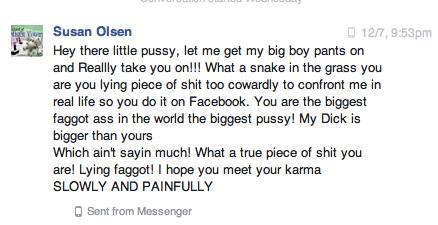 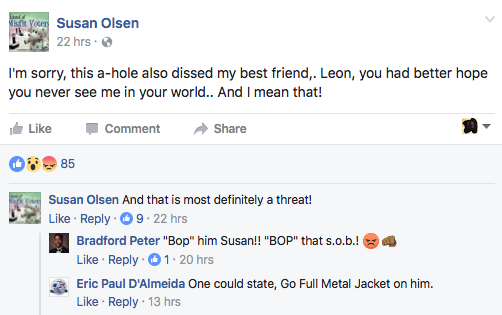 One of her gay friends defends her in the nasty thread, saying he knows what's in her heart, as if that means it's okay for her to slur people privately and (1) not apologize, (2) double down by making threats. See, because she has a friend who's gay and she's nice to him and hasn't called him a faggot, that means she can't possibly be what she, in fact, is.

Always so depressing to find out someone who you admire as an actor or, in this case, who was a small part of something you enjoyed is a POS.