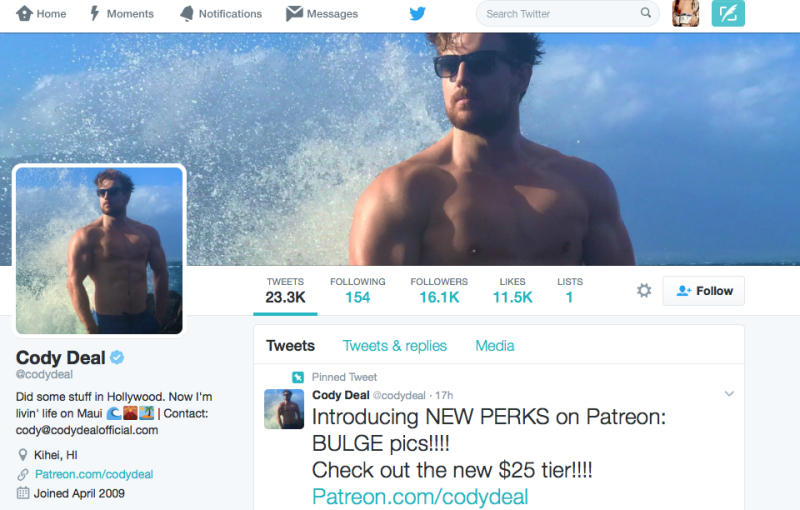 Cody is selling peeks at his bulge. Yawn. (Image via Twitter)

This week, he posted a very old shot of him meeting Donald Trump and noted he can now say he had a good conversation with a president. Along with the pic, he congratulated Trump.

Donald Trump campaigned, in part, on removing LGBTQ protections, he flip-flopped on the trans bathroom issue (winding up against trans people) and he has sworn to see gay marriage overturned at the Supreme Court. That last one is something his minions have already begun working on.

So not surprisingly, some of Cody's fans were angry. Here is the response that Cody loved so much he tweeted it back to several: 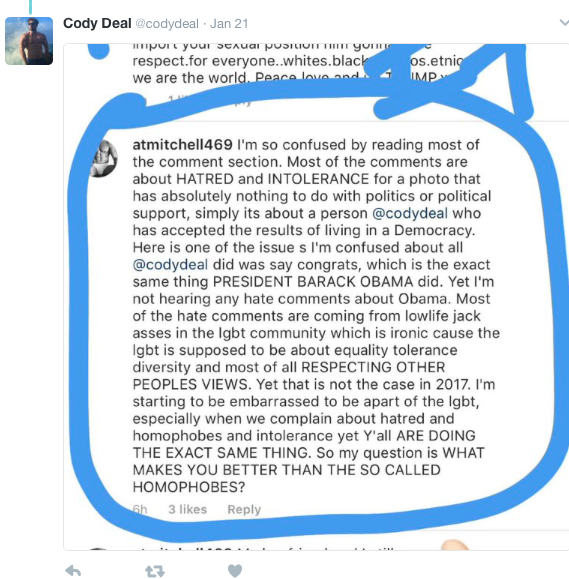 Cody's defender has almost no followers, is anonymous, claims to be gay. Mm-hm. (Image via Twitter)

That's right, even though he makes his living off of showing his body and, apparently now, his penis to gay men, Cody thinks this person's comment — which calls gay people lowlifes — is right on the money.

(1) Rejecting a wannabe-autocrat who is working hard to strip LGBTQ people of rights is not the same thing as homophobia, but it speaks volumes that this meathead thinks it is. Why wouldn't he? Nobody is coming for his rights.

(2) If gay men are “lowlifes,” what is a person whose living is made off of them? A sub-lowlife? A parasite?

(3) Fuck off, there are plenty of very hot guys who are actually LGBTQ or rock-solid allies. Cody Deal is pretty, but pretty is common. So, apparently, are stupidity, ignorance and disloyalty.

My Cody calendar is out of date by about 100 years now.