QUEER-er Eye For The Straight Guy?: Reboot Of Another Back-In-The-Gay Series Comments (0)

Way back in July 2003, when it debuted, Queer Eye for the Straight Guy felt pretty ballsy and 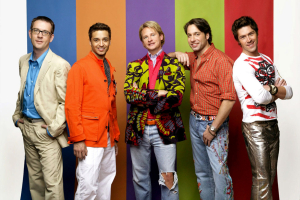 fabulous, at least to its fans (of which I was never one). It presented five unapologetically gay men as fashion experts, and teamed them up with hapless but game hetero dudes who just wanted to know how to look good.

It felt like a rare example of gay people on TV being accepted for their talents, even if it was also frustratingly filled with (humorous) stereotypes and not much sexuality.

Now, like Will & Grace, the series is being revived; it will be a Netflix joint.

Carson Kressley isn't wild about the idea, and neither am I — what felt cheeky in 2003 might just feel regressive in 2017, or could come off as trying too hard. But let's see what they do; maybe it will be sharp 'n' snazzy.