Via ExtraTV.com: Bill Paxton, the handsome, affable leading man who appeared in a string of Hollywood blockbusters in the '80s and '90s and was acclaimed for his performance on five seasons of HBO's Big Love, has died at 61.

According to a family statement, Paxton's unexpected death was the result of complications from surgery — what kind was not specified, but rumor has it he underwent heart surgery and suffered a fatall stroke.

The statement read, in part:

It is with heavy hearts we share the news that Bill Paxton has passed away," the family statement read. "A loving husband and father, Bill began his career in Hollywood working on films in the art department and went on to have an illustrious career spanning four decades as a beloved and prolific actor and filmmaker. Bill’s passion for the arts was felt by all who knew him, and his warmth and tireless energy were undeniable. We ask to please respect the family’s wish for privacy as they mourn the loss of their adored husband and father.

Paxton's death is all the more shocking because he just appeared at the People's Choice Awards in January and at the NAACP Image Awards on February 11,and appeared to be the picture of health.

Paxton began his career as a filmmaker, shooting and starring in the early-MTV music video “Fish Heads” for the creepy song by Barnes & Barnes, a short that appeared on Saturday Night Live in 19880. He also appeared in Pat Benatar's “Shadows of the Night” music video in 1982 as a Nazi, and in a later Limp Bizkit clip.

As an actor, his first movie credit was in the Bill Murray comedy Stripes (1981), and he had a small role in 1984's The Terminator. Thanks to the latter, he became the only actor to do battle with a Terminator, a Xenomorph (Aliens in 1986) and a Predator (Predator 2 in 1990).

A Simple Plan (1998), he is probably best-remembered for his role in Titanic (1997), then the highest-grossing movie of all time. He traveled to the actual Titanic with director James Cameron for 2003's Ghosts of the Abyss documentary. 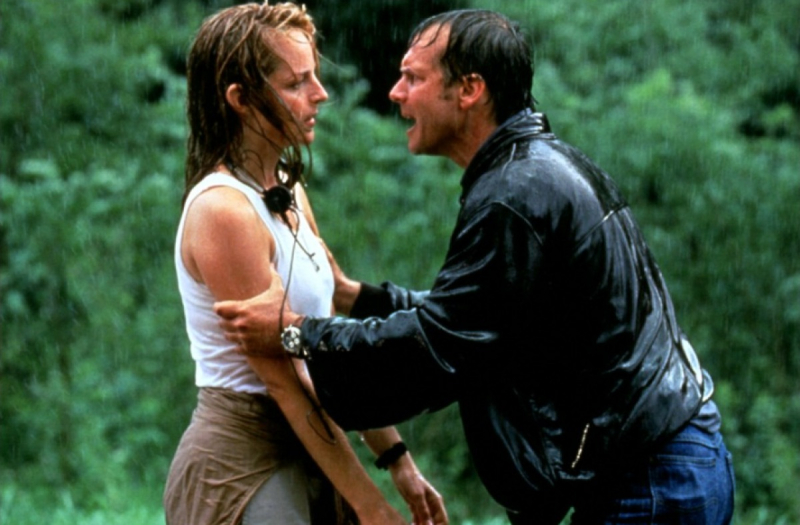 With Helen Hunt in Twister (Image via Universal)

Big Love was Paxton's crowning achievement on TV (and he was super hot in it — Work Unfriendly). Elsewhere on TV, Paxton was Emmy-nominated for Hatfields & McCoys (2012). He has also been nominated for SAG and Golden Globe Awards.

As a director, Paxton turned in the features Frailty (2001) and The Greatest Game Ever Played (2005).

He is survived by his wife of nearly 30 years and two children.