Matthew McConaughey And The Art Of Embracing Reality Comments (0) 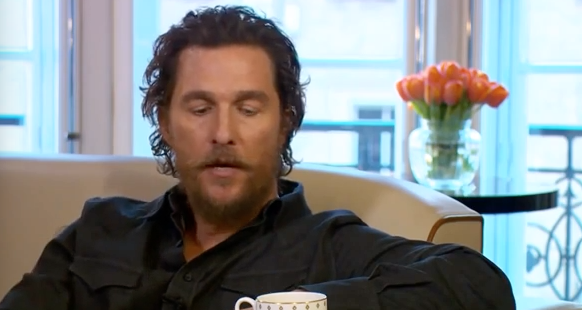 There's a big brouhaha over Matthew McConaughey's comments regarding Donald Trump, with many outlets reporting that he said we all need to “embrace” the man.

In reality, I think what he said was not as bad, and yet the context was worse.

Here is the actual, verbatim quote, which is different — but pay attention, also, to how nastily the question is framed (and the fact that McConaughey didn't object to interviewer Andrew Marr's characterization of his fellow actors):

Andrew Marr: Every single American actor or arty type who comes over to London dumps on Trump. You all completely hate him. Do you think it's time that maybe Hollywood and the cultural elite of America gave this guy a break?

Matthew McConaughey: Well, they don't have a choice now — he's our president. And, um, it's very dynamic and as divisive of an inauguration and time that we've ever had. At the same time, it's time for us to embrace, shake hands with this fact, and be constructive with him over the next four years. So anyone, even those who most strong may disagree with his principles or things he's said and done, um — which is another thing, we'll see what he does compared to what he had said — um, no matter how much you even disagreed along the way, it's time to think about how constructive can you be, because he's our president for the next four years, at least — president of the United States.

As strongly as I do object to the notion that Americans are supposed to make nice with anyone who happens to become president, he did not say we should embrace Trump. He said we have no choice but to work with him. That is not true, but it's not as disgusting as telling us to embrace him.

But the context is very clear — McConaughey agrees with the framing of Hollywood actors as cultural elites. Most Hollywood actors were poor or middle class before making it, and many made it only within the past few years. Are we really supposed to blow off their educated, articulate, principled opinons just because they're stars? Trump is nothing but a star himself.

McConaughey sounds like the type of person his interviewer is degrading — an actor speaking out of his ass and trying to sound like Gandhi because many Americans have this overwhelming urge NOT to resist, NOT to confront, to be middle-of-the-road.