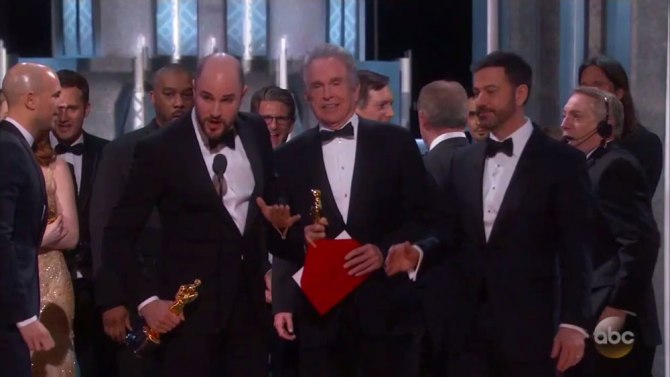 Do NOT try to pin this on Warren Beatty & Faye Dunaway! (Video still via ABC)

At the end of this year's highly entertaining Oscars came its single, solitary surprise — and it was a two-tiered doozy.

Bonnie and Clyde (1967) stars Warren Beatty and Faye Dunaway emerged to announce the winner of Best Picture, which everyone expected would be the light but charming La La Land, especially since its helmer Damien Chazelle, 32, had just become the youngest director to ever win an Oscar.

When it came time for Beatty to read the name of the winner, he appeared to be grandstanding, drawing out the moment for laughs, but in retrospect, he was genuinely befuddled. Apparently, he had been handed an envelope that read BEST ACTRESS, and the card inside read EMMA STONE, LA LA LAND; Stone had won the penultimate award.

Not knowing quite how to react, he stalled, then he showed Dunaway the card. Dunaway, who had already chided him, clearly believing he was goofing off, glanced at it and said, “La La Land.” 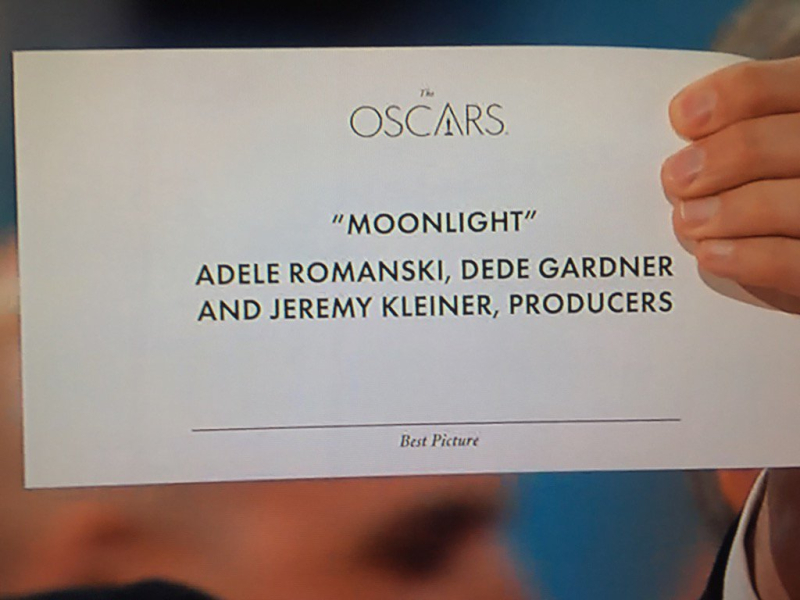 Once the producers of La La Land had begun giving earnest speeches, there was confusion onstage, with a dude in a headset dashing around frantically. (I was scared there was some kind of threat going on!) Once it became clear to producer Jordan Horowitz that his film La La Land really had not won, he graciously confirmed the error and said he was proud to hand the Oscar over to his friends behind Moonlight.

It would seem that Beatty and Dunaway were unwitting victims, having been given the wrong envelope. The firm entrusted with the envelopes keeps two of each category, and Stone confirmed backstage she was in possession of the one used to announce her Oscar, so that makes it seem pretty obvious the accounting firm goofed.

Still, I'm sure a lot of people will be treating Warren and Faye like: 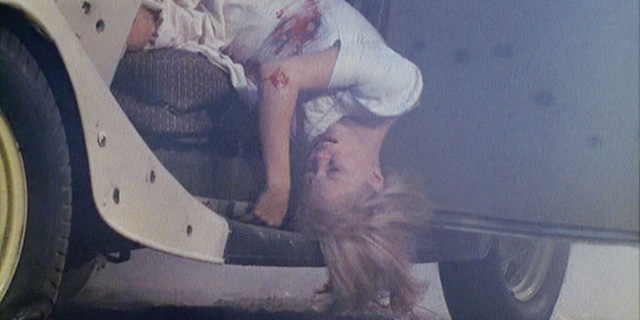 And, in fact, Faye seems to be rat-a-tat-tatting Warren — she sniped to Extra, “I'm not the one to talk to. Warren is.”

With its shocking win, Moonlight becomes the first gay-themed film to win the Oscar, seemingly avenging that time Brokeback Mountain got robbed.

However, I would point out that what happened (minus the mix-up!) was actually very similar to what happened the year Brokeback lost to Crash. That year, Brokeback won EVERY major award. It was such a foregone conclusion that it would win the Oscar, there was plenty of time for the Oscar voters to resent the expected and vote for something unexpected. (Crash's win could also have been aided and abetted by homophobia, but we'll never know how much of a factor that was.)

This year, the same thing happened with La La Land, which had been enduring a fairly loud backlash for some time.

Only difference is that this year, the unexpected winner was, in fact, a far superior film. That it was gay-themed like the superior loser of 2005 was probably just a (happy) coincidence.

Congrats to everyone behind Moonlight, a great film, a gay film, the best film I saw all year.

Watch the moment unfold after the jump ...