Jackie Evancho Singing A Different Tune About Trump ... Now That It's Too Late Comments (0)

Via People: Jackie Evancho, 16, is now trying to make it seem like her singing at Trump's 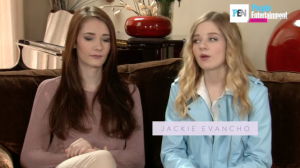 inauguration was apolitical in light of his rescinding of trans protections.

She tells People she is acting now because:

Disgusting, and a perfect example of how people think — nothing matters until it matters to them personally.

Evancho goes on to say:

My goals are mainly just to continue what I’m doing, but on a bigger scale — to inspire people, to use my voice to do good, to help people. I definitely want to change things.

Pity she didn't use her voice for good two months ago, when she used it to serenade Donald Trump.