Was Aaron Hernandez Gay Or Bi? Did That Secret Motivate Him To Kill? Comments (0)

Following his shocking suicide in prison this week, Aaron Hernandez is now the 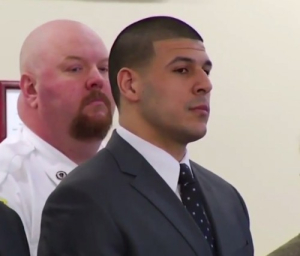 subject of a major Newsweek investigation, which seems to suggest the reason he committed murder was to protect the secret that he slept with men.

He was convicted in April 2015 for shooting and killing his friend, Odin Lloyd, seemingly without motive. But interviews with multiple law enforcement officials directly involved in the case say Lloyd — a semipro football player who was dating Hernandez’s fiance’s sister at the time — had information the football star did not want out: that he was bisexual.

One of the notes left by Hernandez was to his prison boyfriend, who is now on 24/7 suicide watch, multiple law enforcement sources confirm. Hernandez’s sexuality would, of course, not be relevant save for the fact that an intimate relationship he allegedly had with a male former high school classmate was at the center of the investigation into Lloyd’s murder.

Newsweek is jumping through hoops to justify reporting that Hernandez was gay or bisexual, but it's very relevant to this story, and possibly to the murder with which he ruined his life.

The story is fascinating — and sad.

It's also sad that the media is still so worried about reporting on people who are gay or bi before the person explicitly grants permission. That type of permission is not sought for any other aspect of a public (or criminal) figure's personality, and I think it is not helping, but is actively hurting, gay people overall.