Conservative George Will: Trump Is An Existential Threat To The United States Comments (0)

George Will, a stalwart right-wing voice for 40+ years, writes eloquently — and chillingly — of 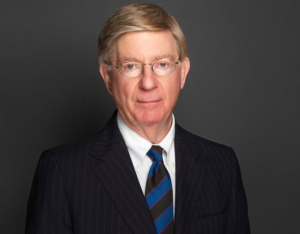 Donald Trump's overall disability, his unfitness to be POTUS.

It is urgent for Americans to think and speak clearly about Donald Trump's inability to do either. This seems to be not a mere disinclination but a disability. It is not merely the result of intellectual sloth but of an untrained mind bereft of information and married to stratospheric self-confidence.

Knows how to grab ya, huh?

Americans have placed vast military power at the discretion of this mind, a presidential discretion that is largely immune to restraint by the Madisonian system of institutional checks and balances. So, it is up to the public to quarantine this presidency by insistently communicating to its elected representatives a steady, rational fear of this man whose combination of impulsivity and credulity render him uniquely unfit to take the nation into a military conflict.

Again, this is George Will writing that a Republican president is a danger to our nation.